Sunshine ahead for Puget Sound after days of heavy rain

Sunday is expected to be dry and sunny, with highs in the 40s. 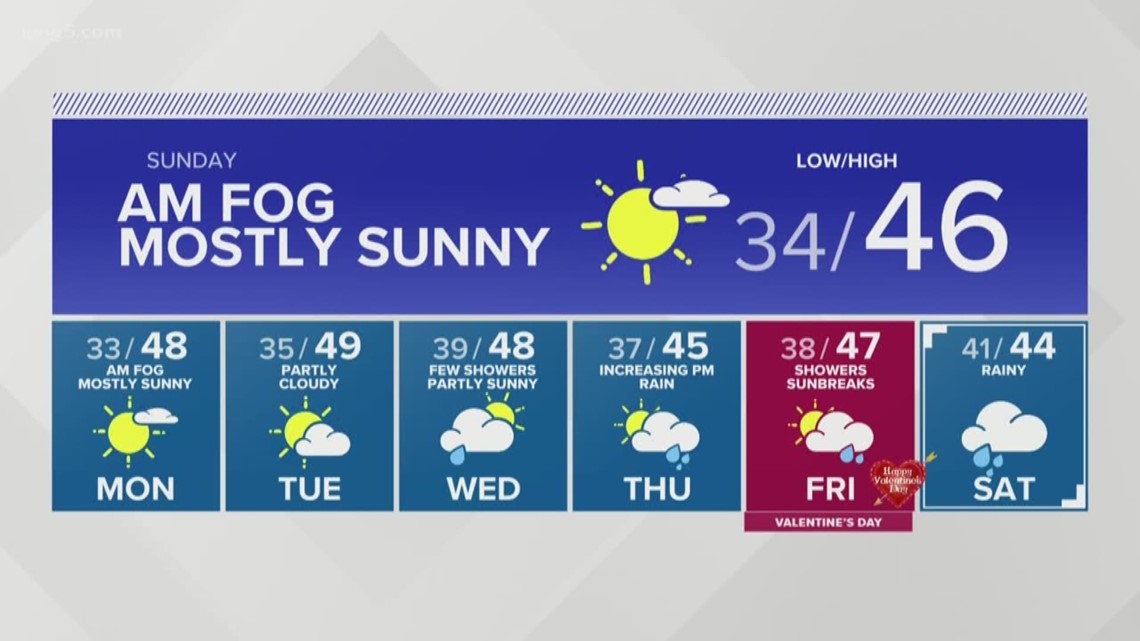 SEATTLE — Conditions in Puget Sound are beginning to dry out and sunshine is on the way for the rest of the weekend.

A front that moved through western Washington early Saturday brought gusty winds in the lowlands and more mountain snow.

Snow levels dropped to about 2,000 feet Saturday, making travel difficult at times across the Cascade passes. Snow in the mountains is expected to stop late Saturday night.

Sunday will be foggy in the morning, but then clear out for a dry, sunny day.

The sun will be a welcome sight after days of relentless rain caused flooding and landslides across Puget Sound. And while the rain is over, the risk of landslides will continue while the soil remains saturated.

Some rivers in King, Pierce, Snohomish, Lewis, and Kittitas counties remained under a Flood Warning as of Saturday, but rivers are expected to crest and start to recede over the coming days.

Gov. Jay Inslee issued an emergency proclamation for 19 Washington counties this week ahead of the significant winter weather that hammered the region.

Residents near the Nisqually Delta were urged to evacuate Thursday, especially those living east of Durgin Road, Kuhlman Road, and Cut-Off Road. Thurston County Emergency Management urged residents on Saturday to stay out of their homes until Sunday due to concerns about flooded septic tanks and wells.

Eleven people had to be rescued from a flooded Issaquah apartment complex. The city of Issaquah set up a free sandbagging station at the Issaquah Community Center. The city said the flooding throughout Issaquah and Tibbetts Creek valleys was similar or greater to the flooding that occurred in January 2009.

In Snohomish County, space has been made available for displaced livestock. The Evergreen State Fairgrounds in Monroe has 400 stalls available for farm animals affected by flooding.

Duvall's wastewater treatment plant got maxed out amid the flooding. The city was asking residents to reduce their water usage until the heavy rain that has caused flooding throughout the region subsides.