When the calf was spotted Sept. 6, the female orca appeared "energetic" and was foraging with her mother, according to the Orca Behavior Institute. 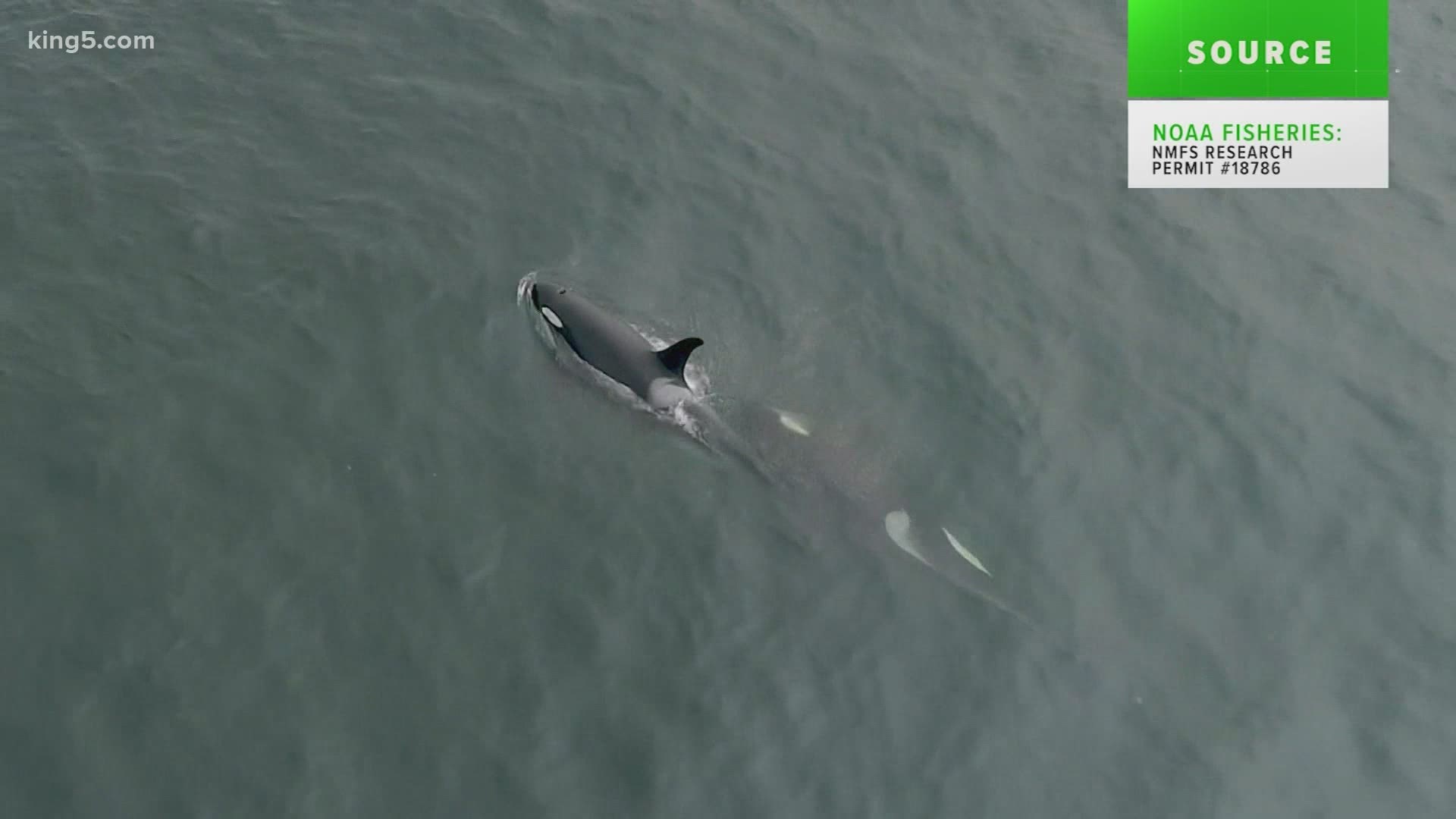 SEATTLE — A Southern Resident orca calf may not be in as poor health as originally thought.

J56, known as Tofino, is considered to be in "poor condition," according to the Washington Department of Fish and Wildlife. When the calf was spotted Sept. 6, however, the female orca appeared "energetic" and was foraging with her mother, according to the Orca Behavior Institute.

"While this in no way undermines the concern about her being in poor body condition per SR3, it does show that her situation may not be as dire as the one with J50 in 2018," the institute wrote. SR3 or SeaLife Response, Rehabilitation and Research is a science nonprofit contracted to monitor the condition of orca pods J, K, and L.

The J-Pod was spotted in Puget Sound near Kingston on Sept. 8, and J56 was believed to be swimming alongside her mother, according to the Institute.

According to the institute, J56 is thin and has always been small. However, she does not have "peanut head syndrome" that is associated with an emaciated orca shortly before death.

The Washington Department of Fish and Wildlife issued an emergency rule ordering commercial whale watch tours to stay farther away from J56 after SR3 observed the orca's potentially declining condition.

J56’s condition began to decline in September 2020. SR3 reported the female orca’s condition had declined further when she was seen again on September 1, 2021.

"We first expressed concern about J56 in summer 2020 when we measured her to be thin and also noticed her skin had a paler color tone - images collected this week show us that her condition has worsened," said Dr. Holly Fearnbach from SR3.

Whales in “poor” body condition are at two to three times greater risk of dying than healthier whales, according to a recent study published in Ecosphere.

"By comparing J56's measures of condition to young whales of similar age in our 14-year dataset, we can categorize her condition as poor, which confers a significantly elevated risk of death over the coming months," said Dr. John Durban, from Southall Environmental Associates, who works closely with SR3.

A total of 74 Southern Resident orcas make up the J, K, and L pods, according to the Center for Whale Research. As a female, J56 is important to the endangered Southern Residents' reproductive capacity.

The state urged all boaters to stay away from the Southern Resident orcas over the holiday weekend.

“We urge all boaters to give Tofino and her extended family extra space out on the water, this holiday weekend and beyond,” said Nora Nickum, Ocean Policy Manager at the Seattle Aquarium. “Extra space and quieter waters will give the endangered orcas a better chance to find salmon and share that food with each other.”

The WDFW said boat traffic can interrupt the echolocation clicks the whales use to hunt fish and research from the National Oceanic and Atmospheric Administration Fisheries indicates this is especially true in female killer whales. The females often stop foraging when boats approach within 400 yards, which is most concerning in pregnant or nursing mothers supporting calves.