The footage can help researchers determine if endangered southern residents are getting enough of their preferred prey, Chinook salmon. 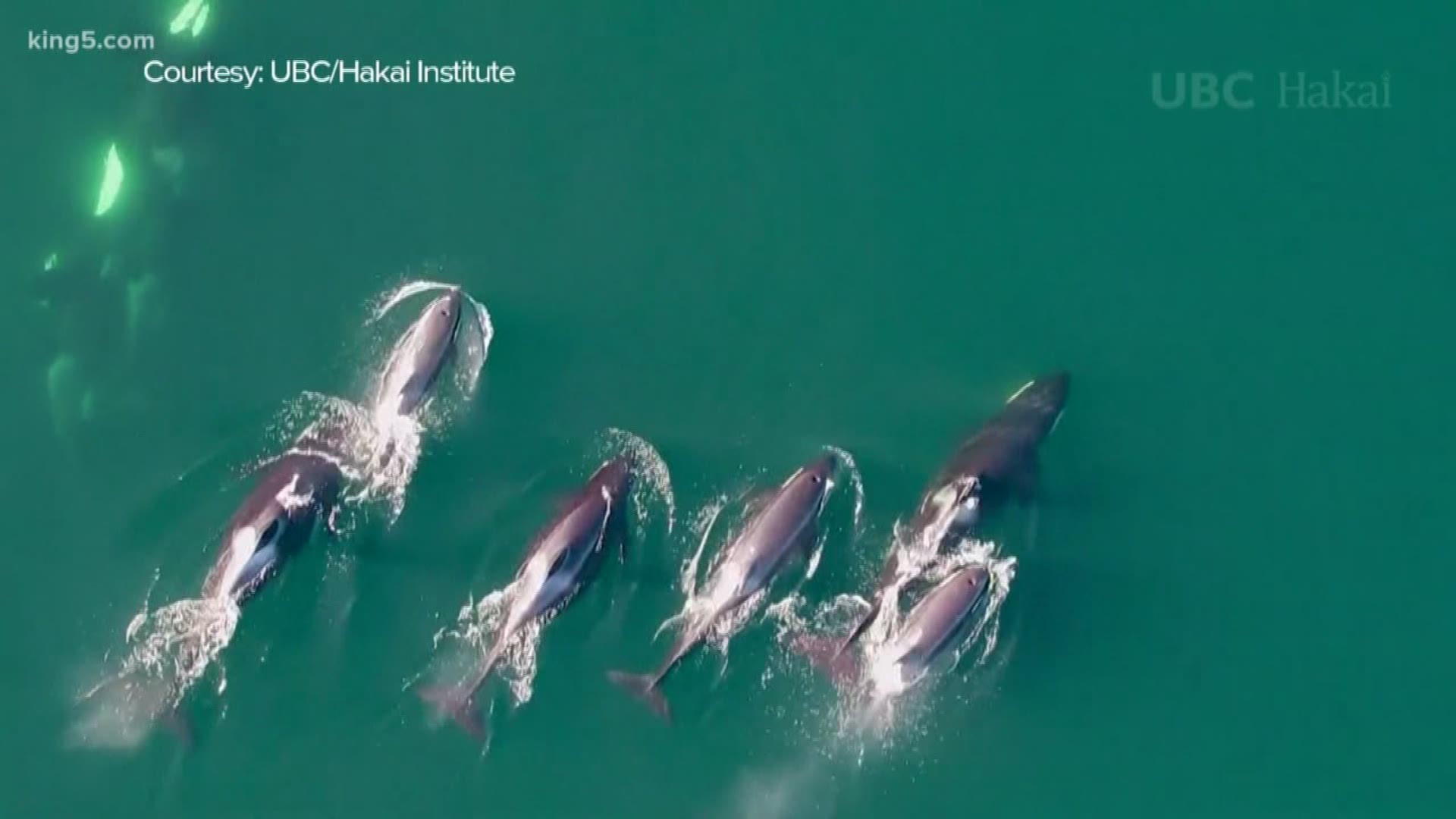 B.C., Canada — Researchers at the University of British Columbia (UBC) got a rare glimpse into the underwater life and behavior of resident killer whales with the help of drones.

Over the course of three weeks in August and September, a team at the Marine Mammal Research Unit (MMRU) at UBC monitored pods of southern and northern resident killer whales in the Salish Sea and off the coast of British Columbia.

The footage was captured non-invasively, the team said -- the drone flew several hundred feet above the whales and they didn't seem bothered by it, said Keith Holmes, a drone pilot for the Hakai Institute. Hakai Institue, a research nonprofit, collaborated with MMRU for the footage.

“It was amazing to see the southern residents zig-zagging along the surface as they chased and caught Chinook salmon,” said Sarah Fortune, a postdoctoral fellow at MMRU. “Observing both populations of killer whales means we’ll be able to compare the foraging conditions and hunting behaviors of the two groups and see whether it is more difficult for southern residents to capture prey.”

MMRU director Andrew Trites was struck by how tactile the animals' behavior was.

"They're constantly running into each other and touching, and I hadn't appreciated that in all my years on the water just watching them surface and breathe and drive," he said. "Just how much touching, they are really are touchy-feely whales."

The team also collected environmental data like water temperature and salt content of the water. Underwater microphones called hydrophones were used to record sounds of the pod, and traditional tagging methods were used to gather data on individual whales.

Researchers have 10 hours of footage to look through. 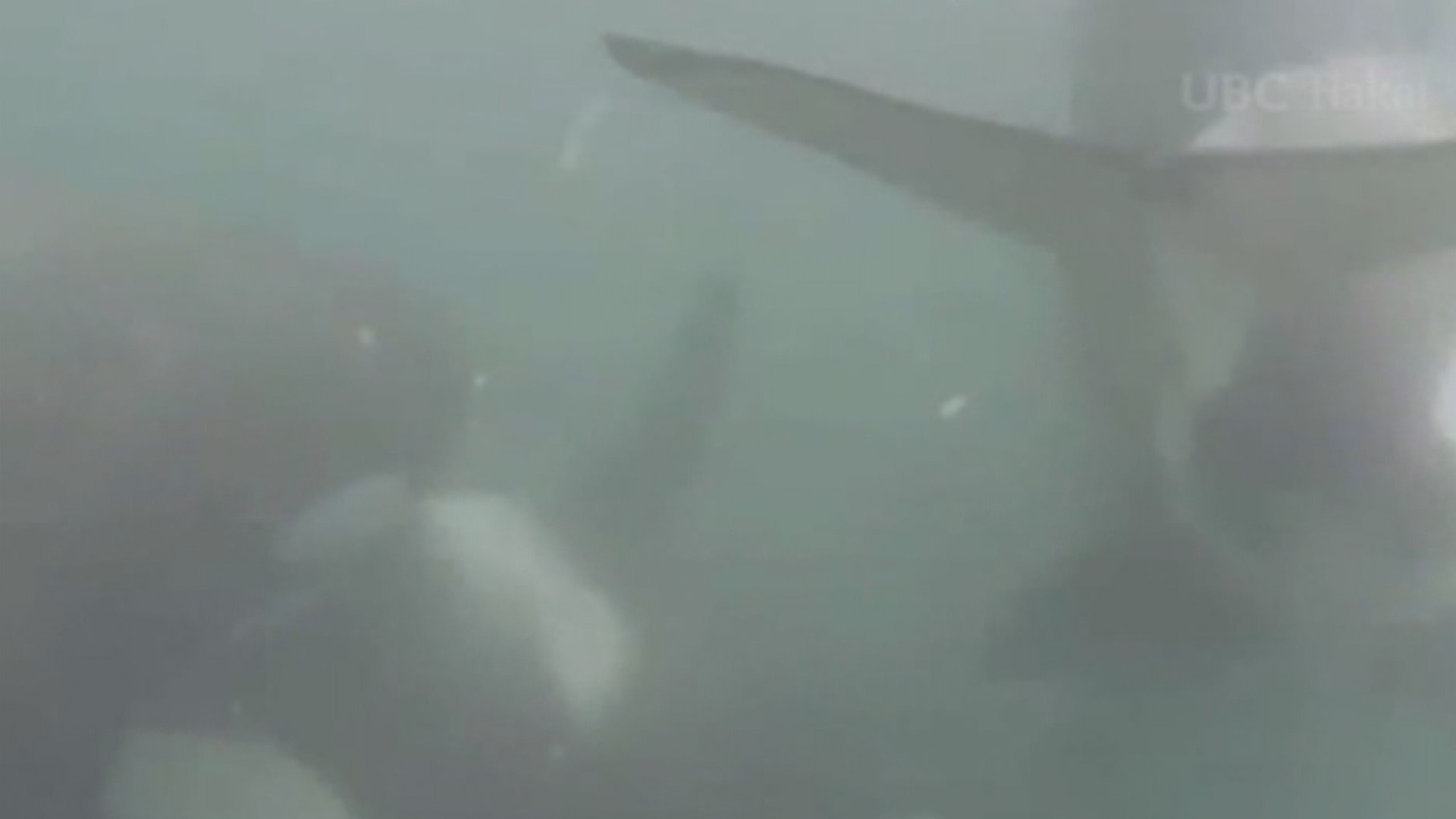 Unlike their southern counterparts, the northern resident orca population has increased significantly since the 1970s and is now estimated at over 300 individuals, according to UBC.

At last check, the southern resident orca population was 73.

Both the northern and southern resident whales face similar threats-- water and noise pollution, increased shipping traffic and a reduction in the availability of food.

The footage can help researchers determine if endangered southern residents are getting enough of their preferred prey, Chinook salmon. Lacking past data on availability, the team will use northern residents for comparison.

“A key part of this puzzle is figuring out where their prey is,” said Mei Sato, a research associate at MMRU. “We used hydro-acoustics to eavesdrop on the fish and gather information about the number and depth of Chinook salmon available to killer whales in the area.”

With the declining population of the southern orcas, researchers have been keeping a close eye on the life of a new calf, J56.

Drone footage captured 3-month-old J56 and her mother J31 near the Fraser River in British Columbia in August.

The calf was observed over two days carrying a fish in her mouth, although calves only drink milk during their first year of life.

This simple behavior raises a whole new bar of questions for scientists: was the calf learning to hunt from other members in the pod? Was she simply playing?

On top of studying the whales' behavior, the team will analyze footage and try to build a comprehensive picture of resident killer whale feeding behavior.

Though it's too early to share their finding, Trites said they do know this - the intimate images of the whales stirred emotional reactions.

"Every scientist here looking at this feels what every lay person feels too: a connectedness, an ability to relate to an animal that is not us in any way, but is so relatable," he said. "So it also reminds people what we're trying to save."