Contaminants in Puget Sound and in Washington rivers have negative impacts on both salmon and Southern Resident orcas. One community has worked hard to help both by cleaning up a West Seattle creek. 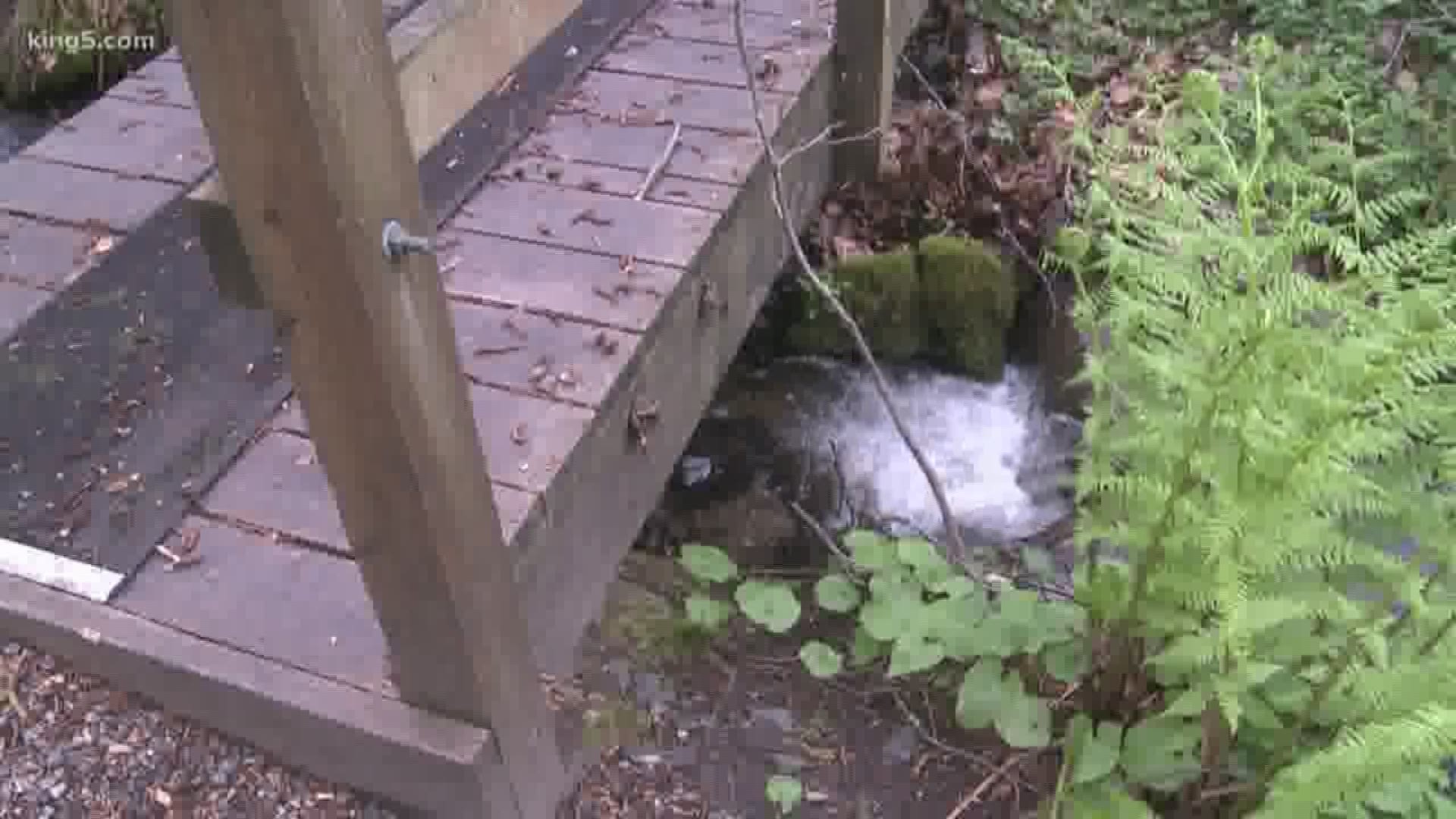 SEATTLE — Years of fishing have prepared volunteer Dennis Hinton for his daily checks for salmon in West Seattle’s Fauntleroy Creek.

The creek was essentially dead for decades. It served as a drainage ditch with dirty water that fish couldn’t swim up.

"It went the way of many urban streams and became a dumping ground," Hinton said.

Many urban streams are filled with toxic stormwater runoff, which is lethal to coho salmon. They gasp for breath and eventually die. It's why Hinton is always amazed when he spots both adult salmon swimming in the creek to spawn, and young ones who are on their way to the ocean.

"You look for a fluttering tail in the water. A lot of times they see you first and they will dart around so you can just watch the water," Hinton said. "It's just exciting to me and a lot of people don't understand that. The other day I came down here with a lady who had never been down here before and we found four smolts."

Several decades ago, Judy Pickens bought property near the Fauntleroy ferry terminal that the creek runs through. She admits she didn't initially want to get into salmon habitat restoration.

Thanks to her willingness and the help of volunteers, new vegetation, a fish ladder, and other improvements have turned the once dirty drainage ditch into a creek that welcomes dozens and sometimes hundreds of coho salmon each year.

"It's rewarding to know that what we started has had a major ripple effect," Pickens said. "They are great advertisements for the major environmental work that is going on and needs to go on outside of the city."

Although Fauntleroy Creek is home to coho salmon, it's Chinook salmon that make up the main prey for the Southern Resident killer whales.

In addition to stormwater pollutants, the whales and their favorite food also battle contaminants like drugs and chemicals that make it through wastewater treatment plants. Sometimes the fish absorb the toxins in the runoff, which then wind up in the whales then the fish are eaten.

Coho are often seen as an indicator for salmon health, which is why Pickens looks at the creek in her backyard as an important messenger for the public.

"They will recognize that salmon are critical to orcas, whether those salmon are Chinook or chum. It doesn't really matter. They're salmon. It's a simple message. Salmon are important so how do we keep them here?" Pickens said.

We didn't find any fish on our search a couple of weeks ago, but Hinton will be back tomorrow just like he is every day.

"This is not the Columbia River, but it is a little something to feel good about and feels good to nature. In our own minuscule way, saving the world, one salmon at a time," Hinton said.

Join us on April 30 and May 8 from 7:30 pm – 8:30 p.m. for live expert panels discussing themes central to the livelihood of Southern Residents. Visit KING5.com, our Facebook page or YouTube page to ask questions and make comments directly to those on the front lines of recovery. Learn more about our “Saving the Orcas” series here.