Projects on two Washington rivers could increase habitat for Chinook salmon, the main prey for the endangered Southern Resident orcas. 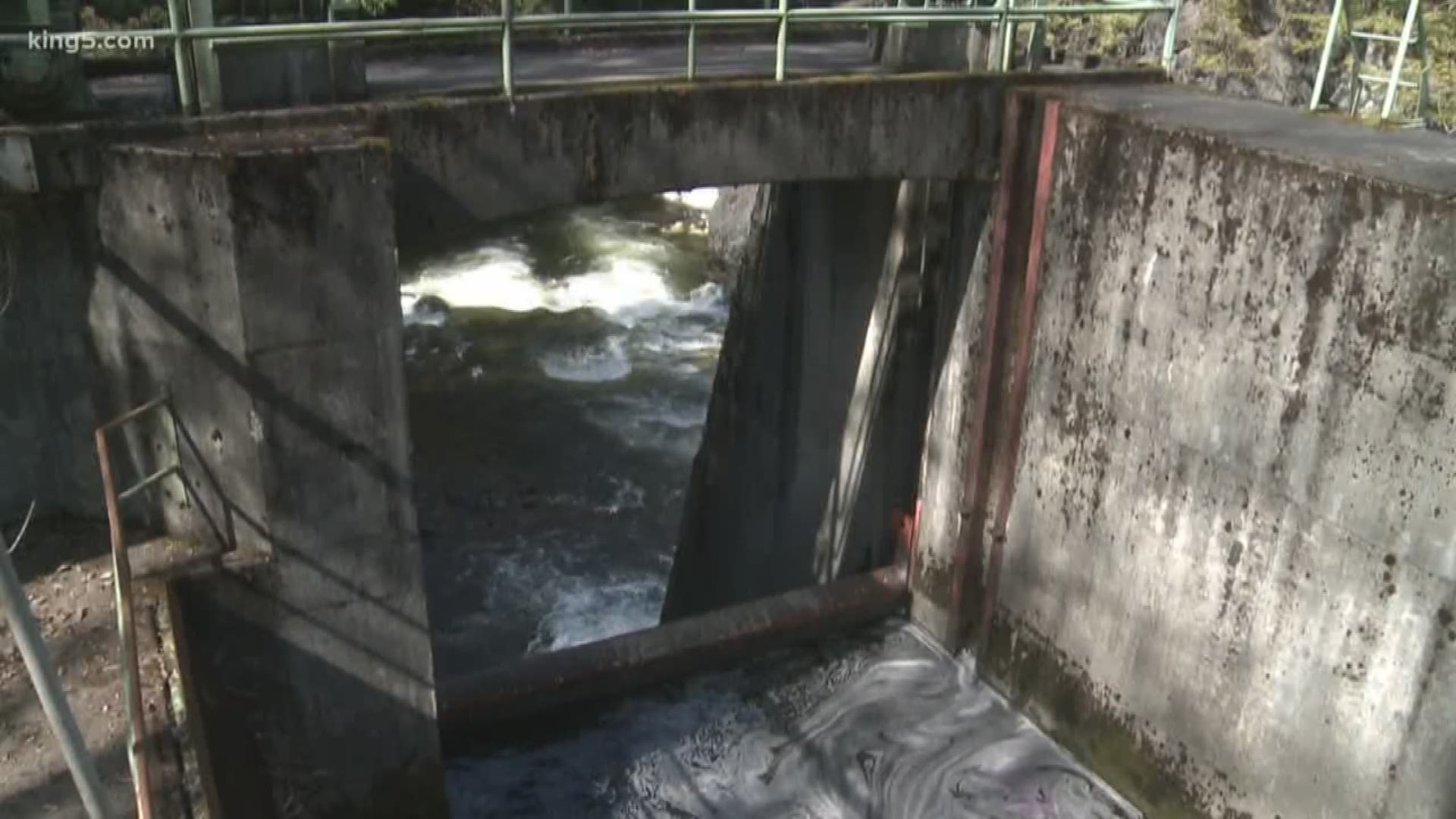 ACME, Wash. — Hundreds of miles of river habitat are cut off to salmon because of dams and culverts around western Washington. Dealing with fish passage is a focus for Washington officials trying to produce more Chinook salmon for Southern Resident killer whales.

Removing a dam on the middle fork of the Nooksack River is personal for Bellingham Mayor Kelli Linville.

"My dad was a commercial fisherman who ended up owning a fish processing plant up in Blaine," Linville said.

The dam, built to divert the river for Bellingham's drinking water, cuts off salmon habitat.

"When the fish come up they get to the dam and they can't swim over the dam, so they have to stop," said American Rivers Project Manager April McEwen.

Also see | Should seals and sea lions be killed to help save the orcas?

McEwen is helping spearhead the work to remove the dam while still maintaining diversion for Bellingham's water supply. Removing the dam will open up 16 miles of historic habitat for salmon in clean cold water flowing from Mount Baker.

"We are actually going to maintain the water diversion by placing it upstream. It will be a smart infrastructure that allows the water diversion to be maintained while we remove the dam,” McEwen explained. “Then we will remove the dam and restore access and fish passage, restore the channel through the site, and restore access to upstream habitat.”

Salmon are getting a different solution on Washington’s White River. The largest fish trap in North America will soon be located downstream from the Mud Mountain Dam.

"The existing fish trap was designed to pass up to 20,000 fish per year. We have used it to pass more than that, but it still isn't supporting the massive number of fish returns that we are seeing yearly,” explained U.S. Army Corps of Engineers Project Manager Leah Hauenstein. “The new fish passage has been designed to pass 1.25 million per year and up to 60,000 fish per day.”

Hauenstein said the fish trap was designed by more than 150 engineers from five different organizations.

Salmon swim up a ladder and into the trap. Then a truck will move them upstream and release the fish above the dam in an area with pristine water flowing off Mount Rainier that is perfect for salmon.

"If we did not have a trap here with our damn, we would have a loss of tens of miles to hundreds of miles of habitat. We would have fish runs that are much lower than they currently are, and they might actually go extinct. There may not be enough habitat for some of these fish," said Fish Biologist Fred Goefz.

State funding is already secure for the $112 million project.

"We are just one river basin of 14 you find in Puget Sound, but this is one of the most important basins. It is one of the largest. It has spring Chinook salmon which is one of the preferred kinds of salmon that orca eat," Goefz said.

Funding for the project on the Nooksack River is still waiting for state approval. It's shovel-ready with commitments from the federal government, private foundations, and the city of Bellingham.

"The only partner missing is the state, and the state has said this is a top priority project," McEwen said. "Actions speak louder than words and we believe the state will deliver on this."

Advocates for the Nooksack River project said it could increase salmon runs by 31%.

"It is a great opportunity to not let generations of children think that every river should be dammed," Linville said.

Join us on April 30 and May 8 from 7:30 pm – 8:30 p.m. for live expert panels discussing themes central to the livelihood of Southern Residents. Visit KING5.com, our Facebook page or YouTube page to ask questions and make comments directly to those on the front lines of recovery. Learn more about our “Saving the Orcas” series here.