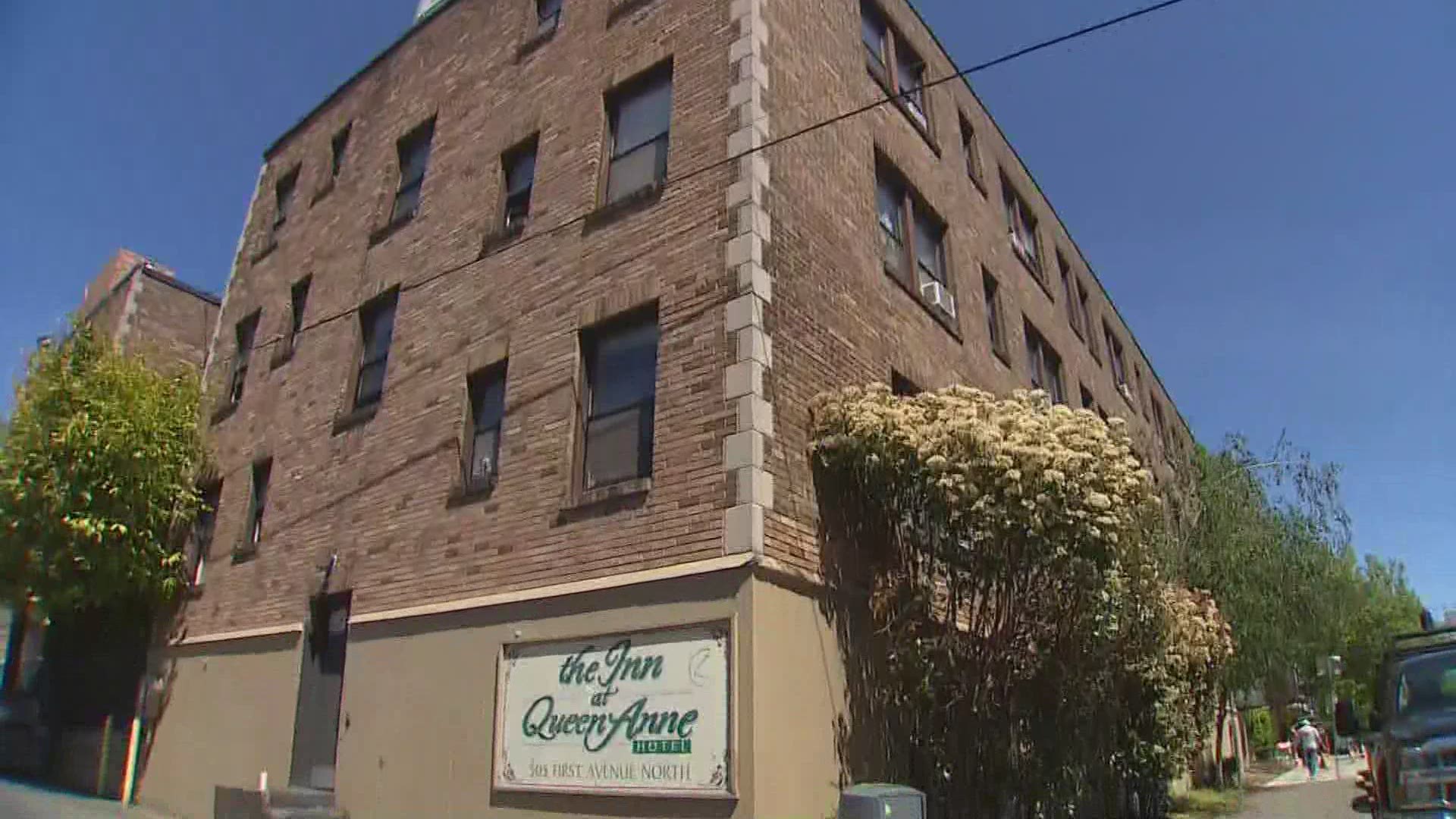 During his State of the County speech Tuesday, Constantine announced the county purchased the Inn at Queen Anne on First Avenue in Seattle's Uptown neighborhood to serve as immediate permanent supportive housing for the chronically homeless.

The county had been leasing the property, which includes 80 rooms, and had already been using it in that capacity.

However, new funding through a 0.1% sales tax approved by the county council last fall allowed the purchase as part of the new "Health Through Housing" plan.

All told, the county is aiming to spend $350 million to $360 million on the plan and house up to 45% of the chronically homeless in hotels by October 2022.

RELATED: King County plans to buy a dozen hotels to house homeless in 2021

In an interview prior to his speech, Constantine suggested the concept has its benefits.

"These are the folks in the tents under the overpasses, people who've been really struggling out there for years in some cases,” Constantine said. “It's an exciting change, because it allows us to get people stabilized, rested, allows people to get cleaned up and begin taking stock of their lives, being able to accept the services that we can provide and to start to move forward again finally."

On-site care will be provided, per Constantine, by Catholic Community Services.

State Senator Joe Nguyen, (D) White Center, who is challenging Constantine says it is a step in the right direction, but not nearly enough for the needs of the community.

“We have to do more because even the proposals at hand will be a very small dent in the whole issue of homelessness that we're facing right now. We truly do have to tackle the root causes of homelessness,” he told KING 5.

Constantine made the case that the pandemic and ensuing economic downturn opened up hundreds of hotel and motel rooms through the county. He claimed the plan and use of funds is quicker in addressing the homelessness crisis than building affordable and permanent support housing units that could take years to construct.

“It is similar to permanent affordable housing units. But those take years to build and cost hundreds of thousands of dollars," said Constantine.

The executive said the Inn at Queen Anne is just the first of several purchases planned or in the final stages of completion.

"They will not all be in Seattle," he said. "Because this homeless crisis is countywide and well beyond the borders of the county, there will be probably at least one other hotel in the short-term in Seattle."

Seattle Mayor Jenny Durkan's office said it has been aware of the county plans in the Uptown neighborhood and that the county has been directly involved with outreach in the community.

Outside the Inn on Tuesday, a pair of tenants said the county’s move has been life changing.

Terry Jones, 57, said he had been bouncing from shelter to shelter, on and off the streets for nearly 15 years.

Since being brought to the Inn early on the pandemic, “I feel more stable than I was, and safer,” he said.

Juliette Williams, 59, also told a story of escaping a violent relationship and staying in shelters, including one where she lost everything except a pair of photos.

“Every day was a struggle. There was no permanence.  It was difficult to think about the future,” she said. “Every night was a struggle to see where you were going to lay your head, so if you left during the day, you weren’t guaranteed a spot.”