Free COVID-19 tests will be available in SODO and Bitter Lake starting Friday through a partnership between Seattle and UW Medicine. 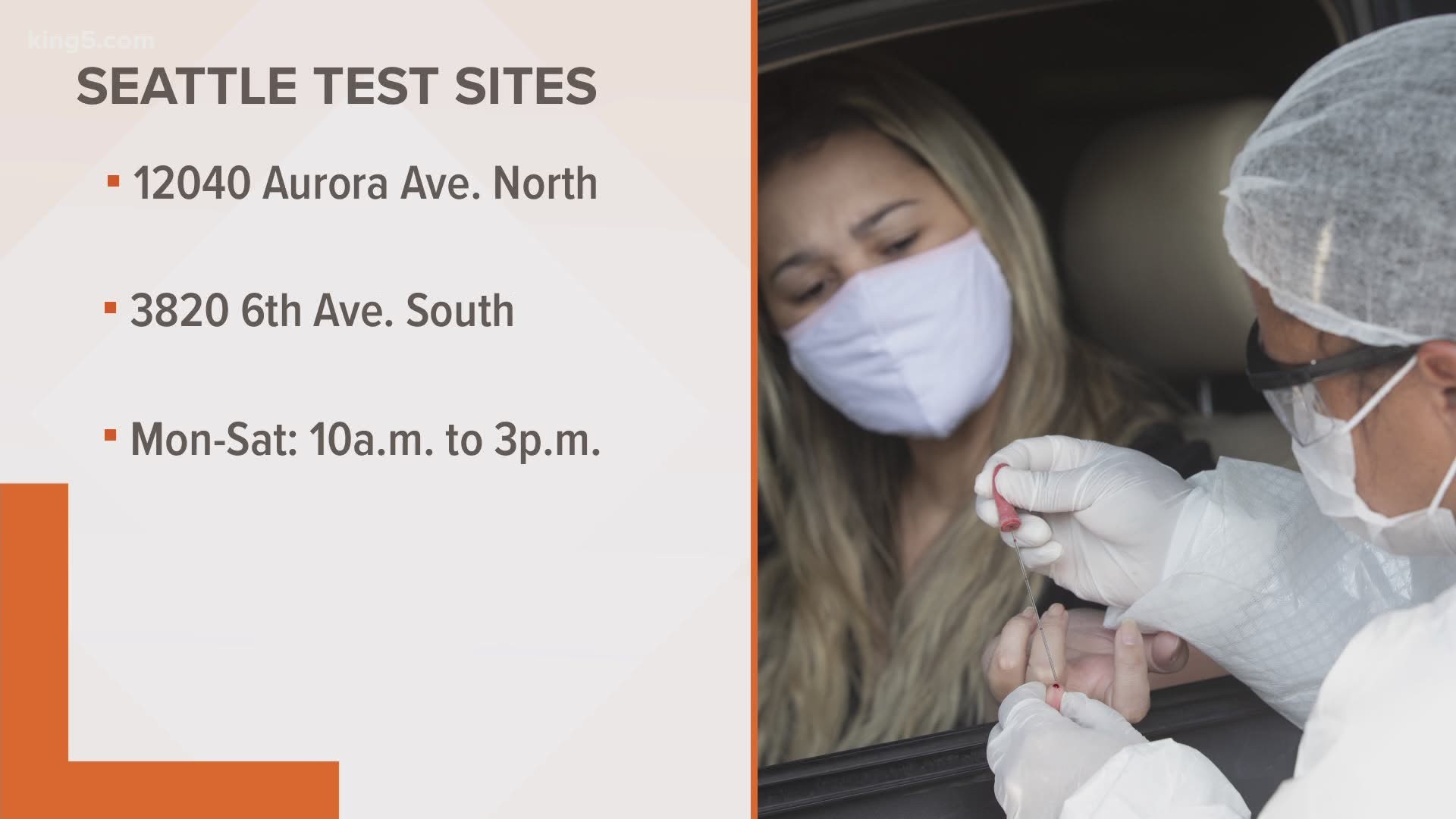 SEATTLE — Seattle Mayor Jenny A. Durkan and other local officials announced a new partnership with UW Medicine to advance widespread coronavirus testing across the city of Seattle, starting Friday.

"This partnership will give us the ability to do testing at the scale we need to do as we reopen society and reopen businesses so we can keep control of this virus," Durkan said.

Seattle and UW Medicine aim to expand to 1,600 tests a day, Durkan said.

Clients will not be charged for the testing, and will not receive a bill. Beginning Friday, two drive-up testing sites will be available at two former emissions facilities, one in the north end at 12040 Aurora Ave. N., and in the south end in SODO at 3820 6th Ave. S.

The testing will be available Monday through Saturday from 10 a.m. to 3 p.m.

The city already has testing sites set up throughout the city, including in downtown Seattle and Rainier Beach and several other locations.

"Our goals for the site is to remove barriers," said Seattle Fire Chief Harold Scoggins.

Durkan also said the city will be looking into opening other locations as well, including in West Seattle and opening a mobile site, so people involved in the recent and ongoing protests against George Floyd and police brutality can get tested.

People will have to sign up through the city of Seattle’s COVID-19 resource page at seattle.gov/covid-19.

Durkan lauded the partnership with UW Medicine, saying that it helps Seattle and King County residents despite what she described as a lack of federal leadership.

"To this day, cities do not have the equipment they need to adequately test residents. We’ve been forced in a situation where it’s city vs. city and state vs. state in almost a ‘Hunger Games’ mentality trying to secure tests in almost any way possible," Durkan said.

"We truly have been looking everywhere to source test kits, including in foreign countries and trying to get a stabilized service," Durkan added.

Public Health – Seattle & King County Director Patty Hayes encouraged people with mild symptoms to get tested during the onset of symptoms, as well as those who have been exposed to coronavirus patients, saying there is now enough resources for everyone to get tested.

Hayes added that the county is also expanding testing outside of Seattle.

City officials outlined how to sign up for the testing and what to expect in a briefing on Thursday afternoon: