Traffic overall in the state remains down, but as researchers found: it really all depends on the route you take. 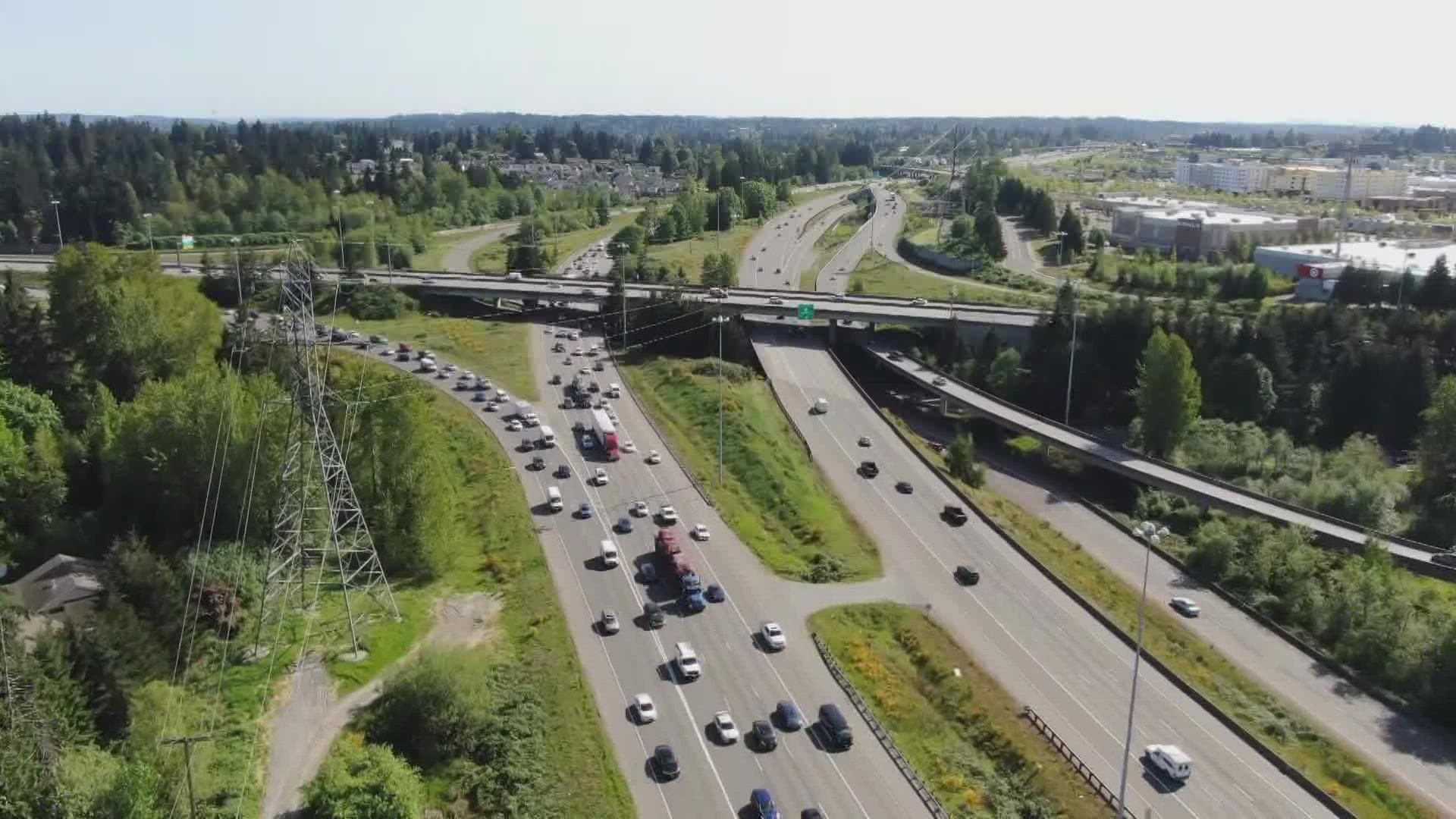 SEATTLE — Traffic remains down 6% overall around Washington state, according to data collected by the Washington State Department of Transportation (WSDOT) and added to the department's COVID-19 Multimodal Transportation System Performance Dashboard.

“If you just look at car traffic, it’s really interesting,” said Michael Forbis, WSDOT’s regional assistant traffic engineer for operations in the state’s northwest region. “I think if you look at Snohomish County and King County, you really see the effect of telework.”

Telework, or working from home, is still a reality for some people. According to the Downtown Seattle Association, just over three-quarters of office workers in downtown Seattle are still working remotely and not coming to the office.

But that does not mean traffic is down everywhere. In some places, it's actually up.

“If you go outside of the city to the suburbs like Redmond-Bellevue, Bellevue-Renton, we noticed that those travel times are at or above 2019 levels," said Bob Pichue, a traffic engineer for Kirkland-based INRIX, which monitors traffic around the world. INRIX collects data by primarily tracking the movement of cell phones.

On the morning commute from Bellevue to Renton, INRIX found travel times are where they were in 2019, pre-pandemic, but the evening commute is actually two minutes longer than 2019. In contrast, INRIX calculated that the commute from Everett to downtown Seattle is seven minutes faster.

"If was bad before, there’s a really good chance it’s bad now,” said Pichue, noting that capacity, the throughput of cars can reach its limits, but said those backups tend to be less lengthy.

Pichue pointed to the overall Tacoma to Seattle commute which, despite hitting the brakes heading into downtown, is four minutes shorter in the morning but still tied with 2019 for the evening commute at 56 minutes, based on data from earlier in September.

There are, however, some wildcards to come.

One being the University of Washington (UW), which employs tens of thousands of workers and has thousands of students in attendance, some of whom commute.

The UW starts its fall quarter on Sept. 29. Forbis, with WSDOT, said he wonders about the impacts come Oct. 2 when Sound Transit's Northgate Link light rail station opens. The WSDOT dashboard also tracks transit ridership across systems statewide, which is still down 38%.

What does the future hold?

"I don’t think we really know,” said Forbis. “I think it’s going to stay down for a while. Everybody is going to have to come back to work before the traffic comes back to what we 'hate' to call normal.

“Traffic’s going to come back, and it’s going to look a little bit different, especially over the next six months,” said Pichue with INRIX. “So, for example, you won’t see such a bad morning peak every day, the morning grind [into work]. But you may see a really bad afternoon grind heading out of the city. The midday may look a little bit busier on an I-5 or 405 instead of the mornings."