What drives big wildfires in western Washington? This meteorological phenomenon is a factor

Western Washington doesn’t always get strong east winds, but when the winds do arrive, they can lead to huge wildfires. 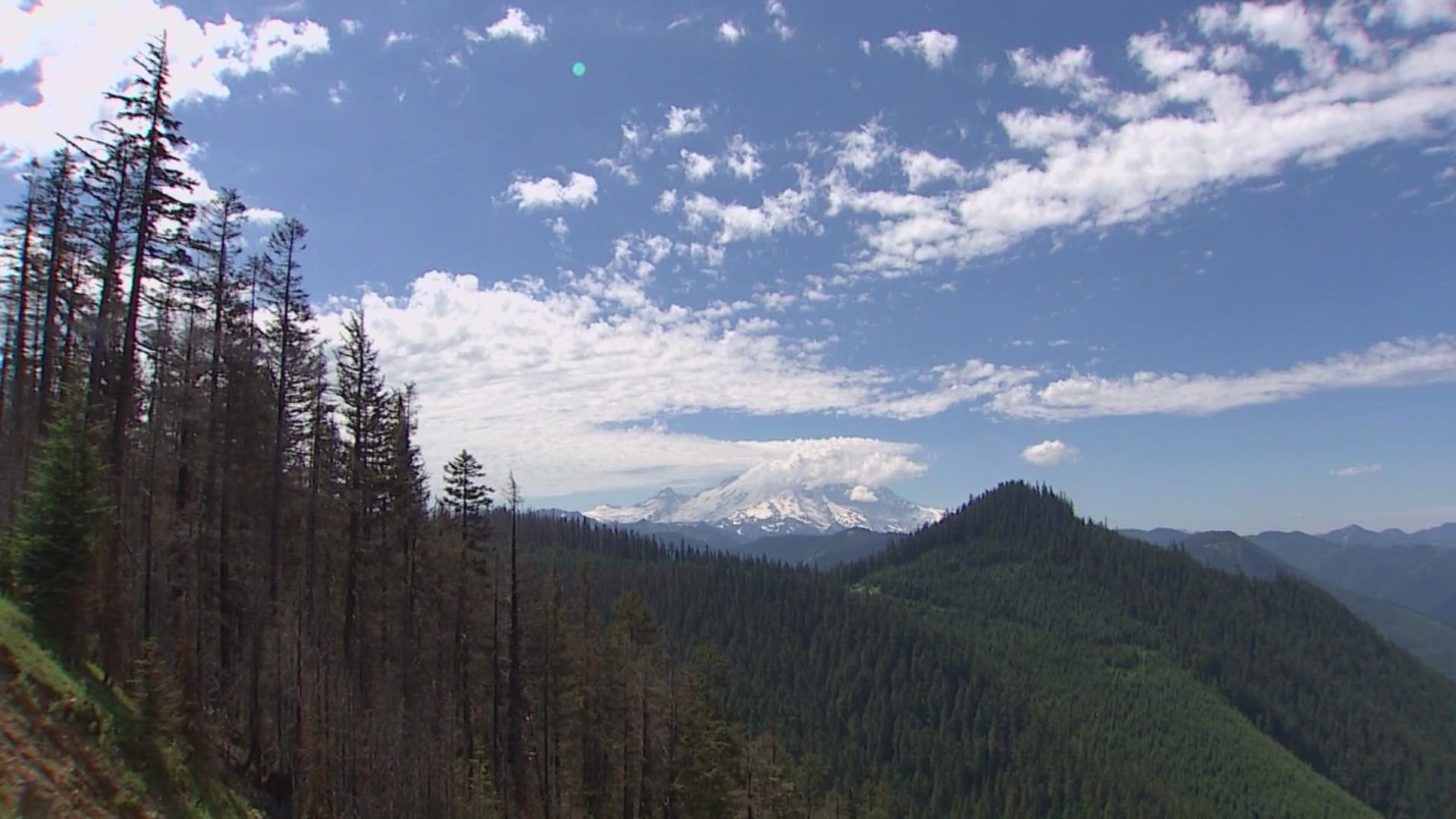 SEATTLE — Strong wildfire-driving winds from the drier eastern half of Washington state have been compared to the Santa Ana winds of southern California. The Santa Anas year after year have driven many of the state’s fast-moving wildfires.

The difference is these strong east winds in Washington don't happen nearly as often. When they do occur, they have led to record-setting wildfires on what we typically think of the wetter western side of Washington state.

"West side fires have a certain recipe," said Dan Donato, a research scientist with the Washington State Department of Natural Resources (DNR), which serves as the state's largest wildland firefighting agency.

He said that recipe includes "summer drought, an ignition source and, for the biggest events, a big east wind."

He made the comparison to the Santa Anas.

Veteran DNR firefighter Charley Burns, who is now retired, likened that recipe to a stack of Swiss cheese slices. Where the holes line up, that's when you get a problem.

First, a little history on wildfires and east winds in the Pacific Northwest.

A massive fire in 1902 known as the Yacolt Burn tore through a large chunk of southwest Washington and northwest Oregon. It stood as the largest wildfire recorded in Washington's history as a state until 2014. Another massive fire in Tillamook, Oregon in 1933, performed in much the same way.

"The Tillamook Burn burned 250,000 acres in a 24-hour period, driven by east wind," said Donato. "And the Yacolt Burn traveled 30 miles in 36 hours…and the best way to think about west side fire events is that they're a wind event that has fire in it."

Not all western Washington and western Oregon fires driven by east winds have to be as massive, and they're not just material for the history books like the Yacolt and Tillamook burns.

The 2020 fires in Oregon that burned into the Portland metro area were driven by east winds; so was the Sumner Grade Fire in Pierce County, Washington. Though the Sumner Grade event was much smaller than the Oregon fires at 500 acres, it destroyed and damaged homes and was yet another wake-up call for people living on the west side of the Washington Cascades.

"None of the events from 2020 are surprising from a historical perspective," said Josh Halofsky, a research scientist with DNR. "It also turns out they burned in the same places as fires way back to the 1850s."

Mountains and valleys channel the strongest winds to some locations as they block and shield others.

RELATED: New base will improve response to growing number wildfires in western Washington

DNR, the University of Washington's Climate Impacts Group, state climatologist Nick Bond, who is also with the UW, and others are collaborating on a study of these east wind events.

One series of questions the team is trying to answer is are we more likely to get more frequent fires and potentially huge devastating fires west of the Cascades?

"It's not necessarily that there will be more of these east winds," said Bond, when considering the impact of climate change. "It's a special set of weather circumstances to get fires on the west side of the Cascades and the key is the east winds."

"The fires tend to be rare, but they tend to be large. And that's what keeps people concerned about that," Bond added. "Moreover, we know there are windy spots and less windy spots."

Yet, Bond is also concerned that the state and the wetter west side of it will keep drying out. And while our perception of the green treed west side is that of a rainy place, the summers can be drier than places in the American southwest.

"We have a Mediterranean climate," said Bond. "Wet winters and dry summers, and if anything, that's becoming even more the case."

The study, which could be finished in about a year, aims to help fire departments and state and federal fire managers better understand and better plan for the risks when east winds kick up and where those risks are the greatest.

Yet, while there is much to be learned, this is what they do know. Most fires are started by people. As of late August, there are already more than 1,600 reported fires in Washington, with more than a third of those fires and fire starts on the west side of the state, according to DNR. The agency also considers that a record for the state.

Many of those fires started as people burned debris piles early in the season. An ignition source is one of the ingredients in the recipe for a large west side fire driven by an east wind.