Uber and Lyft drivers in Seattle will make $16.39 per hour starting in January 2021, plus expenses incurred on the job like gas, car insurance, and car-tab renewals. 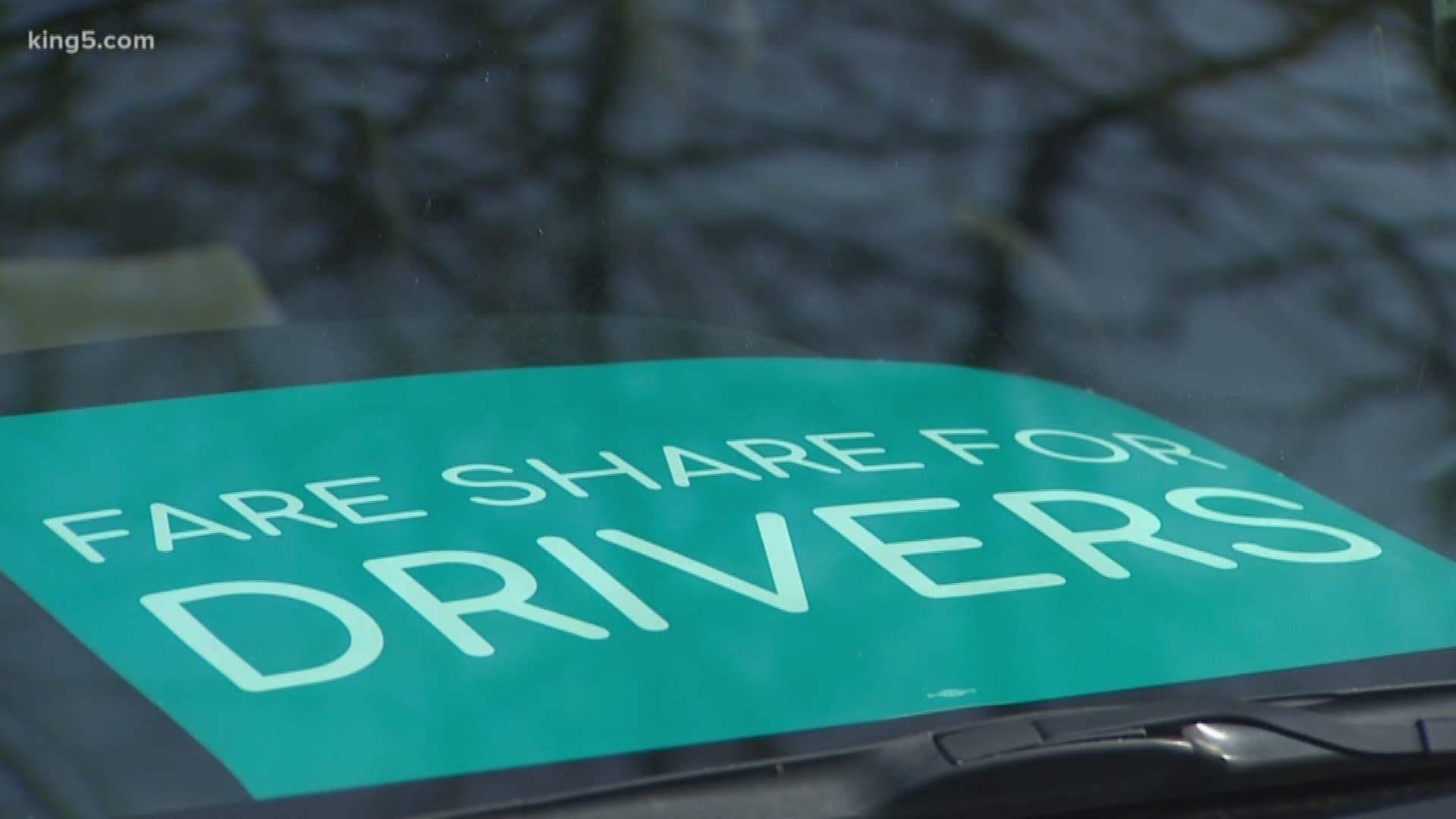 Editor's note: The above video previously aired on KING 5 in 2019 when the "Fare Share" legislation was approved.

Rideshare drivers operating in Seattle will be paid $16.39 per hour starting January 1, 2021. Uber and Lyft will also be required to compensate drivers for expenses incurred on the job such as gas, car insurance, upkeep, and car-tab renewals.

The change comes following an independent study commissioned by the city that evaluated average hourly work and expenses for drivers as well as costs to drivers such as paid sick and safe time, worker's compensation, and unemployment.

A study by James Parrott of The New School and Michael Reich of the University of California, Berkeley, found drivers in Seattle are making $9.73 an hour after expenses, which is well below the standard minimum wage.

“Gig workers is a growing part of the Seattle economy,” said Mayor Durkan during a press conference Thursday. “We knew so many of our residents were working without their fair share of wages, we want to make sure every worker in Seattle makes at least minimum wage.”

The legislation increases rideshare driver’s wages by 30%, according to Mayor Durkan. The mayor also said approximately 84% of drivers will see their earnings go up because of the new legislation.

When the legislation was approved last year, Uber and Lyft were already paying an existing city fee of $0.24 per ride to fund wheelchair accessible taxis and regulation of the industry. The Fare Share plan will impose an additional $0.51 per ride charge on Uber and Lyft that would allow the city to invest more than $52 million for housing near transit, and $56 million to fully fund the Center City Connector streetcar.

The additional ride charge has not been levied on any trips this year and will not be until either Uber or Lyft reaches one million rides in a quarter, a city spokesperson said Thursday.

That stipulation is because of reduced ridership due to the coronavirus pandemic, according to a city spokesperson Thursday.

Uber and Lyft have previously expressed concern about the additional ride charge, saying it could make rideshare transportation less affordable.

Lyft issued the following statement Thursday in response to the mayor's announcement:

"The mayor’s plan is unworkable. It would require TNCs (Rideshare companies) to double pay drivers who are using multiple rideshare or delivery platforms at the same time, as well as pay people to simply have an app open, even if they are not working. This kind of misguided regulation will actually destroy jobs for thousands of people and drive rideshare companies out of Seattle. Lyft has been clear that it supports smart benefits for drivers without taking away their independence or kicking people off the platform. In California, Lyft is offering drivers up to $367 per month for health care premiums, accident and disability insurance, and a guaranteed earnings floor that in Seattle would equal on average more than $26 per hour without kicking a single driver off the platform."

The mayor's plan also calls for the establishment of a Driver Resolution Center, a $17.75 million project. The resolution center will provide drivers with support via arbitration and appeals for anyone who claims they were unfairly deactivated by Uber or Lyft. It will also offer outreach and educational services for drivers who are immigrants and refugees.