The Sauk-Suiattle Tribe said Chief Seattle would never accept salmon getting blocked from accessing their habitat, as Seattle's dams do on the Skagit River. 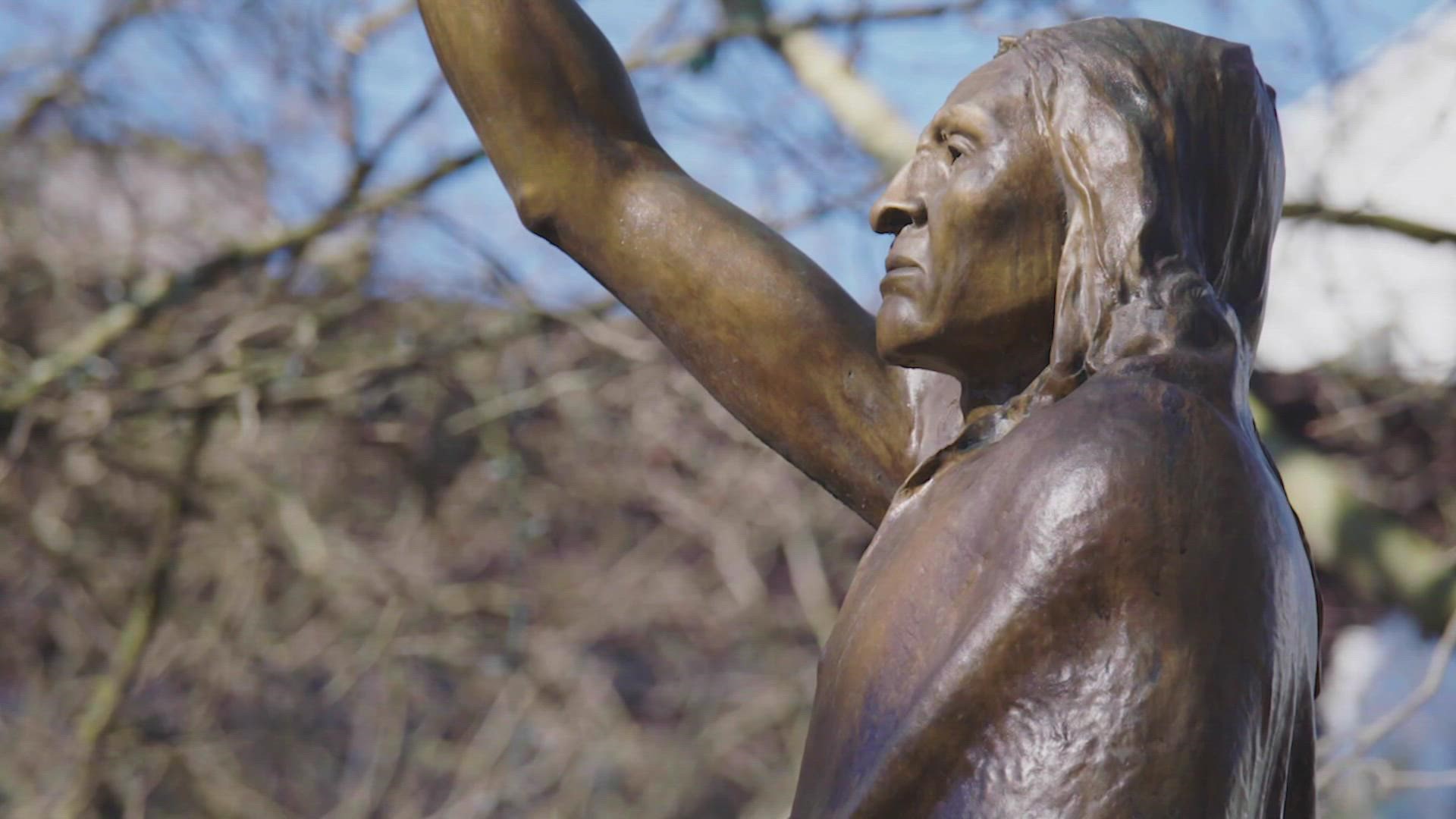 SEATTLE — In an Aug. 6 letter to Mayor Durkan and members of the Seattle City Council, the Sauk-Suiattle Tribal Chairman wrote the city needs to commit to building infrastructure for salmon to get around Seattle’s dams on the Skagit River, or stop using the image of Chief Seattle as the face of the city.

To date, neither the mayor nor any member of the city council has responded to the tribe.

“Sealth, or Chief Seattle, was a person known for his integrity. He believed there was no separation between people and nature. In tribal culture, the bestowal of a name carries with it a duty to live up to that name,” Tribal Chairman Nino Maltos wrote. “City of Seattle, live up to the values of your namesake or cease bearing his image as the Great Seal of the City of Seattle.”

All three Skagit Valley Treaty Tribes and every natural resource agency in the region have submitted public documents saying the science shows Seattle’s hydroelectric dams on the Skagit River kill salmon by blocking off miles of habitat where the fish could spawn and grow. Unlike most every other hydroelectric project in the region, Seattle’s dams do not include fish passage – technology to help salmon get around the dams.

In nearly three years of negotiating the terms and conditions of the dams’ relicensing, Seattle City Light officials have not admitted that their dams impact salmonid species, three of which are on the endangered species list: Chinook salmon, steelhead, and bull trout (char).

As part of the relicensing, in February, City Light agreed to study the possibility of adding fish passage over all three dams, but there is no commitment to do so.

The Sauk-Suiattle Tribe said Chief Seattle would never accept salmon getting blocked from accessing their habitat. He famously believed the lands and wildlife of the Northwest are sacred, holy and should be treated like a family member.

“Chief Seattle was for all of nature. He treated animals, treated fish, treated trees just like people,” said Jack Fiander, attorney for the Sauk-Suiattle Tribe. “Chief Seattle would have never tolerated not having fish passage because he felt like fish are people too. (The letter) sent a message that (Seattle leadership) is being hypocritical.”

Instead of hearing back from any of the elected officials, Chairman Maltos received a letter from Debra Smith, the general manager and CEO of Seattle City Light.

“The City of Seattle recognizes that the Skagit River is home to the Sauk-Suiattle and within your traditional territory (as well as other Tribes and Canadian First Nations). With this in mind, Seattle deeply respects the unique interests and perspectives that the Tribe brings to the (federal) relicensing of the Skagit Project,” Smith wrote.

Smith said City Light is going above and beyond what is required of the utility in the relicensing process, including implementing 33 studies to assess the impacts the hydroelectric project has on the watershed and ecosystem.

“The results of these studies will inform the decisions about whether, when and how fish passage will be required as a condition of the next license. The decisions about fish passage will be made based upon ecosystem needs and the best available science. We are committed to following the science. We are committed to following the fish. We are also committed to collaborating with our partners on this important and complex issue,” Smith wrote in the letter.

Chairman Maltos said getting no response from any of the elected leaders is insulting.

“It definitely didn’t sit right with us that we can’t even get a second of the mayor’s time. A phone call, an email, a letter, anything,” Maltos said. “In our eyes, we are the highest level of government to our tribe and our people and to not get the same respect. It’s unjust to us.”

City supports tribes in other states

The Tribe says the lack of response is especially disrespectful given the city’s longstanding support of tribes in other states.

This year, the Seattle City Council approved a joint statement to support the Midwestern-based Chippewa and Ojibwe Tribes' efforts to halt the construction of the Line 3 Pipeline.

In 2000, the Seattle City Council passed Resolution 30230 that supported the partial removal of the lower Snake River dams. The city's action was, in part, to stand alongside tribes that would benefit from the restoration of endangered and threatened salmon runs on the Snake River. The tribes include the Yakama Nation, the Confederated Tribes of the Umatilla Indian Reservation, and the Nez Perce Tribe of north-central Idaho.

In 2017, the Seattle City Council approved a resolution affirming the opposition to the Keystone XL Pipeline in support of the Standing Rock Sioux Indian Tribe of North and South Dakota.

Also in 2017, Seattle became the first major city to cut financial ties with Wells Fargo over the Dakota Access Pipeline. The city council voted to divest $3 billion from the bank in an effort to support the tribe.

In 2016, Seattle’s then-Mayor Ed Murray and members of the City Council signed a resolution in support of the Standing Rock Sioux. The resolution opposed construction of the pipeline, which the tribe said threatened their treaty rights.

“…indigenous peoples like the Standing Rock Sioux Tribe possess the right to maintain and protect their culture, religion, practices and relationship with their ‘traditionally owned or otherwise occupied and used land, territories (and) waters,” wrote city officials in the resolution.

According to leadership of the Sauk-Suiattle, that’s exactly what’s happening in the Skagit Valley – the dams threaten their treaty rights to fish in “usual and accustomed grounds and stations,” as guaranteed in the 1855 Treaty of Point Elliott, which was signed by Chief Seattle.

“When it’s easy, when it’s not in your backyard Seattle, you will support the Standing Rock people, you will call for the removal of Snake River dams,” attorney Fiander said. “But you have three dams in our territory that don’t have fish passage, while these fish are going extinct.”

Chairman Maltos and Fiander both said they’re appealing to City Light’s customers - the residents and businesses of Seattle – for support.

“The Sauk-Suiattle Tribe has very few resources. We’re out here in the North Cascades, we’re still in COVID, we have no casino. To the citizens of the city of Seattle who are interested in preserving salmon, don’t leave us out here to fight this alone,” Fiander said.

Neither the mayor nor members of the city council agreed to be interviewed for this report.