The Washington Employment Security Department website and hotline was back online on Sunday, but many people had difficulty getting through. 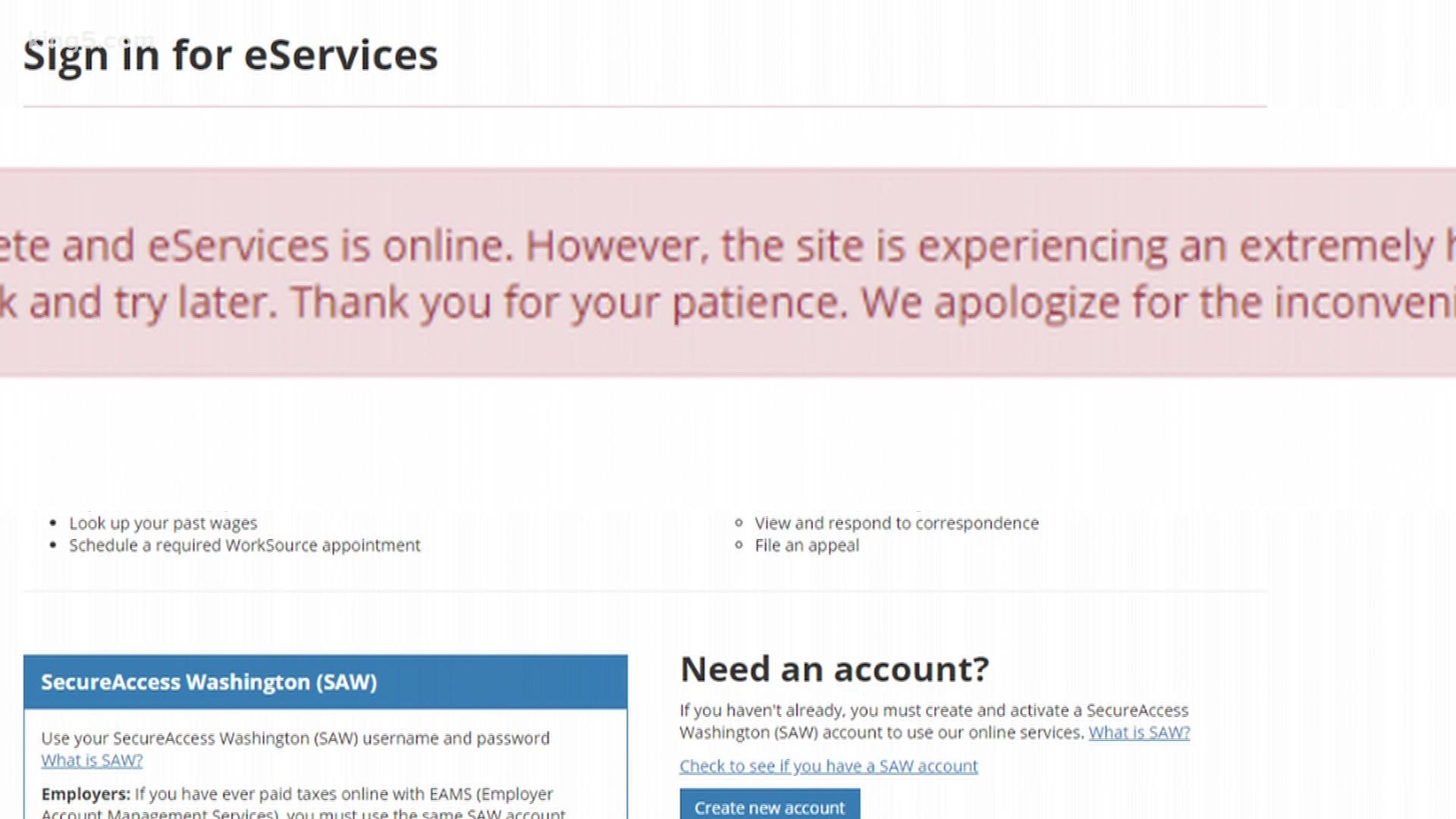 A record number of people applied for unemployment benefits Sunday, according to the state's Employment Security Department.

The one-day total topped the single-day record and eclipsed the week-long records set earlier this spring.

But the state's employment insurance chief acknowledged there were problems with the website, which was updated Saturday.

"We know it was not a great experience for a lot of people," said Employment Security Department Commissioner Suzi LeVine.

She said the number of new applicants overwhelmed the system, preventing many from being able to apply.

"Think about it like your front door to your house and all of a sudden the Seahawks front line comes in," said LeVine, "This was like the whole team coming in at once."

She encouraged the unemployed to be patient.

"People should keep trying," said LeVine, "The money will be there for them."

On April 18, the Employment Security Department launched a massive update of its computer systems to allow for the expansion of unemployment benefits enabled by the Federal CARES Act.

Shutting down the services on Saturday allowed the state to expand benefits to include federal assistance for thousands previously denied benefits, like the self-employed, said Employment Security Department Commissioner Suzi LeVine.

Tens of thousands of people have already filed successfully, and thousands continue to do so every hour, according to the department. However, due to this demand, the sign-up and online application systems have experienced performance issues – the department said they're seeing up to 500,000 per hour.

The Employment Security Department issued the following tips for those trying to file:

If customers are having difficulty applying or filing weekly claims, here are a few things to remember:

Weekly payments for unemployment will be going up to $600 and benefits are being extended for longer periods.

By the end of next week, LeVine said the number of people helping applicants is expected to double, making it easier for the unemployed to talk to someone on the phone about their claims.

LeVine said those who qualify for benefits will get paid retroactively, dating back to the first day they were out of work.

Unemployment numbers skyrocketed locally and nationwide as the coronavirus pandemic has crippled the economy since mid-March.

The expansion of benefits is a result of the federal CARES act, which put an emergency $2 trillion into the nation's coronavirus response.

Noelle Miller, a customer service agent working from home, said those trying to call in, especially after the services expand, should be patient.

“We know how bad it is. We know how many people are trying to get in,” Miller said. “Things are going to get much better in the next few weeks.”

While Miller said most of the callers have been relieved to reach someone, LeVine said the department has received threats from frustrated people.

“We're doing our best to try to help people,” LeVine said. “We are your friends and your neighbors. And we would ask for your patience and your grace to understand the work that we're going through.”

RELATED: More than 500,000 unemployed in Washington state last week, and that number could grow