A 20-mile stretch of SR 20 is fully closed so crews can respond to several wildfires in the area. 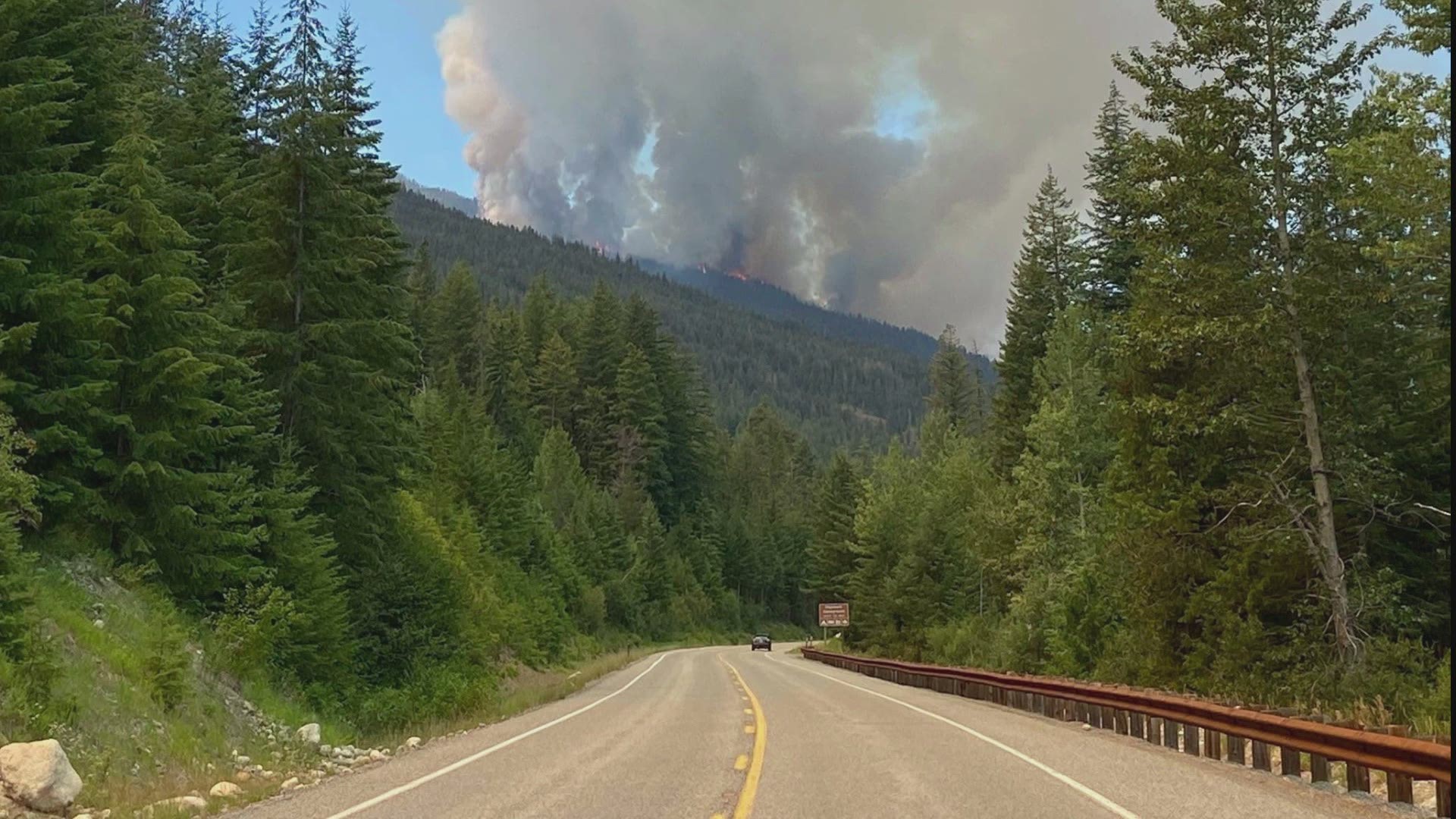 OKANOGAN COUNTY, Wash. — A closure of State Route 20, also known as the North Cascades Highway, was extended again Tuesday due to wildfire activity. A section of the highway originally closed July 12 due to wildfires burning in the area.

The Washington State Department of Transportation (WSDOT) said SR 20 is closed between milepost 165 and milepost 185, which is about 8 miles west of Winthrop.

There is no estimated time for when the roadway will reopen. WSDOT said drivers should plan to use US 2 or I-90.

Emergency responders will be at the closure points, and WSDOT is asking drivers not to attempt to go around the closures. WSDOT said there are no local roads or services east of Marblemount.

"We still have unprepared drivers trying to get past the closure- you will not be allowed through!" WSDOT tweeted Friday.

Multiple fires are burning in steep, rocky terrain near SR 20 and Mazama, Washington.

Winds pushed the Cedar Creek and Varden fires together last week. The flames have stayed to the south and west of SR 20, according to the U.S. Forest Service. The merged fire, which is now being called the Cedar Creek Fire, burned at least 8,443 acres as of Tuesday morning, according to InciWeb. Around 351 personnel are battle the fire and it is about 11% contained.

The Delancy Fire is located about four miles west of Mazama and has burned an estimated 154 acres as of Tuesday. The U.S. Forest Service said the fire is burning “in steep, rocky, sparsely vegetated terrain” and is being monitored by aircraft. The U.S. Forest Service said the Cedar Creek and Delancy fires were caused by lightning from a storm that came through central Washington on July 8.

A third fire, called the Cub Creek 2 Fire, is also burning near SR 20. The fire is located about five miles north of Winthrop and had burned more than 32,400 acres as of Tuesday morning. The Cub Creek 2 Fire started on July 16 at a hairpin turn of Cub Creek Road and the Chewuch River and has closed several roads in the area, according to InciWeb.

Click here for an interactive evacuation area map for the fires burning near SR 20.

Fire activity has increased adjacent to SR 20 and the closure points have been expanded to between milepost 165 and 182. There is no estimated time to reopen. #VardenFire2021 #CedarFire2021 #DelancyFire2021 pic.twitter.com/qw5hYiCfYR

A drought emergency means that the state's water supply is projected to be below 75% of the average. The shortage of water has had a direct impact on the state's farmers and wildlife.

“Farmers’ crops are failing, and ranchers are losing livestock because of these dry conditions, extreme heat, and lack of water,” Inslee said.

“We’re experiencing more droughts in our state as the climate warms. These dry conditions, combined with scorching heat, are putting our way of life at risk. We must continue to act on climate change to protect our state," he added.

Inslee also declared a state of emergency earlier this month that includes a ban on most outdoor and agricultural burning through Sept. 30.

"We must be vigilant in our efforts to prevent wildfires, and the loss of life and destruction of land and property that comes with them,” Inslee said. “We don’t want a repeat of recent years with dangerous wildfires across the state that have destroyed towns, killed livestock and resulted in weeks of unhealthy air quality. I urge everyone to do their part to help protect our beautiful state and all our communities.”

The state of emergency includes some burn ban exceptions, such as gas-fueled stoves in some circumstances and small campfires in contained structures on private property. Though the order does not supersede more restrictive provisions by local governments.