Crews are monitoring Puget Sound streams to see how all of the salt used to clear snowy roads will affect salmon. Salt can kill young fish as well as the insects they depend on for food. 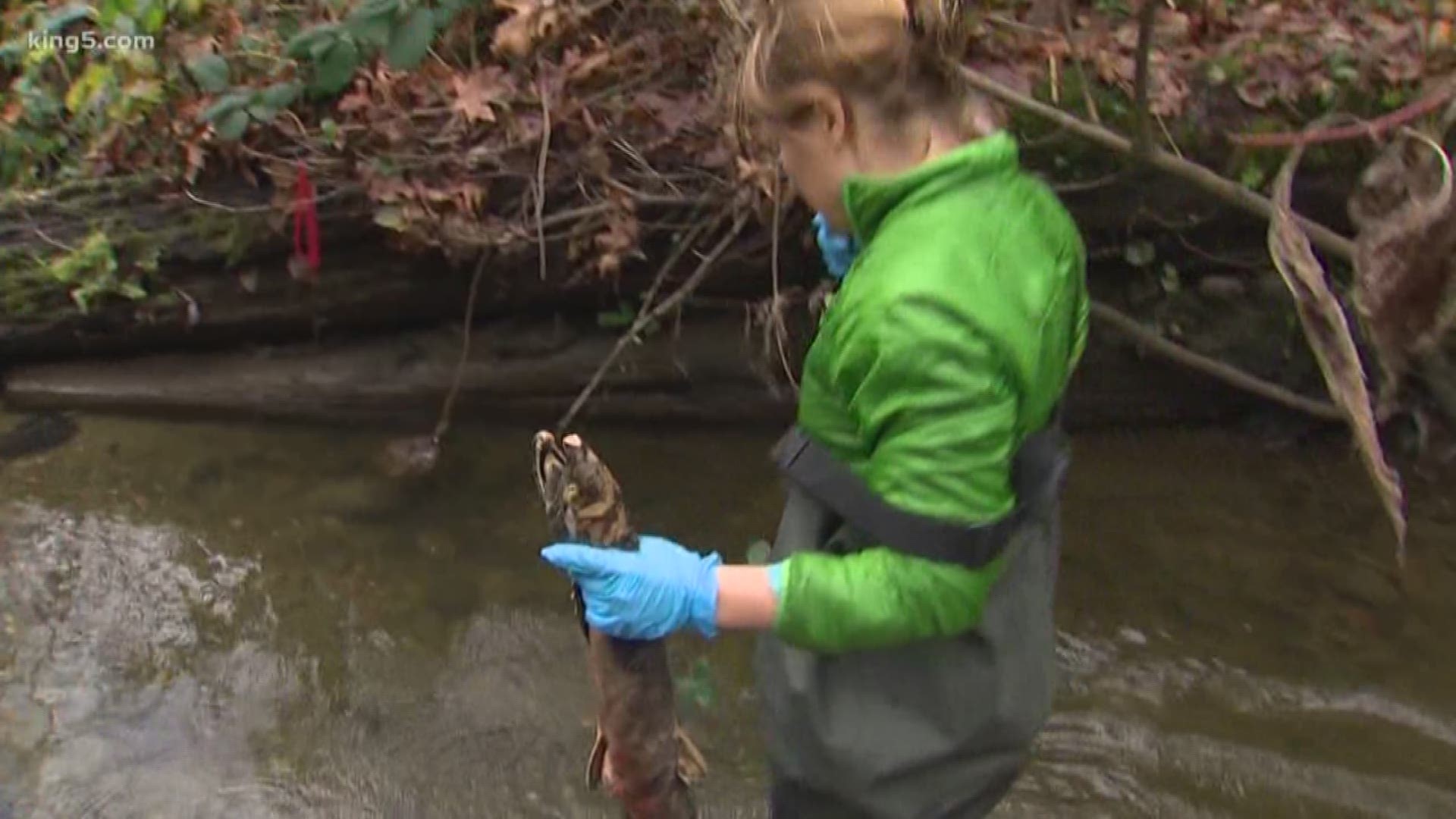 Longfellow Creek in West Seattle can turn so toxic from stormwater run-off that coho salmon are often found dead. The chemical combination causes them to suffocate.

"It kills the fish," said Puget Soundkeeper Alliance Executive Director Chris Wilke. "They can die within hours from exposure to urban runoff. Coho salmon are acutely sensitive, and they are timed from right when that first flash happens."

Crews with Seattle Public Utilities, the Seattle Department of Transportation, and many other groups are monitoring streams to track salt content and see how fish are faring.

"It's not the worst thing out there, but it is toxic. Especially to some life stages of the fish," said Wilke. "Most eggs are essentially hatching right now through the spring and those juvenile salmon that are coming out of the gravel, they need clean water, and they need to find food."

Road salt has been shown to kill smaller insects that fish feed on as well as kill the younger fish.

"Salt in particular along with everything else in the stormwater can be acutely sensitive to the very youngest juvenile salmon when they still have their yolk sac attached. If they don't make it through that stage, they will never get to be adults. So these late season snows might actually be a lot worse than early-season snow because we have more of the young fish around," Wilke said. "If you have to use it, use it very judiciously. Use it where you need to. Realize that you are having an impact."

"Seattle Department of Transportation (SDOT) works closely with Seattle Public Utilities (SPU) to develop and implement de-icer best practices that reduce environmental impacts. These best practices focus on what type, when, and how much de-icer is applied.  SDOT has been using salt since 2009 as a way of keeping people and goods moving while reducing environmental impacts compared to the previous strategy of treating the roads with sand. Using sand can damage the stormwater system and impact fish-bearing creeks.  When weather conditions allow it, another way SDOT reduces how much salt is needed is by proactively pre-treating the roadways with enhanced salt brine (Magnesium Chloride) before snow and ice accumulate. This prevents snow and ice from bonding to the pavement and allows for easier removal. This is a more effective practice than using salt by itself, increases public safety, and reduces environmental impacts compared to other treatment methods like sand. Finally, SDOT manages the salt supply to minimize runoff by keeping salt in covered areas and managing runoff within salt storage areas."