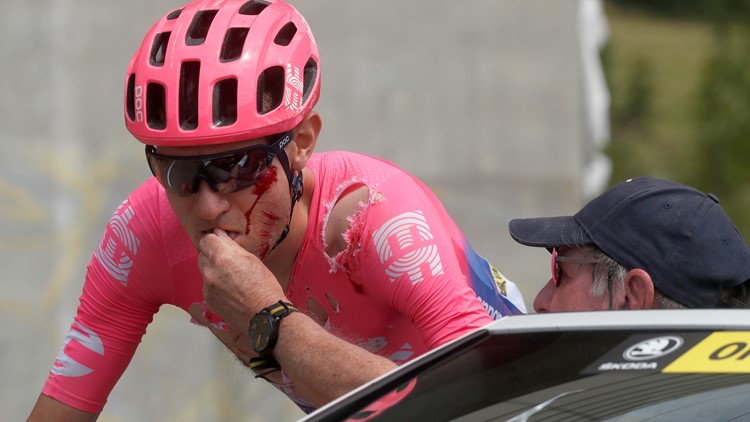 Photo by: AP
Tejay Van Garderen of the U.S. is treated by a medic after he crashed during the seventh stage of the Tour de France cycling race over 230 kilometers (142,9 miles) with start in Belfort and finish in Chalon sur Saone, France, Friday, July 12, 2019. (AP Photo/Thibault Camus)

COLONGE, France (AP) — Tacoma native Tejay van Garderen has pulled out of the Tour de France after breaking his left hand in a crash during the seventh stage on Friday.

Van Garderen hit a road divider and fell on his head and face seven kilometers into the 230-kilometer trek to Chalon-sur-Saone in eastern-central France.

The ED Education First team leader was attended by teammates and the race doctor. He got back on his bike, his face bloodied and his jersey ripped, to reach the finish of the Tour's longest stage.

He underwent X-rays after the stage, which confirmed the broken hand.

"He was placed in a splint and will not start stage eight," team doctor Kevin Sprouse said.

After finishing runner-up at the Criterium du Dauphine, a traditional warmup race for the Tour, the 30-year-old van Garderen high expectations at the Tour, where he finished fifth twice during his years with the BMC team.

"The crash was a result of a personal error," van Garderen added in a statement released by his team. "I was looking down at my bike because I saw something caught up in it, like a piece of paper, so I was looking down and I hit a median. I have no one to blame but myself, and I really hope that no one else got hurt because of me."

The Top American rider in the race, van Garderen was 36th overall, 10 minutes and 26 seconds behind race leader Giulio Ciccone.

"We will miss having him in the team," EF Education First manager Jonathan Vaughters said. "He has showed great form coming into the race. We wish him a speedy recovery and hope that he'll be back racing again soon."