The win means the Patriots now tie the Pittsburgh Steelers with a record of six Super Bowl victories. 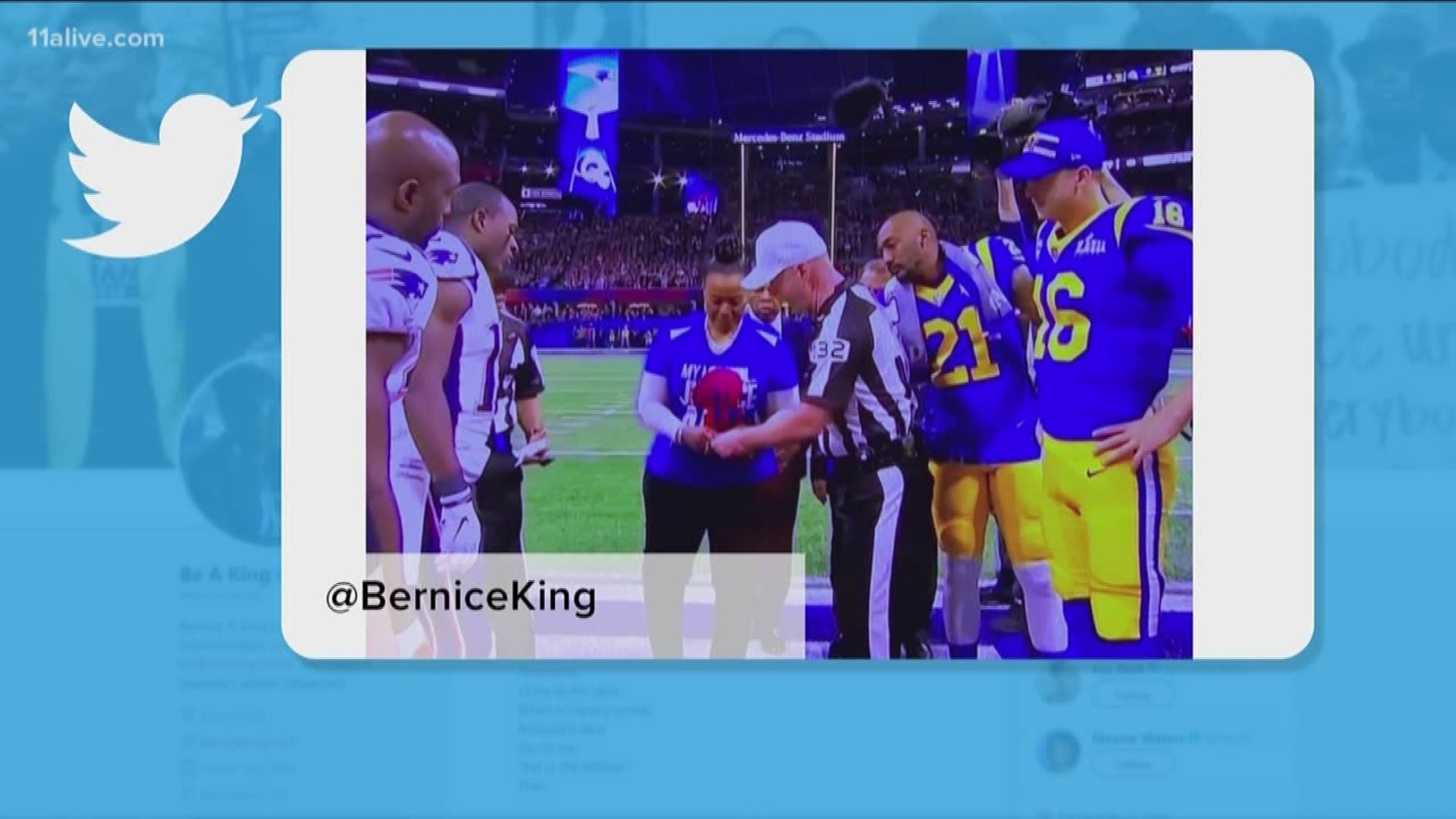 ATLANTA — Defenses dominated what was supposed to be a super shootout, until Tom Brady led one classic drive to win the New England Patriots their record-tying sixth Super Bowl.

Brady threw two perfect passes to Rob Gronkowski to set up rookie Sony Michel's 2-yard score — the only touchdown in the lowest-scoring Super Bowl ever. That put New England up 10-3. A late field goal clinched the game 13-3.

"Finally got a touchdown and the defense played the best game of the year," Brady said

No Super Bowl had gone into the fourth quarter without a touchdown. This one did, tied 3-3 — even though these teams combined to average over 60 points a game.

When the Patriots needed a score, Brady, the oldest winning quarterback in a Super Bowl at 41, completed four straight passes, including a pair covering 47 yards to Gronkowski. The second , on which the star tight end beat two defenders, ended at the Los Angeles 2, the only time either team was inside the 20-yard line. Michel ran off left tackle for his sixth postseason touchdown.

"He knows to trust in me and throw that ball," Gronkowski said, "and I'm going to grab it."

Julian Edelman, the outstanding receiver who missed the 2017 season with a knee injury, was the game's MVP with 10 receptions for 141 yards.

With 4:17 left, All-Pro Stephon Gilmore picked off an ill-advised pass by Rams quarterback Jared Goff, who seemed overwhelmed by the big stage all night, at the New England 2.

Stephen Gostkowski made a 41-yard field goal with 1:12 remaining, completing a 72-yard march that took more than three minutes off the clock and included 26-yard runs by Michel and Rex Burkhead.

It was a workmanlike conclusion for the Patriots (14-5), whose losses all came away from New England. They beat the top two offenses in the Chiefs and Rams (15-4) in the postseason, and tied Pittsburgh for most Super Bowl titles.

The Patriots were terrific all game on defense, allowing the fewest points in a Super Bowl (tied with Dallas in 1972 against Miami).

"We're a relentless team," linebacker Dont'a Hightower said. "We didn't give up. A lot was thrown at us. When we play like we did tonight, we can't be beat."

The Rams, who reached the NFL championship game with the aid of a major officiating error in the conference title victory at New Orleans, never really threatened to reach the end zone.

At 66, Bill Belichick became the oldest winning Super Bowl coach. The Patriots beat the Rams, then representing St. Louis, to begin their dynastic run in the 2002 game. They also have beaten Carolina and Philadelphia (2004 and '05, the last repeater); the Seahawks in 2015; and the Falcons in 2017 in the only overtime in Super Bowl history.

They have lost three times, including to Philadelphia a year ago. New England is the first team since the 1972 Dolphins to win a Super Bowl the year after losing one.

How the Patriots accomplished it was atypical. The 10-point margin was their biggest in winning a championship.

Brady, who has won four Super Bowl MVP trophies, wasn't particularly sharp — except when throwing to Julian Edelman, the game's MVP. Edelman, who was injured and didn't play the 2017 season, was the steadiest offensive player on the field, finishing with 10 catches for 141 yards.

All those suspicions about the Patriots declining this season became moot as the defense made the 24-year-old Goff look awful and turned All-Pro running back Todd Gurley into a nonfactor.

While it was anything but odd to see New England celebrate a championship, the manner it earned this one was startling. The 2 1/2-point favorite Patriots moved the ball well, ran down the clock, but made uncharacteristic gaffes on offense. Goff and the Rams made more.

LA's second-ranked offense managed just 57 total yards for the half. The Rams were completely overmatched on the line and were particularly unable to handle the elusive Edelman, who had seven receptions for 93 yards.

Coach Sean McVay, whose Rams never had been blanked in a first half, let out a long, deep sigh just before halftime, recognizing how badly his team was manhandled, even though it trailed just 3-0.

It was the lowest score at halftime since Super Bowl 9, which Pittsburgh led 2-0 over Minnesota.

McVay, the youngest Super Bowl head coach at 34, had no answers as Gurley, coming off knee issues, managed 35 yards rushing, Goff went 19 for 38 for 229 yards and was sacked four times. Brandin Cooks, a Patriots receiver last season, did have eight receptions for 120 yards.

Gostkowski's 46-yard miss wide left in the first quarter was the first unsuccessful field goal in the Mercedes-Benz Stadium, home of the Falcons, by an NFL player all season. The 13-year veteran also missed a field goal and extra point in the 2018 Super Bowl loss to Philadelphia.

But he gave the Patriots a 3-0 lead with a 42-yarder in the second quarter.

The Rams' Johnny Hekker had a 65-yard punt in the third quarter, the longest in a Super Bowl. It was his eighth punt of the game — with 1 1-2 periods remaining — the most for LA in McVay's two seasons in charge.

Greg Zuerlein tied it with 2:11 left in the third quarter on the first drive on which Los Angeles gained more than one first down. His 53-yarder was the second-longest field goal in a Super Bowl.

McVay deferred after winning the coin toss. In their previous two playoff games, the Patriots marched right downfield to a touchdown with the opening kickoff, setting an immediate tone. This time, after Cordarrelle Patterson's 38-yard kickoff return and four successful runs, Brady's first pass was tipped by receiver Chris Hogan and cornerback Nickell Robey-Coleman. Linebacker Cory Littleton made a diving interception; it was the first time Brady was picked on his initial throw in a postseason game.

New England lost safety Patrick Chung on the third play of the second half when his right forearm was caught between Gurley's shoulder pad and the helmet of teammate Jonathan Jones. Chung writhed in pain before walking off with an air cast on.