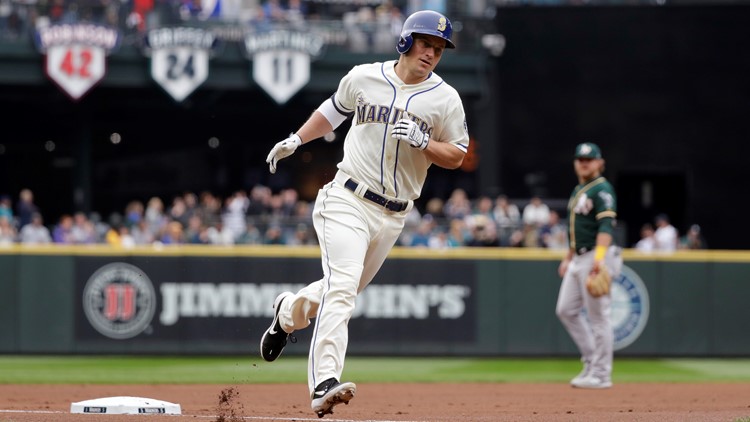 Photo by: AP
Seattle Mariners' Kyle Seager rounds the bases on his two-run home run against the Oakland Athletics in the first inning of a baseball game Sunday, Sept. 29, 2019, in Seattle. (AP Photo/Elaine Thompson)

SEATTLE (AP) — Tanner Roark seemed to describe perfectly the approach of the playoff-bound Oakland Athletics on the final day of the regular season.

"I don't know. It was a 12 o'clock game, last game of the season, we've already clinched a wild-card spot, so I'm sure you guys can imagine where our minds are at," Roark said.

With their attention already on the AL wild-card game, the A's dropped the regular season finale in a 3-1 loss to the Seattle Mariners on Sunday. Kyle Seager hit a two-run homer in the first inning, promising prospect Kyle Lewis added an RBI single and the Mariners headed into the offseason with a victory.

Meanwhile, Oakland finished 97-65 for the second straight year and rested most of its regular starters ahead of Wednesday night's AL wild-card game at home against Tampa Bay. The A's lost the wild-card game last year at the New York Yankees.

"Same record, different way of doing it," Oakland manager Bob Melvin said. "For the most part it's the same group, but again at the trade deadline we bring in some guys that are really impactful for us, some younger guys came up and are right now and will continue to be with this team for a long time. We did it a little bit differently on the pitching end. The offense was pretty consistent. We hit some home runs and we played great defense. So all that adds up to 97 wins."

Seager missed the first two months of the season with a hand injury and struggled when he returned in late May. But the former All-Star rebounded to finish the year with 23 home runs and 63 RBIs. Seager's homer off Roark (4-3) was his first since Sept. 10.

It was a challenging season for Seager, who ended up being one of the few vets surrounded by a lot of inexperienced youth.

"Going on the DL for the first time wasn't ideal, wasn't great, didn't love it, obviously," Seager said. "It was a different experience for me to sit back and watch for a little bit. It gets the juices flowing, it gets you hungry again and something you could spin into a positive."

Lewis, who shined during his late-season call-up hitting six home runs in his first 10 games, lined a two-out single in the fifth after Austin Nola had doubled.

The A's had just three hits as Seattle used a variety of young arms to close out the season. Justin Dunn was impressive in his two innings and Reggie McClain (1-1) got the victory, including a key groundout from Stephen Piscotty with runners on second and third to end the third inning.

The Mariners got a key defensive play on J.P. Crawford's leaping catch on Robbie Grossman's line drive to end the fifth inning and save a run.

Anthony Bass pitched the ninth for his fifth save.

Dunn was used mostly in short stints as a starter in his four outings for the Mariners, but the last three showed great promise. Dunn threw six scoreless innings allowing two hits and striking out five over his final three outings against Pittsburgh, Houston and Oakland.

"Part of the reason I wanted to get up here was to get my feet wet and go into the offseason knowing I belong here. I feel like I did that my last two times out and hang my hat on that," Dunn said.

Oakland SS Marcus Semien made only a brief appearance on the final day but managed to play in all 162 games this season. Semien led off the game with a pop out before being lifted.

Semien finished the regular season hitting .285 with 33 home runs and 92 RBIs. He appeared in 159 games twice previously in his career.

"I've had a lot of fun with this in the last day. Give him 161 and cut him off but that's not going to happen. So we'll get him an at-bat today. He deserves it," A's manager Bob Melvin said.

Melvin said he doesn't intend to announce a starter for the wild-card game until Tuesday's workout day.

In part because of their rebuild, the Mariners saw a significant drop in attendance. Seattle drew 16,851 for the finale and finished the year unofficially at 1,791,895 fans for its 81 home games. A year ago, the Mariners drew 2,300,177.

Seattle OF Mitch Haniger hopes to resume his normal offseason workouts in the next couple of weeks. Haniger has not played since early June after suffering a ruptured testicle. He suffered a back injury during his rehab and it was the back problem that ultimately caused him to miss the rest of the season. Haniger said he doesn't anticipate any restrictions when spring training begins.

Athletics: Will host Tampa Bay in the AL wild-card game on Wednesday.

Mariners: Will open the 2020 season on March 26 hosting Texas.