Stephen Hawking left a special message for a Portland student

A Portland special education teacher shared his memories of the late Stephen Hawking. 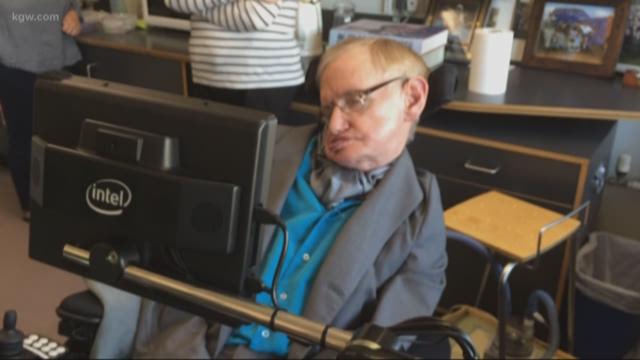 On the KGW News app? Tap for multimedia article

Brett Bigham, who was named Oregon Teacher of the Year in 2014, works with students who need talking devices to communicate. He uses Hawking as an example in his classes.

Bigham tells students, “Look at Stephen Hawking, if he didn’t use his talker, no one would know he’s the smartest man in the world."

Hawking, the celebrity physicist and writer, died Wednesday at his Cambridge, England home.

Bigham once wrote a letter to Hawking thanking him for being a hero to the students. To his surprise, Hawking wrote back.

“I couldn't believe it. I'm a special education teacher, most often in the basement of a building somewhere and here Stephen Hawking was answering my letter,” said Bigham.

Bigham got to meet Hawking at his office in Cambridge. He was only hoping for a few minutes of his time, but ended up spending two hours talking with the physicist, and he got to break some amazing news to him.

“I said to him, 'This is a really important day for you,' and he asked me why, and I said, 'Your black hole theory was proven,' and he said, ‘What!?’”

Bigham had read in the newspaper that morning about an Israeli scientist who may have proved Hawking’s theory that black holes are slowly shrinking.

Bigham then talked with Hawking about one of his Portland students who was struggling to use her new talking device.

The student couldn’t speak or move very much. Her connection to the world was based on watching what was around her. When she got her talking device, it went right in front of her face, blocking her view of the world.

“She had to decide: 'Do I get to see what’s going on or do I get to speak?'" Bigham said. "It was a very difficult choice for her.”

Bigham got Hawking to make a short video encouraging her to use the talker.

The message, “Joanne, keep using your talking machine,” took a lot of time and effort on Hawking’s part. He could only move a few facial muscles, and had to twitch his cheek to scroll through the alphabet and type each letter.

Bigham calls Hawking his hero.“To lose him is to lose the example that there are people whose bodies have trapped a genius mind maybe, or maybe just an everyday mind. But there’s a mind in every body,” said Bigham.

Bigham is headed to Bangladesh to train teachers who will be working in the country’s first schools to accept special needs students.

You can learn more about his efforts on his GoFundMe page. Bigham is also planning to auction off a thumbprint signed copy of one of Hawking’s books to raise money to buy students new talking devices.

Bigham was fired by the Multnomah Education Service District in April 2015, which he contested before eventually reaching a settlement over the dismissal.