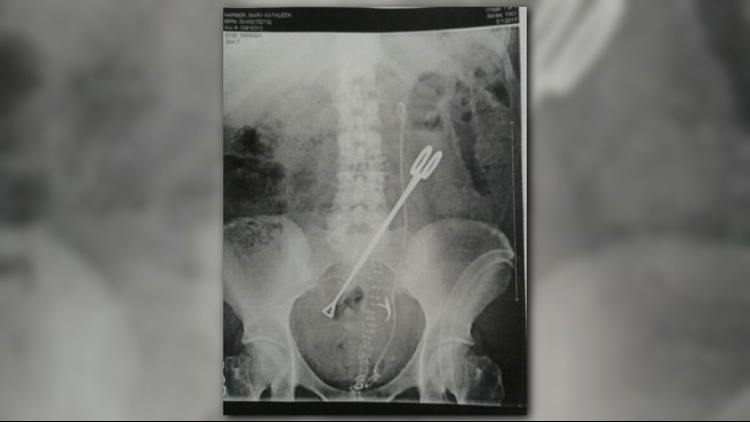 This photo of an X-ray image of a pair of forceps was included as 'Exhibit A' in a lawsuit filed by a woman who claims an 8-inch pair of forceps were left in her during surgery at Shasta Regional Medical Center.

A California woman is suing Shasta Regional Medical Center and a Redding doctor for medical negligence because she says an 8-inch long surgical instrument was left inside her during surgery.

The lawsuit says Mary Harber had 18 inches of her small intestine removed after “it looped through the handle of an 8-inch surgical forceps” left in Harber's abdomen after an exploratory laparotomy.

Harber, 52, of Susanville went to the hospital to have a benign tumor removed from her abdomen last spring, according to her lawyer, Michelle Jenni.

She was discharged from Shasta Regional on April 19, 2017. But she was having severe pain in her back, kidney and abdomen and on May 1 went to the emergency room at Banner Lassen Medical Center in Susanville, Jenni said.

During that visit to the ER doctors discovered the forceps inside her, Jenni said.

Harber is recovering from the surgeries, Jenni said.

“As of right now she seems to be doing fine,” she said.

The suit, filed in Shasta County Superior Court, does not specify a dollar amount in damages. It does say, though, that Harber will require further medical care.

The suit asks for medical and incidental expenses and loss of earnings in the past and future. It also asks for damages from the loss of comfort and support to her husband, Jacob Harber.

Neither Mooney nor Shasta Regional CEO Richard Fletcher could be reached for comment.

Jenni said Wednesday that she was in settlement negotiations with attorneys for the hospital and Mooney.

“It's not a huge proportion of medical malpractice claims, but it does happen,” she said.

Estimates on how often it happens varies widely. One study in the New England Journal of Medicine said that out of about 28.4 million inpatient surgeries performed annually in the United States, there were 1,500 cases where foreign objects are left after surgery.

The study attempted to find the cause of such incidents by looking at cases involving patients of hospitals and doctors in Massachusetts that had malpractice insurance through Controlled Risk Insurance Company.