The move did not necessarily come as a surprise-- reports on Wednesday indicated Trump planned to withdraw. 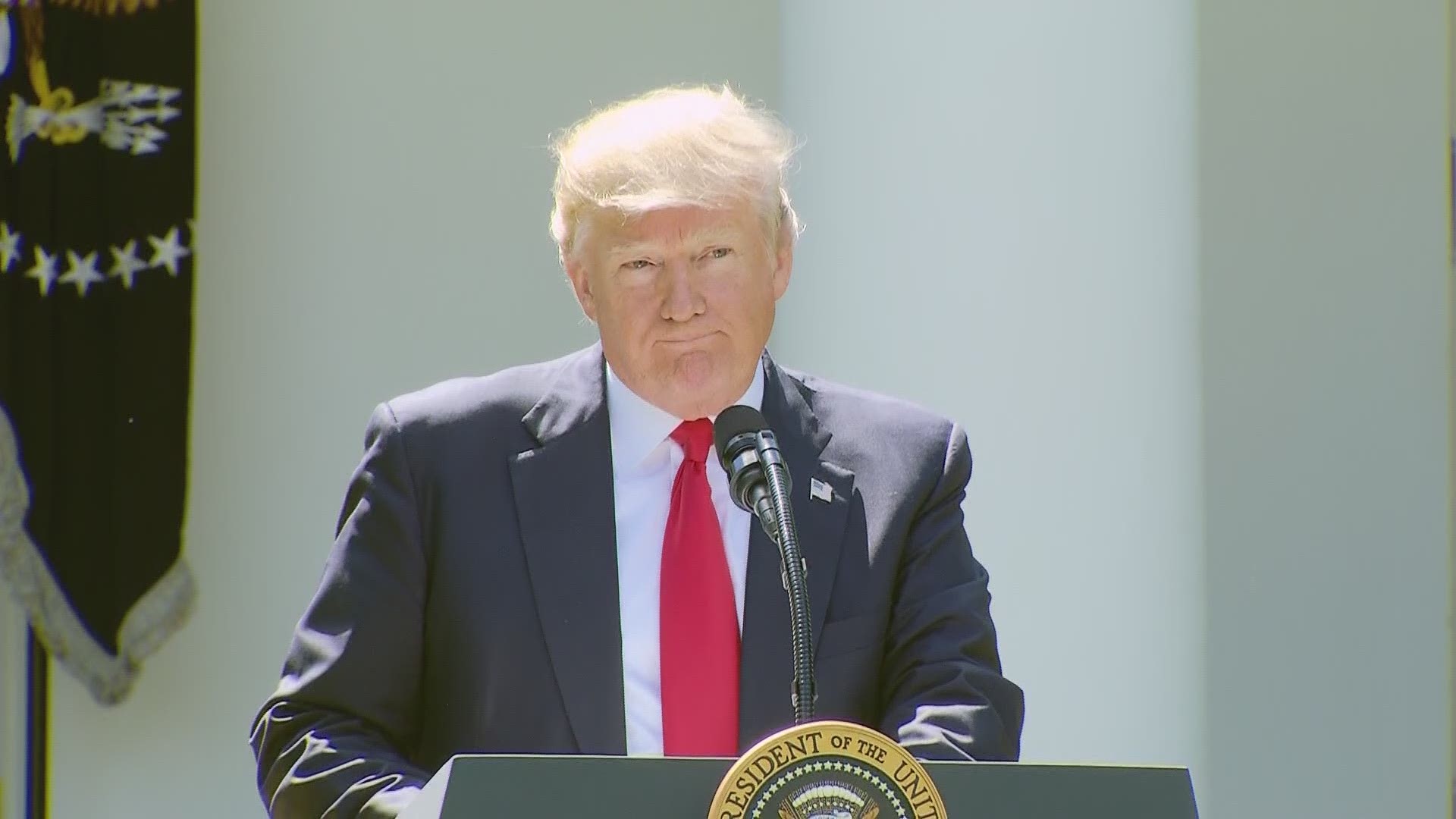 President Trump announced Thursday that he will pull the U.S. out of the Paris climate deal, despite concerns from top CEOs and international leaders.

Although Trump announced the withdrawal from the agreement, he is still open to negotiating an alternative climate deal.

"In order to fulfill my solemn duty to protect America and its citizens, the United States will withdraw from the Paris climate accord, but begin negotiations to re-enter – either the Paris accord or an entirely new transaction with terms that are fair to the United States, its businesses, its workers, its people, its taxpayers," Trump said.

"We will see if we can make a deal that's fair."

But that proposition led to a swift joint statement from France, Germany, and Italy who said the accord can't be renegotiated.

The decision also sparked a flurry of criticism from a number of world leaders, including Canadian Prime Minister Justin Trudeau and the Prime Minister of Denmark Lars Rasmussen.

The move did not necessarily come as a surprise-- reports on Wednesday indicated Trump intended to leave the agreement.

In his announcement, Trump said he feels a duty to represent Americans in pulling out of the agreement.

"I was elected to represent the voters of Pittsburgh, not Paris," he said.

Following that remark, Pittsburgh mayor Bill Peduto responded on Twitter, saying the city will continue to follow the guidelines of the climate agreement.

As the Mayor of Pittsburgh, I can assure you that we will follow the guidelines of the Paris Agreement for our people, our economy & future. https://t.co/3znXGTcd8C

In a joint statement, Governor Andrew Cumo, Governor Edmund Brown Jr., and Governor Jay Inslee announced the formation of the United States Climate Alliance. They described it as a coalition that will convene U.S. states committed to upholding the Paris Climate agreement.

Trump’s decision is considered a win for Republicans and pulls the U.S.-- the second-largest producer of carbon dioxide -- out of a nearly 200-nation agreement to cut greenhouse gas emissions.

Other lawmakers, including U.S. Senator Rand Paul, took to twitter to defend the move. Paul described the action as "great news for the economy" that "could save as many as 6 million U.S. jobs."

"The U.S. will continue to be a leader in energy technology, development & delivery," he wrote in a tweet.

I fully support @POTUS' decision on the #ParisAccord. The U.S. will continue to be a leader in energy technology, development, & delivery. pic.twitter.com/vtcc4eODJl

CEOs from Apple, Facebook, and Google all urged President Trump to support the pact before his decision. After the secession became official on Thursday, a number of business leaders issued statements condemning the move.

Staying true to his word, innovative powerhouse Elon Musk announced he would leave the president's council in response to the announcement.

Musk had threatened to do so prior to Trump's announcement.

Am departing presidential councils. Climate change is real. Leaving Paris is not good for America or the world.

As a matter of principle, I've resigned from the President's Council over the #ParisAgreement withdrawal.

Before Trump even finished his full address, President Obama issued a statement opposing the withdrawal.

Last fall, Obama hailed the agreement as a "turning point for our planet."

"The administration is joining a small handful of nations that reject the future," Obama said in the statement.

"I'm confident that our states, cities, and businesses will step up and do even more to lead the way, and help protect for future generations the one planet we've got."

Hillary Clinton also criticized the succession in a tweet on Thursday night.

A historic mistake. The world is moving forward together on climate change. Paris withdrawal leaves American workers & families behind.