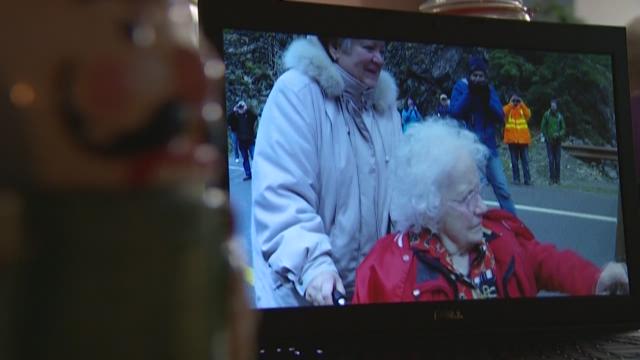 How does one begin to fit 95 years of sweet life into a two-inch column? That’s the question Tootsie Clark’s granddaughter, Jurene Brooks, is grappling with as she writes her obituary.

“Tootsie Clark, born Ethel Madrene Buller in 1922, passed peacefully at her home in Marblemount, Washington, on September 24th, 2017 at the young age of 95,” Brooks began her grandmother’s story.

Clark passed away in her sleep on Sunday morning.

“I could have a whole newspaper. Can we have a page? Because I can hardly fit everything I want to say in this little tiny column,” Brooks said.

Every year for decades, drivers lined up along the North Cascades Highway waiting for WSDOT workers to unlock the gates, signaling it was safe to cross. Since 1977, Tootsie was always the first one through.

“She’d get up at 4 a.m. to open the pass. It was pitch black out, and she’d get up and make coffee, cinnamon rolls, put everything, sugar, cream in the back of her trunk and it was the best tailgate ever,” Clark’s daughter Judi Brooks said.

1 / 5
Tootsie Clark was a familiar face who always brought cinammon rols for the annual reopening of the North Cascades Highway. (Photo: KING)

Clark’s granddaughter says at the beginning, bringing cinnamon rolls to the pass for drivers may have been a way to promote her restaurant or to convince WSDOT workers to remember to let her through. However, it quickly began a tradition. In 2006, WSDOT workers invited her to open the gate every year as well.

“She always wanted to be first,” Brooks said, explaining she would be trying to get to a vacation home and friends on the other side of the mountain range.

If Clark was not first, she would threaten to give people burned cinnamon rolls, her daughter joked. Only, there were never any burned ones.

“They were perfect,” Brooks said.

Clark was the youngest of six, according to Brooks, and was nicknamed Tootsie after a family friend called her “Toots,” after a character in the 1918 comic strip "Toots and Casper."

She would go on to convert her family lumber mill into cabins and run a restaurant called The Eatery. She blazed a trail as one of few female business owners at the time, according to Brooks.

Tootsie also married Rudy Clark and had two children: Judi and Don. To her family, “she was just amazing,” her daughter said.

“She made you feel like you’re the only person in her life,” Jurene Brooks said. “For me, not being able to call her when I drive home from work is the hardest part. She was my everything, my angel, my true north.”

Clark’s grandson Greg says the family does not know who will open in the pass in her place, but they do know she will be handing out her famous cinnamon rolls at a different gate.

“Now she’s greeting everyone up there,” Greg Brooks said, “playing pinochle. The party just started. It’s a joyous thing, and I know she’s dancing a jig with my grandpa Rudy.”

Clark’s celebration of life is taking place October 14 at 1 p.m. at the Marblemount Community Club.