Seattle police are under more scrutiny for how officers handled the crowd on Saturday. But SPD says a group determined to cause destruction also injured officers. 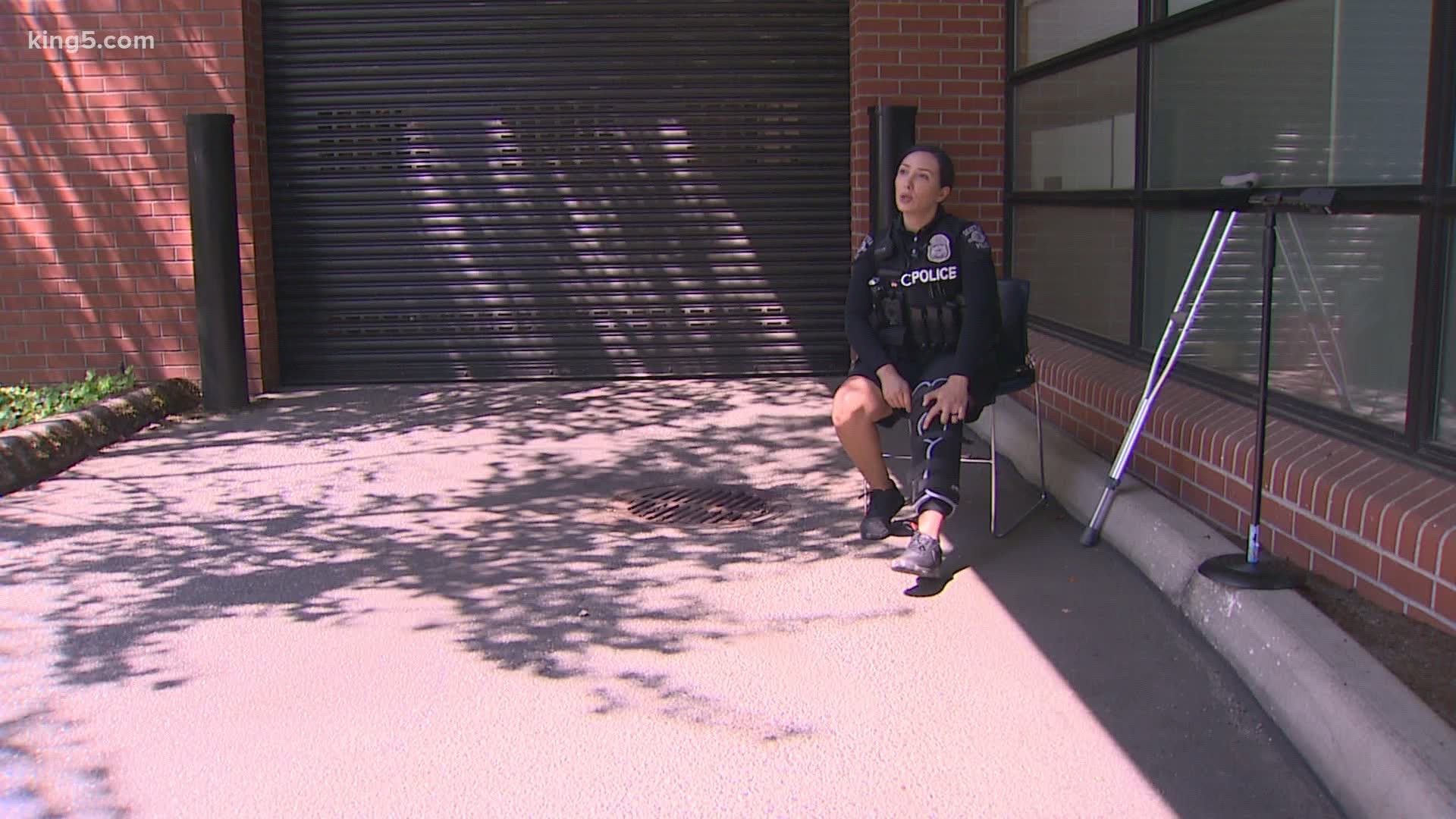 SEATTLE — Seattle Police Officer Elyssa Khalifé, who goes by Officer Ellie, has a leg in a brace and needs crutches after what happened during a violent clash outside of the department's East Precinct on Saturday.

Khalifé was one of the 59 members of the police department who said they were injured.

"Officers are saying, 'Look out,' and you look out and you see a giant rock coming straight for your head. As they (demonstrators) are doing this, they are saying there is no riot here, take off your riot gear," said Khalifé, who called the scene shocking.

Khalifé said the day started with instructions for officers to stand down unless people were getting harmed. She said a crowd of about 2,000 people started marching toward the East Precinct, then the building was hit.

"They threw a homemade explosive of some sort at the wall of the precinct and it made an 8-inch hole, and we could see through it. That's when we were like, OK, they have explosives. This is dangerous. We are in the building. We are the target," Khalifé said.

She went outside and was with other officers, telling the crowd to move back.

"It just felt like they were there to hurt us," she said.

Khalifé says she was hurt when a rock hit her leg.

"My meniscus is torn completely, so there is no option other than surgery," she said.

Khalifé grew up in Lebanon and is fluent in Arabic. She became a sworn officer a few years ago.

"I decided to do it and be a role model for my people, and also to do it so I could be there to answer the call and be on this side of it when my community calls for the police," she said.

Khalifé says she doesn't have a problem with peaceful protests.

"When it is really peaceful and people are not trying to assault us, I do have conversations," Khalifé said. "I've had a few encounters where they are super angry and they are saying mean things. And then after our conversation, they shook my hand and said, 'Thanks for having this conversation with me. I'm glad to know you are not a robot.' That’s why I try to talk to people because I’d like them to remember that we are human beings behind the badge."

Police are under more scrutiny for how officers handled the crowd, and used pepper spray on some demonstrators.

The Seattle Chapter of the National Lawyers Guild criticized the behavior of the police department.

"During the protests, Seattle Police Department officers engaged in the indiscriminate use of crowd control munitions against largely peaceful protestors," the organization said in a statement.

The group Black Lives Matter Seattle-King County also criticized the Seattle Police Department's actions on Saturday, taking to court to accuse SPD of violating a judge's order limiting the use of munitions like tear gas, blast balls, and pepper spray.

"Simply put, it is always wrong to attack protesters peacefully exercising their constitutional rights with potentially lethal force. It is always unconstitutional to fire indiscriminately into a crowd. But that's exactly what SPD did," lawyers for Black Lives Matter Seattle-King County wrote in the court filing.

Seattle police pushed back on the criticism, saying pepper spray was used only in cases of direct, targeted response to acts of violence.

Police Chief Carmen Best says that during the protest, crimes like arson, assault, and vandalism were committed on Saturday, and the department has launched an active and ongoing investigation.