In 1983, in the school janitor’s office, the long-time school employee Chuck Siddons raped a 10-year-old student. 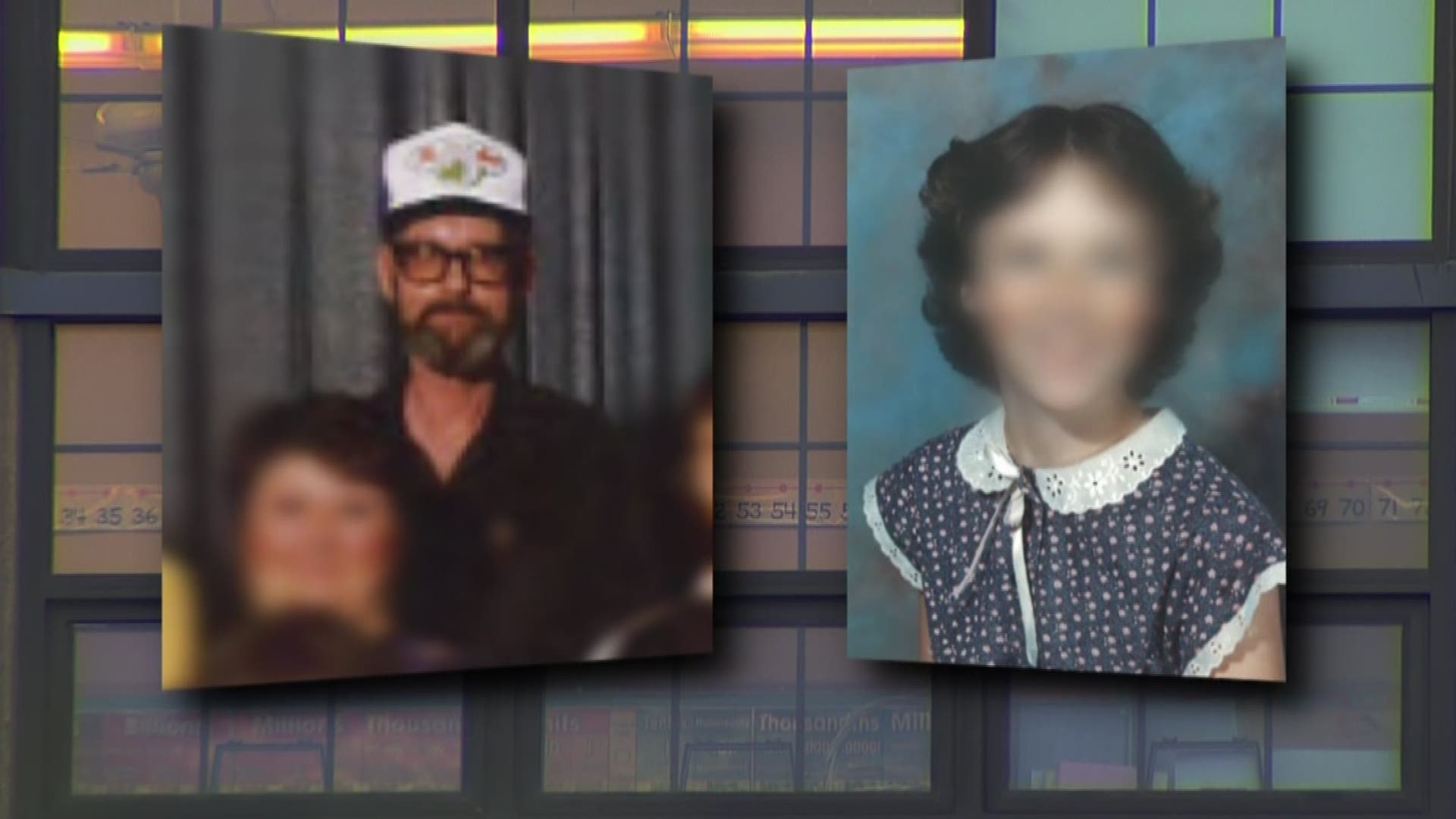 Two years ago at the age of 42, a woman who KING is identifying by the initials of A.W., took the step of sharing a secret she’d kept since the age of 10.

She decided it was time to tell her parents the truth about what really happened on the last day of third grade at St. John Catholic School in Seattle, and the trauma the event and aftermath had caused for so many years. In 1983, in the school janitor’s office, the long-time school employee didn’t just touch the little 10-year-old inappropriately. A.W. admitted that the janitor, Chuck Siddons, had raped her.

“As a child, after this I struggled. I began drinking and smoking. I struggled in high school. I had problems in high school, and my whole life I’ve carried a dark secret feeling guilty. You feel ashamed, you feel dirty,” said A.W.

After the assault, Siddons told the third grader to keep her mouth shut, but she didn’t. A.W. told her parents the man had put his hands on her private parts. They immediately called the police department. The janitor was arrested, fired from his job, pled guilty to indecent liberties and went to prison. According to A.W., the school appeared to move on.

“They didn’t notify parents to check on their children to make sure they were safe and they weren’t harmed as well," A.W. said. "So when he was dismissed, there was no explanation.”

Even though the janitor was gone, A.W. said she was traumatized attending fourth grade at St. John. She had to pass by the office where the rape occurred every day. No one from the school ever spoke to her about it or offered help, and her parents told her to keep quiet. The assault haunted her for three decades as she tried to process unanswered questions: Did the school or police ever investigate? Were there other victims? Was she the only one?

“There’s no doubt in my mind that I wasn’t his only victim from St. John," she said. "I believe I was his last one, because he was fired shortly thereafter, because my parents called the police instead of just calling the principal.”

After telling her parents the whole story two years ago, A.W. hired attorneys to try to find those answers. They launched an investigation and found that indeed, the janitor had a 10 year tenure at St. John filled with accusations, rumors, and eyewitness accounts of sexual abuse of young children. The attorneys also obtained sworn testimony from former school officials, teachers, parents, and students who said they had reported the janitor’s abuse to two different school principals over the years, yet nothing was ever done. Chuck Siddons, who one student testified was known as “Chester the Molester” at school, was allowed to stay on at the school, with unfettered access to children for an entire decade.

“Reports had been made to the principal by numerous people, and they were ignored,” said A.W. “I knew what happened to me should not have happened. It shouldn’t happen to any child. But had they done their job and reported it, I would not have been a victim of his.”

Legal documents show allegations of sexual misconduct by the janitor were brought to the attention of teachers and school leaders in the early 70’s. In 1972 it became Washington state law that adults in positions such as these were mandatory reporters. It was their legal duty to notify Child Protective Services.

Some of the testimony that’s come to light in the last two years includes a detailed accounting by a former school vice principal. She reported seeing Siddons molest a 9-year-old girl in the school cafeteria.

“I was on lunch duty, and I walked up and down and amongst the tables; and at one point, Chuck had his hands around (the child’s) back, and he was rubbing his hands back and forth across her breasts,” said the former vice principal in a deposition related to a lawsuit filed against the Archdiocese by A.W.

The former school official said she “quietly yelled at him and said I didn’t want him to ever do that again to anybody.” She also said she reported the incident right away to the principal, but that he didn’t appear to take any further action.

“I do not believe he did,” said the former vice principal.

A current St. John teacher said she alerted the principal in the mid-70’s that young girls were “concerned” about the janitor’s behavior. The teacher testified that she warned her female students to avoid Chuck Siddons.

“I would probably say to them, ‘Steer clear of Chuck. If you are uncomfortable with him, steer clear of him,’” said the teacher. Yet these concerns didn’t go anywhere beyond the school grounds.

A former P.E. teacher and St. John coach said Siddons was known to purposefully position himself underneath the school stairway in order to lurk at young girls.

“(My athletes told me) he would put up his chair by the door and look up the girls’ skirts as they went up the stairs,” said the former coach. “(The boys) said he was a pervert, and the boys didn’t like him even though he was apparently a pedophile with girls and not boys.”

These allegations were never reported to law enforcement.

A former student said Siddons repeatedly molested her beginning in the third grade and that she tried mightily to get people to believe her. According to her sworn testimony, she reported the abuse to the office, the secretary, a teacher, and the principal. But the assault continued.

“(I told the secretary) that he was always putting his hands on me; that he was making me really uncomfortable; and that he scared me. And she kind of laughed and she sent me in to talk to (the principal),” said the former student.

The girl’s mother testified she complained to different school officials on at least 20 separate occasions, but was told by the principal the allegations were “ridiculous.” He said “Mr. Siddons was just friendly and being friendly and that she (the mother) needed to have a conversion with (the daughter) about people being friendly.”

A.W. recently settled her lawsuit with the Archdiocese for $950,000. In November the school and parish sent an email to the parish and school community.

The email states “the entire community is saddened by this crime and the harm done to the victim/survivor.” It also says the janitor was “immediately terminated” when the incident was reported and that there was no indication when Siddons was hired that “he was a potential threat to children.”

According to A.W., what was left out of the communication was another slap in the face. There is no mention of years of warnings ignored or the dozens of missed opportunities to keep A.W. and other children at the school safe. A.W. said this information should be shared to help educate the community.

“I felt that their notification was the same thing that happened 30 years ago, where they were dismissing it and sweeping it under the table….They didn’t learn anything in 30 years.”

“The Archdiocese is giving the school staff and families a false sense of security by not acknowledging mistakes were made that allowed their former employee to abuse our client and other children. The people who run the school and the teachers need to understand what mistakes were made so they can try to make sure history doesn't repeat itself,” said A.W.’s attorney Jason P. Amala.

The Executive Director of Communications for the Archdiocese told KING the letter speaks for itself.

“This communication was an effort to be as transparent as possible and in a way that would be helpful to the school and the parishioners,” said Greg Magnoni of the Archdiocese.

Chuck Siddons died in 1997. Since A.W. came forward, another adult has filed suit against the Archdiocese alleging that she too suffered ongoing abuse at the hands of the janitor as a young girl.

None of the school leadership at St. John during Chuck Siddons’ tenure is currently employed by the school.