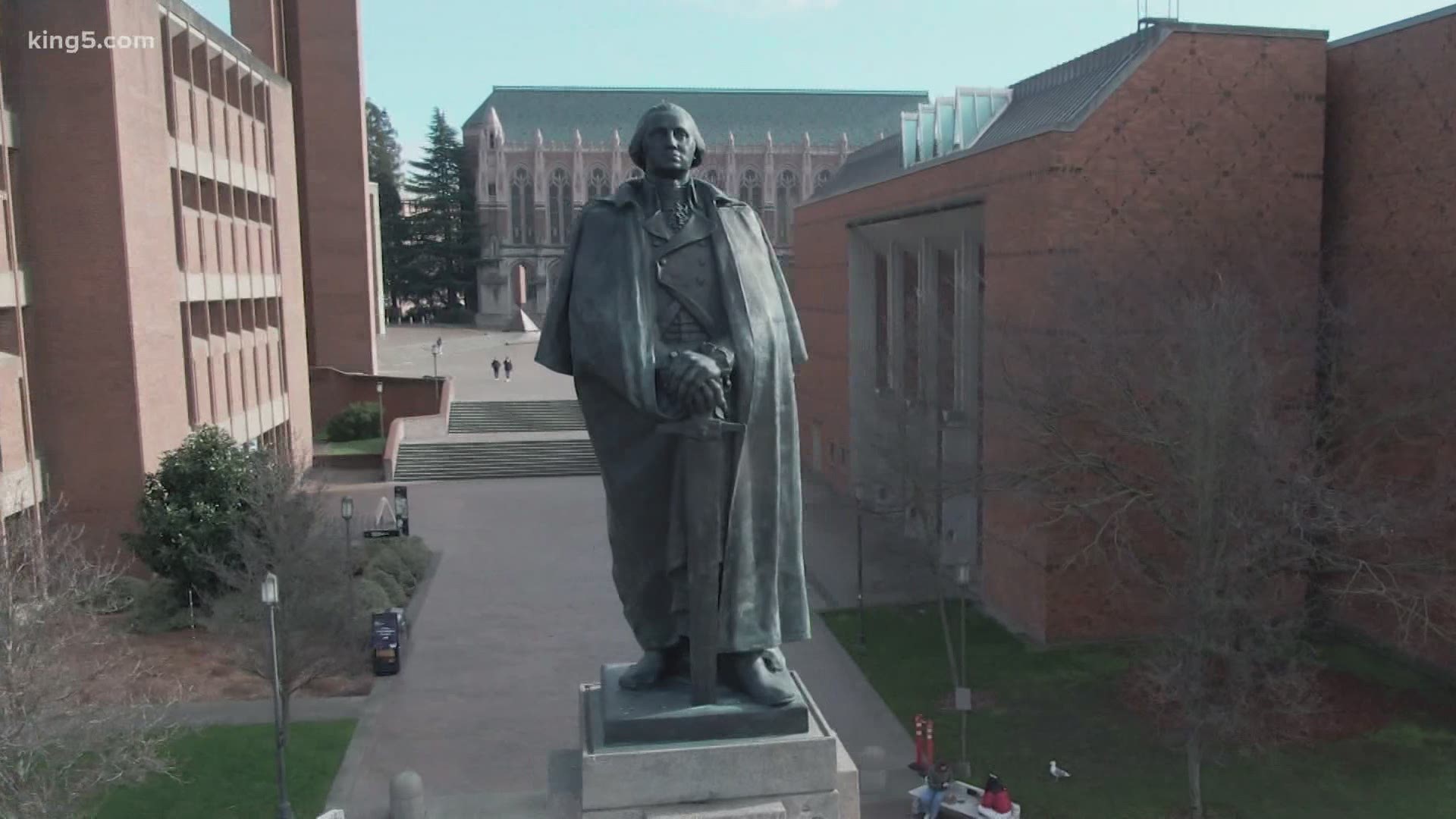 SEATTLE — In recent months, students on the University of Washington's campus have re-examined the role of racism and pushed for change.

When asked why the statue was included on the list, Mesfin replied, “We included it on the list because we had this discussion about the statue, just removing it, for years."

The university's statue celebrating America's first president, well known for his character and conviction, has been on campus since 1909. Students raise concerns now, as they have done in the past, because of George Washington's role as a slave owner.

Two separate petitions that the BSU was not involved in the creation of were started over the summer. One was about the statue and another suggested a name change for Washington state.

At George Washington's home outside of Washington, D.C., historians weighed in on the debate.

"I think it is up to individual communities to make those decisions about whether to retain Washington's name or Washington's statue,” said Jessie MacLeod, associate curator at George Washington's Mount Vernon. “We feel that Washington played an incredibly important role in the founding of this country, and his contributions made the United States what it is today."

MacLeod added that it is critical to understand Washington's role as a slave owner, and how his views changed over time.

At age 11, Washington inherited 10 slaves. Later in life, when he married wealthy widow Martha Custis, he gained dozens more slaves. By the time of his death, there were 317 slaves at the Mount Vernon estate.

Today, at the historic home, stories about the enslaved men, women and children are being told.

"For a long time, people didn't really want to address it, because it made them uncomfortable," said MacLeod. "They feared that it made the founders, people like George Washington, look bad. I think now we have realized that this is part of our history. This is a really important topic to cover."

History shows Washington was ambivalent about slavery but avoided the issue publicly. Behind closed doors, he went to great lengths to keep his slaves from being freed. After he became president and moved his household to Philadelphia, he secretly rotated slaves out of state every six months to avoid a Pennsylvania law that would have allowed them to gain freedom. He signed the Fugitive Slave Act of 1793 that allowed for the seizure and return of runaway slaves.

"The Washingtons in the meantime were furious that she had escaped, and they placed an advertisement in the local newspaper, which was common at the time for fugitive slaves," said MacLeod.

MacLeod said George Washington eventually began to question slavery, and in his will he freed the enslaved people he owned directly.

"You have to hold two opposing things at the same time," MacLeod said. "Washington was a great leader, and he was also a slave owner."

"Everybody is going to have to weigh the morality of Washington,” said Taylor. "I think we need to begin to look at all of these folks who were quote our leaders, the founding fathers if you want to call them that. We need to look at them with fresh eyes. We need to understand that all of them, as indeed are all of us, we're flawed. We're flawed."

Amid the national reflections on racism, calls to remove the UW’s George Washington statue were met with support and harsh criticism.

"We got an immense amount of hate mail, negative comments, negative feedback. They even called for our suspension,” said Ruth Mulugeta, BSU’s vice president of communications.

UW President Ana Mari Cauce and Mark A. Richards, provost and executive vice president for academic affairs, sent a letter in response to the Black Student Union's demands in September.

In regards to the statue, the university stated support for "a re-examination of campus symbols, figures or names that are connected with racism, past or present.”

The letter went on to say, “we also believe it is important to consider additional opportunities for symbols or namings that more fully recognize BIPOC contributions to our community, especially to our state and university.

“In June, we commissioned a group of faculty experts to recommend wording for a plaque or other such display that would provide a broader context on the life and impact of George Washington, who our state and university are both named for. This would include an explicit acknowledgment of his role as a slave holder.”

Mesfin and Mulugeta, the BSU president and vice president of communications, both said a plaque providing context would not satisfy their concerns about the statue.

Mesfin added that she sees the statue as a small part of a larger conversation, one she wants to keep having on campus.

UW convened a task force in the fall to re-examine its statues and monuments. The task force is expected to complete its analysis and recommendations on how to move forward by the end of winter quarter.

A KING 5 News poll surveyed 650 Washingtonians, asking what should happen to the university's statue of George Washington, and the majority, 59%, said the statue should remain in place.