Yonder Cider Company adapted to the pandemic by opening a walk-up counter in a garage in Seattle's Phinney Ridge neighborhood. But a neighbor was not happy. 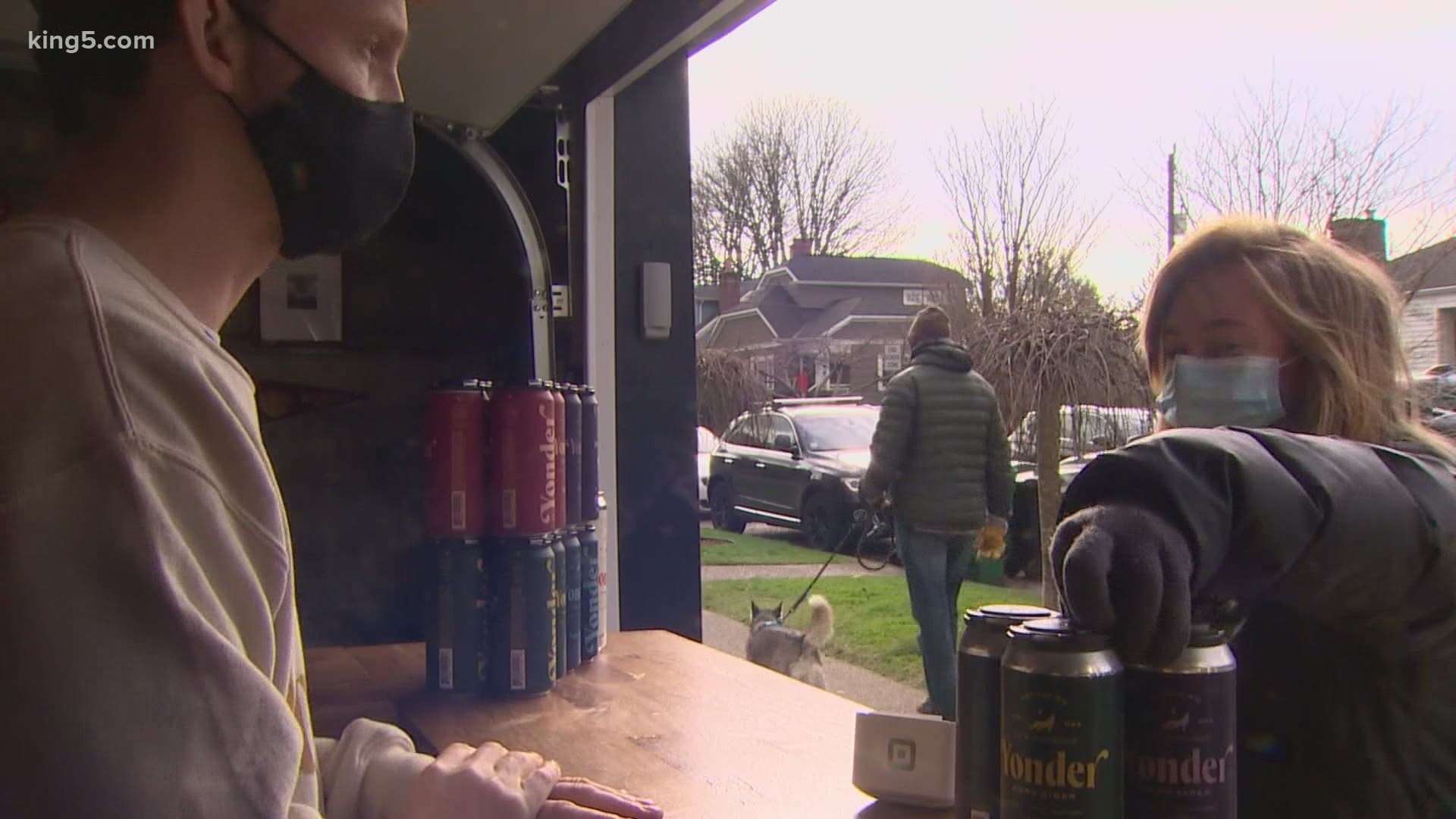 SEATTLE — Complaints are forcing the closure of a unique business venture from the Yonder Cider Company.

Founded by Caitlin Braam, the company hopes to eventually open a taproom to serve their hard ciders made from Wenatchee apples. But like so many bars and restaurants, the COVID-19 pandemic complicated things, so Yonder adapted – opening a walk-up counter for to-go orders out of Braam’s garage in Seattle’s Phinney Ridge neighborhood.

The garage has taps for growler fills, a wall with branded merch and a loyal following. It doesn't sell drinks to go, and the cider is not consumed on-site. Braam said many people enthusiastically supported their opening.

“It’s been a lot of fun,” said manager David Alton. “Been a labor of love.”

But not everyone was thrilled with the counter in a residential area. An anonymous person has filed multiple complaints with the city, questioning the proximity to schools and churches and claiming customers block the sidewalk.

“We have one person who has been calling the city a bunch of times, calling the cops on us a few times, because they don’t like the concept of a bar in their neighborhood,” explained Alton. “I think they kind of misconstrue what they’re doing here.”

Alton said they have not been able to figure out who is filing the complaints, but they wish they could just talk it out and explain that alcohol is not consumed on-site.

Yonder also contends they don’t block the sidewalk, and notes that the garage opens onto a street already closed to cars by the city’s “Stay Healthy Streets” initiative, so there's more room for walking and cyclists.

“We have our license, and did everything properly, and are very conscious of who we are and where we are,” said Braam.

Seattle P-I first reported the closure Tuesday, and Braam said they've been inundated with support as the news spread. On Wednesday, she had to drive to Wenatchee to pick up more cans of cider to sell.

Braam said they reached out to the city before opening for guidance. She admitted she knew there would be some gray area with the Stay Healthy Streets changes, but didn't expect this issue.

But now the increased scrutiny from the repeated complaints brought more attention from the Seattle Department of Construction and Inspections. In November, the department issued a Notice of Violation.

“You can operate a business from your residence if it doesn’t look like a business,” said Wendy Shark, a spokesperson with the city of Seattle.

The city takes issue with a sign outside the garage and the open door. Instead, officials want Yonder to operate the garage counter by appointment, and open the door only when customers arrive.

A city spokesperson told KING 5 they don’t want to force the closure of the business but are enforcing regulations already on the books for home businesses.

City officials noted Yonder has received several extensions since November, which is why their last weekend was pushed into February.

Braam said she doesn’t feel right shutting employees in a garage between sales, so they’ll move on to other ideas like delivery. But she does feel frustrated after watching state officials change rules during the pandemic to allow to-go cocktails but enforce these ordinances against her.

“My ask now is the city be flexible in a time that’s challenging,” she said.

Yonder is also circulating a petition of support, which Braam said had 2,500 signatures as of Wednesday afternoon.