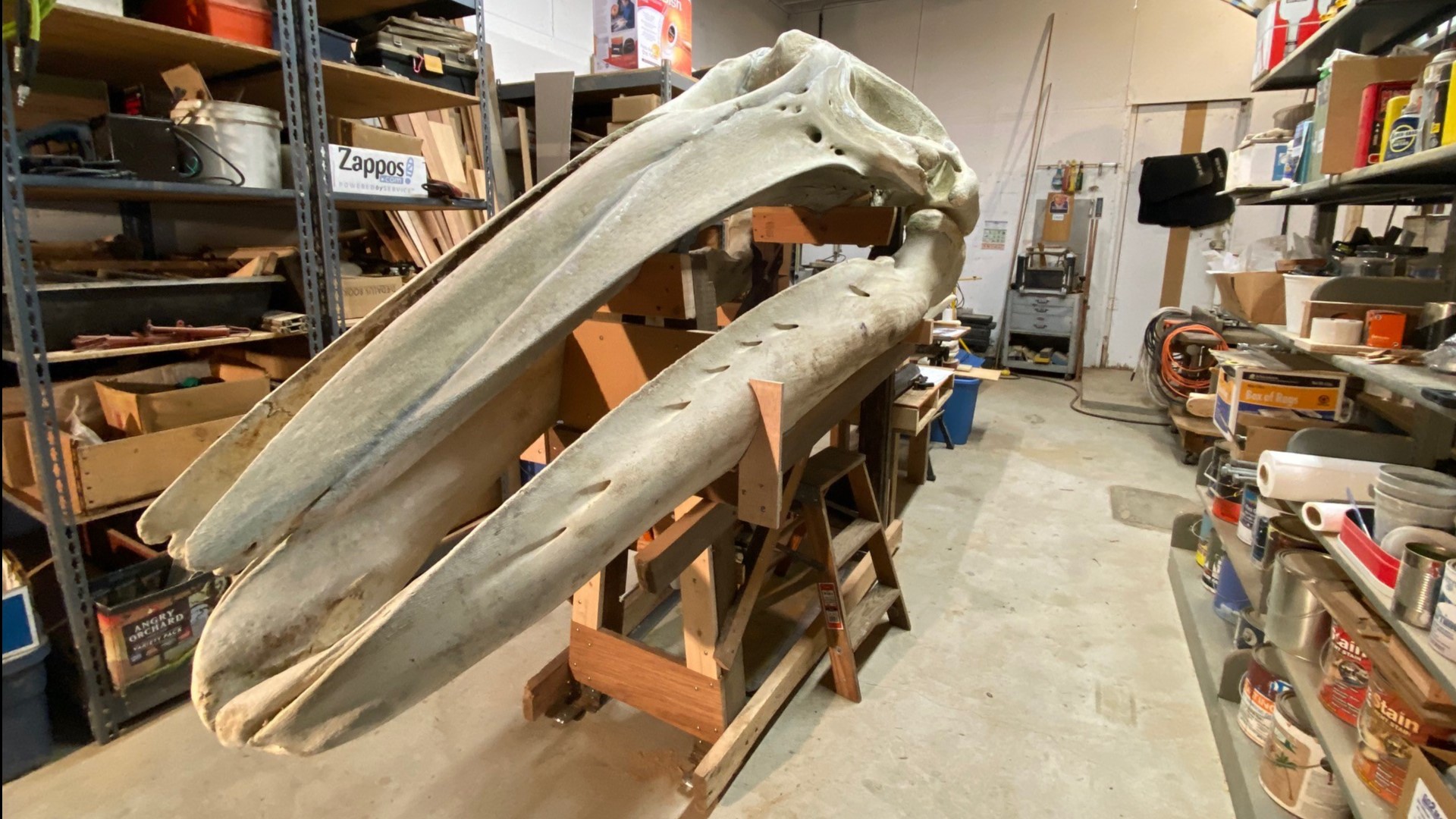 PORT HADLOCK, Wash. — Not many couples have an 8-foot-tall whale fin on their front porch.

"So this is the forearm, the fore flipper from Gunther,” explained Dr. Stefanie Worwag, gesturing to the skeletal flipper towering above her head.

How these bones got here is a whale of a tale.

'Gunther' is a 40-foot gray whale that died then washed up on a beach a few miles from Dr. Stefanie Worwag's and Mario Rivera's Port Hadlock home in June of 2019. Both are members of the Marine Mammal Stranding Network.

“And we were looking for somewhere to take the whale and nobody would take it, State Parks wouldn't take it, so Stephanie and I looked at each other and said 'let's take it to our beach'. That's how we got started.”

A team from Sealife Response Rehabilitation and Research towed the whale to their beach and Worwag - a veterinarian - helped with a necropsy the next day.

They found that the whale died of starvation - part of a mass die-off of gray whales that happened in 2019.

After that, they let nature take its course.

“I have pictures with like hundreds of maggots on the whale eating away, they did an awesome job,” said Worwag. The couple also shoveled lime on the carcass to help speed the decomposition and keep the odor down. The gray whale eventually got a name – Gunther. When tides and scavengers began to scatter the bones, they got a permit from NOAA - The National Oceanic and Atmospheric Administration - to keep them.

“We officially own Gunther,” said Rivera.

“We are going to use it for educational purposes with the Marine Science Center in Port Townsend,” explained Worwag.

Only in the Pacific Northwest could you find people willing to welcome a whale to their waterfront property to slowly decompose, then stow its bones in their garage. It’s been the ultimate pandemic science project.

"Every part has so many amazing experiences. I mean just seeing the decomposition then collecting the bones, then trying to put them together,” said Worwag.

And 'Gunther' has been adopted by the whole community: students from Port Hadlock’s Community Boat Project helped move his 500-pound skull with a rowboat...and some muscle.

And Retired shipwrights Les Schnick and Ric Brendan are now re-assembling that skull in their Port Townsend shop:

“Everybody wants to know about the whale project,” said Schnick. “There's been a lot of show and tell since it's been in my shop.”

And the beautiful bones of this beast are already doing their job:

"I've learned a lot about whales that I never knew before,” said Schnick, showing where the whale’s eye was and pointing out the nerve entry holes along the massive lower jawbone.

The goal? To rebuild the entire skeleton -- all 157 bones.

Gunther's final resting place will be in the backyard of Worwag and Rivera’s home. An unlikely spot, but a place of honor, where Gunther will have a second life, helping others learn about the whales that still live in the waters of the Salish Sea.