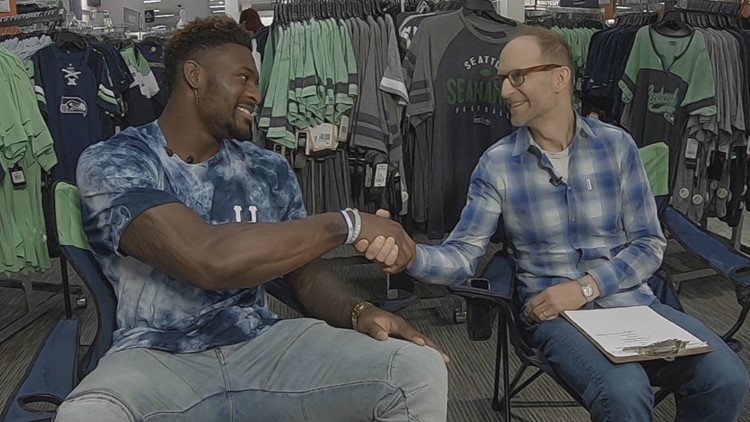 Up close and personal with Seahawk DK Metcalf

SEATTLE — Can't help but notice the shoes. DK Metcalf shows up for our chat at Southcenter Mall in some serious white skips, high-tops covered in spikes. He's there to surprise teachers with a shopping spree, thanks to JCPenney. "I'm into these shoes. I like this brand. Christian Loub," he says, referring to French designer Christian Louboutin. "Yeah they're nice," he says.

After we finish discussing his shoes, he agrees go toe to toe for our long-running feature "Hangin' with the Hawks," when we get up close and personal with Seahawks players and coaches. Here's the back and forth.

Michael King (MK): "The famous photo. (I show him the picture that was all over the web of DK after a workout, looking so ripped, fans thought it was fake). Why do you think people went so crazy for it?"

DK: "It looks photoshopped. But yes sir, it's real. You don't believe that's real? Like I'm not supposed to look like that."

Which he's not. Receiver's don't generally look like that. Which brings us to his first meeting with Seahawks Coach Pete Carroll.

DK: "I took my shirt off. A scout said, 'When you come to our meeting, just take your shirt off. It'll be hilarious. Pete'll love it.' Right before I walked in, I did it. Looks like it was a great decision."

MK: "Because you hadn't been drafted yet, right? So he was impressed! And what did he do?"

MK: "So were YOU impressed?"

DK: "I was more shocked that he would do it! He was pretty ripped. It shows his personality. He kinda lightened the moment from the moment I walked in the door."

MK: "There's also a lotta talk about your 1.9 percent body fat at the NFL Combine. So what are you at now?"

MK: "Yeah you gotta trim down. I understand you told ESPN, 'You haven't seen a DK Metcalf in The League yet.' What do you mean by that?"

DK: "I mean you haven't seen a person with my mindset and my ability. I'm very confident in myself."

MK: "So are you saying you'll be the greatest receiver of all time?"

MK: "Seahawks fans will love to hear that. Different subject, I hear you're a big fan of 'The Fresh Prince of Bel-Air.' How old ARE you?! How do you even know about this show?"