The Washington Department of Fish and Wildlife seized three baby deer and an elk, because they had become too accustomed to humans. 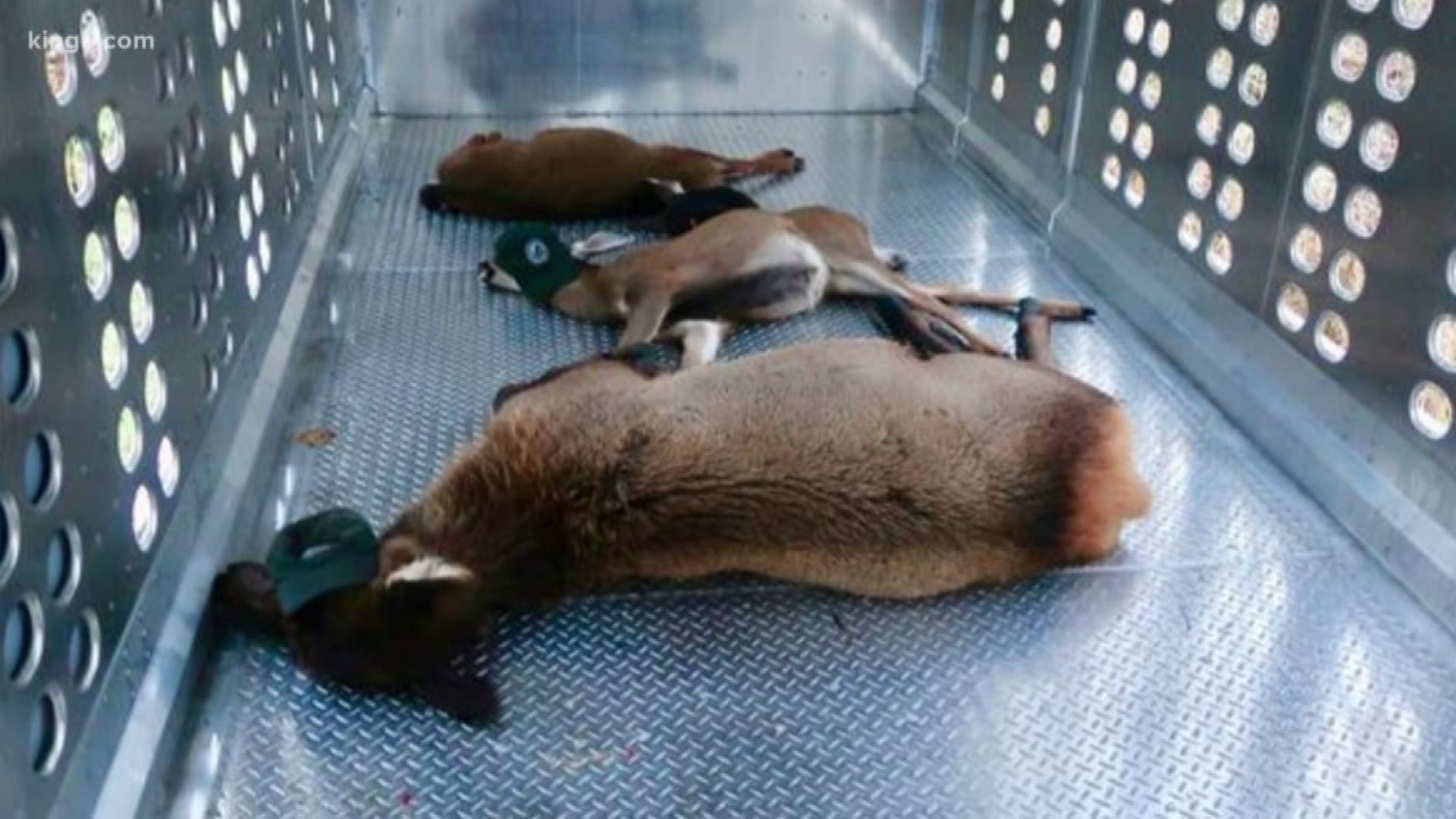 A wildlife rehabilitation facility in Rochester was reeling Monday after the Washington Department of Fish and Wildlife seized three baby deer and an elk.

The animals were euthanized, because officials say they'd gotten too used to humans.

One photo WDFW shared with KING 5 shows a fawn sucking on a person's ear. State officials call it a pattern at For Heaven's Sake Animal Rescue and Rehabilitation. Several young deer and an elk were all too comfortable around humans, they claim.

In a press release sent Monday, WDFW wrote that "state regulations and national wildlife rehabilitation standards direct wildlife managers to euthanize habituated animals rather than release them into the wild."

"The situation at the Rochester facility could have been avoided if the rehabilitators had limited human contact with the animals, weaned them sooner, and released them into the wild in accordance with state guidelines," said WDFW Wildlife Program Assistant Director Eric Gardner, in the release.

But the allegations are not true, if you ask the woman who runs the facility.

"All the fencing covered with tarp so they can't see us," Claudia Supensky pointed out.

Supensky showed KING 5 the area where the deer and elk live, designed to reduce wildlife interaction with humans. No one is allowed to treat the animals like pets, she says.

That's why she was shocked to learn a summer intern told the state exactly that, and after a few visits, state officials showed up with a trailer to seize the animals. They took three fawn and one elk.

"Just blew my mind. I couldn't believe they could just come in and take them," she said.

WDFW says wildlife is state property and the law requires any wildlife to be removed if it loses its fear of humans. They point to photos of the animals lingering around officers.

"What we saw were animals that were very used to humans, came up to the people that entered the pen, looking to be fed.The elk head-butted one of our staff," Gardner said.

Gardner called it a tough decision, but a necessary one. Deer and elk that grow accustomed to humans have a harder time surviving in the wild and can also be a danger to humans. He says they're normally released prior to winter, and the organization's plan to keep the animals until spring is atypical.

Supensky disagrees. She says some of the animals just needed more time to learn wild behaviors after weeks of being bottle fed. It's common practice for them, she says, to keep deer over winter to give them a better chance at survival and no one has yet to tell them it's bad practice. She also questions why the animals needed to be darted and tranquilized for loading onto WDFW's trailer if they trusted humans so much.

Left with little word about what would happen to her facility, Supensky didn't know that the four animals seized were euthanized until KING 5 told her Monday.

"They were? This is the most awful thing I've ever experienced in my life," she cried.

WDFW is hoping to place some of the remaining deer in a research study at Washington State University.

They also hope to use this experience as a learning lesson for the public. Many young ungulates taken to rehab facilities are mistakenly removed from their mothers by people who assume the animals are abandoned. If found, wild animals should always be left alone while appropriate authorities are called.

"It's really unfortunate that something didn't go right this time. None of us like being where we're at. It's not a pleasant situation for any of us. We really hope we can continue to work with our rehabbers and provide the service we all want them to provide which is to recover these animals and get them released back to the wild," Gardner said.

WDFW won't let For Heaven's Sake take any more deer and elk, but the group decided to stop taking all new wildlife because they're so worried the state might seize more.

"We know for a fact that given the time, these animals could've been released. To take them and kill them, healthy animals we've put all the time and work into?" Supenksy said. "This is a matter of being killed before they were given the time to be released. My heart is so sick and so sad."

11 deer may be euthanized