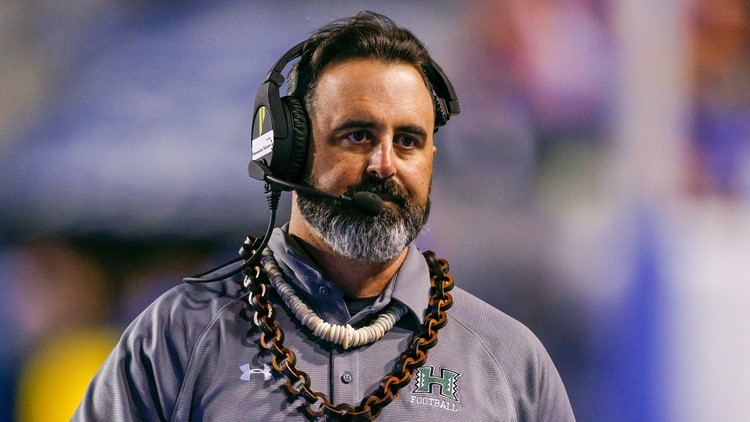 PULLMAN, Wash — Washington State has hired Nick Rolovich as its new football coach. Rolovich is leaving behind the beaches of Hawaii for the chance to be a Power Five coach.

Rolovich agreed to a five-year contract that will pay about $3 million per season. He replaces Mike Leach, who left last week for the head job at Mississippi State.

“We set a goal of bringing the best coach possible to Washington State University,” said Athletic Director PatChun in a statement. “Nick Rolovich is a genuine person, a program builder, an innovator and the exact fit to lead Cougar Football. Coach Rolovich is committed to academic achievement and developing every aspect of our student-athletes. He has a vision of taking Cougar Football on a path to win championships. We are fortunate to have Nick lead our program and we welcome his wife Analea, along with their daughter Alana and sons Daniel, William and Patrick to the Cougar Family.”

Rolovich's pass-happy, high-scoring offense is similar to Leach's system. Rolovich was the coach at Hawaii for four seasons, going 28-27 and taking the Rainbow Warriors to three bowl games.

“I’d like to thank President Schulz and Pat for the opportunity and the trust they have put in me to lead these young men,” said Rolovich. “Not only on the football field, but we truly believe we are raising tomorrow’s husbands, fathers and community leaders. The excitement is real and it’s honest. Most recently what Coach Leach has built gives us a high starting point. I appreciate him as a friend and what he has done to build the program.

Rolovich, 40, spent a total of eight seasons at the University of Hawai’i, the last four as head coach. He also served as Nevada’s offensive coordinator for four seasons and spent two years coaching quarterbacks at City College of San Francisco. He began his coaching career as an assistant coach at San Marin High School in Northern California.