VERIFY: What experts say on Trump’s ability to halt funds for ‘anarchist jurisdictions’

A recent Presidential memo calls for federal funds to be blocked from Portland, Washington D.C., Seattle and New York. 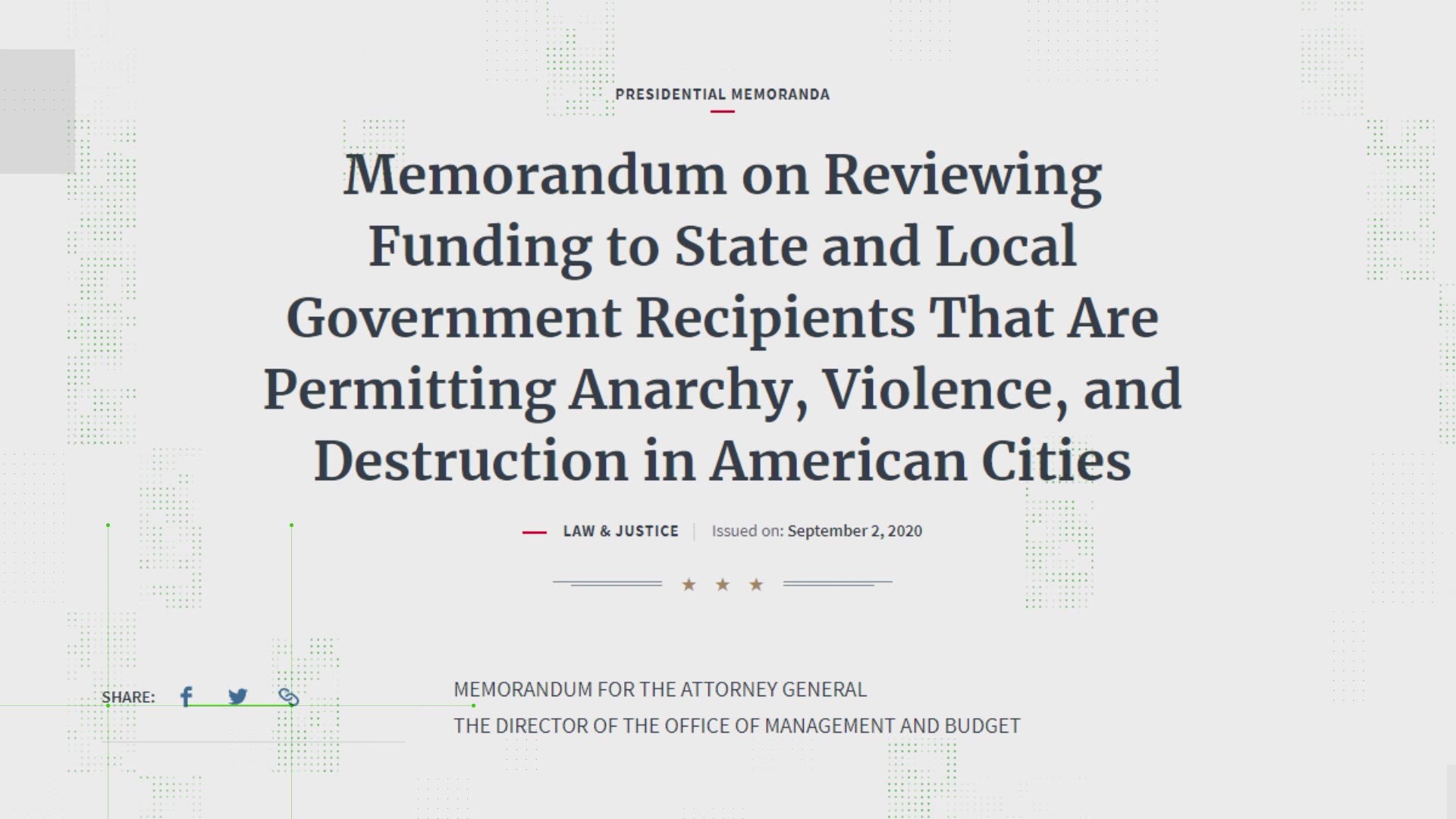 “My administration will not allow federal tax dollars to fund cities that allow themselves to deteriorate into lawless zones,” his memo said.

Can President Trump have grants to cities and states pulled?

Essentially, no, he can’t order them ended. That is a decision for Congress which is complicated and typically gets bogged down in court.

Richard Su, a Constitutional law expert, and Edward Waters, a Washington lawyer specializing in federal grants, say it is unlikely that Trump can claw back the funding from the jurisdictions.

Trump’s executive order to the U.S. attorney general and the Office of Management and Budget gives 30 days to come up with guidance on restricting funds to “anarchist jurisdictions.”

“Under the Constitution, the branch of government that is responsible for taxing and spending -- including grants, of course -- is the U.S Congress, not the executive branch,” said Waters, managing partner of Feldesman Tucker Leifer Fidell LLP, which specializes in federal grants.

Even so, Waters and Su, a professor at the University of North Carolina School of Law and expert in constitutional law, say U.S. presidents have long used federal funding to carry out their policies.

Grants “for the last 50 years have been the primary vehicle for the federal government to effectuate federal policy. Their setting the policy has a big impact on federal grant programs,” Waters said.

However, it is up to Congress, with the power of the purse, to fund the programs.

A president can’t use funding to coerce policy, Su and Waters said. That is, an administration can’t make the penalty for not implementing a policy so devastating that it would result in the loss of, say, Medicaid funds.

“Trump is walking a fine line,” Su said. “He wants the punishment that the deprivation be strong enough that it would force cities to bend a knee to his policies, but if it’s too strong, the Supreme Court is going to say that leaves no condition [for state or local choice]. And that’s coercive and that itself is unconstitutional.”

Waters and Su said the current memo is similar to the 2017 executive order against sanctuary cities, which remains in the courts. In that case, the president sought to withdraw funding for communities that didn’t carry out immigration enforcement policy. That was in part because the financial burden of the policy was borne by localities and thus unconstitutional, Waters said.

The current memorandum “is just asking federal agencies to investigate whether there is a way to withdraw federal funds from these particular cities,” Su said. “In some ways, it doesn’t do anything right now and we have to see what the agencies uncover. My initial suspicion is they’re probably going to uncover very little.”

The executive order is also fuzzy on which jurisdictions it’s targeting, saying “outrageous acts of violence and destruction have continued unabated in many of America’s cities,” although the document names Portland, Seattle, New York and Washington, D.C.

“If you’re trying to take back grants that have already been awarded, that’s a much harder task,” Waters added.

Su and Waters said that if Democratic presidential candidate Joe Biden wins in November, the directives in the memorandum will no doubt die.

“Depending on how the election goes, this is all an academic discussion or it will be a very real sometime at the end of this year,” Waters said.

RELATED: VERIFY: How internet trolls use websites like antifa.com to raise unfounded suspicions

RELATED: VERIFY: Why COVID-19 isn’t the only listed cause of most coronavirus-related deaths