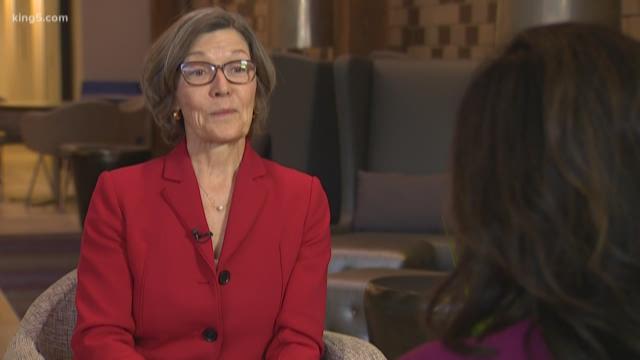 Pierce County Prosecutor Mark Lindquist faces a new challenger: an assistant attorney general who once worked for him.

Mary Robnett announced her candidacy Thursday, saying the prosecutor's office needs a change in leadership but was almost upstaged by some interesting developments involving Lindquist.

"I was at the Pierce County Prosecutor's Office for 18 years," Robnett told KING 5.

As the chief criminal deputy in the Pierce County Prosecutor's Office, Mary Robnett went up against some of the most notorious offenders in the county's history, like the Craiglist killers, and child rapist and murderer Terapon Adhahn.

"Holding bad guys accountable and empowering victims who are victimized in the worst sort of way," she said. "Absolutely the best work I've ever done."

Why did she leave?

"I was uncomfortable working for Mr. Lindquist. We were friends, colleagues. He promoted me, I supported him politically, but I was too disappointed with the way he was running the office," she said.

Incumbent Mark Lindquist offered to talk to KING 5 Thursday morning about his lawsuit against the makers of prescription opioids.

When asked about a challenger entering the race against him, he said, "We don't know of any at this time, but it's a free country. People can run for office. But I'm going to run on this: We've been keeping the community safe."

Lindquist sailed through two elections but faced a failed recall and accusations of retaliation and prosecutorial misconduct.

After a losing a 6-year costly legal battle to keep his text messages private, Wednesday night the Pierce County prosecutor posted nine of them to his Facebook page,calling them "trivial."

"The timing is weird," said Robnett.

Robnett knows she's going up against an established incumbent, but this first-time candidate said she's used to hard fights.

"I'm not meek," said Robnett. "My family and friends know who I am. I am going to be on the high road during this campaign. Mary Robnett is Mary Robnett. I'm going to let Mark be Mark."

KING 5 reached out to Lindquist's office after Robnett made her official announcement. In an email, he wrote, "Baseless complaints are a fact of life in politics these days, unfortunately, but I tune out the noise and stay focused on keeping our community safe."