Biden called the past days “an extraordinarily collaborative and productive meeting” at the Group of Seven summit of wealthy democracies. 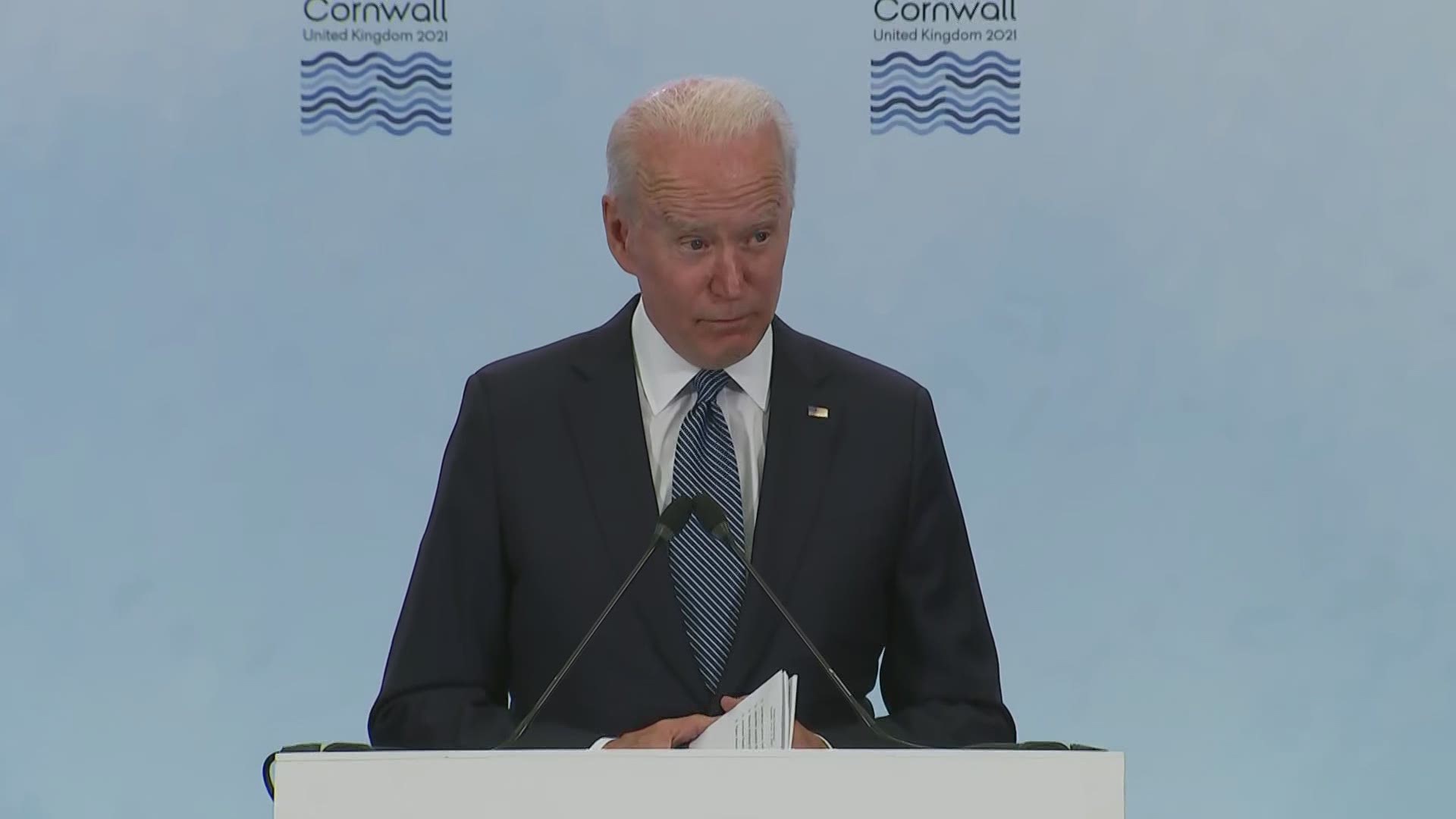 President Joe Biden on Sunday said the United States had restored its presence on the world stage as he used his first overseas trip since taking office to connect with a new generation of leaders from some of the world's most powerful countries and more closely unite allies on addressing the coronavirus pandemic and China's trade and labor practices.

As he wrapped three days of what he called "an extraordinarily collaborative and productive meeting" at the Group of Seven summit of wealthy democracies, Biden said there was "genuine enthusiasm" for his engagement.

"America's back in the business of leading the world alongside nations who share our most deeply held values," Biden said at a news conference before leaving Cornwall to pay a visit with Queen Elizabeth II at Windsor Castle. "I think we've made progress in reestablishing American credibility among our closest friends."

The president, who is on an eight-day, three country trip, left his mark on the G-7 by announcing a commitment to share 500 million coronavirus vaccine doses with the world and pressing allies to do the same. The leaders on Sunday confirmed their intent to donate more than 1 billion doses to low-income countries in the next year.

He also fought for the leaders' joint statement to include specific language criticizing China's use of forced labor and other human rights abuses as he worked to cast the rivalry with Beijing as the defining competition for the 21st century. Leaders also embraced his call for a 15% global minimum corporate tax rate.

"We need to be able to deal with China in all of those areas coming from a position of strength and coming from a united position." U.S. Secretary of State Anthony Blinken told CBS News' "Face the Nation" on Sunday. "I think what the president was able to do in these last couple of days was bring countries closer together in dealing with some of the challenges posed by China."

The other G-7 allies did their part in creating the impression that Biden was part of "the Club" and sought to help reinforce Biden's "America is back" mantra, including by embracing the his campaign slogan to "Build Back Better" from the pandemic.

At the summit, Biden met France's Emmanuel Macron for the first time, and the two acted like old friends.

Macron did not utter Donald Trump's name but offered an unambiguous shot at the former president. Macron noted his his relief that with Biden, he was now working with an American president "willing to cooperate."

"What you demonstrate is leadership is partnership," Macron said of Biden.

Most European allies had been disenchanted with Trump's grumbling of "global freeloaders" and espousing an "America First" policy, so Biden had the challenge of convincing a skeptical audience that the last U.S. administration was not a harbinger of a more insular country.

Following the news conference, Biden planned to travel to Windsor Castle for a private audience with the queen— becoming the 13th president to have met with the 95-year-old monarch during her nearly-70 year reign.

The president was then scheduled to fly Brussels for meetings with NATO and European Union leaders before a summit with Russian President Vladimir Putin on Wednesday in Geneva.