Neighbors are worried about land value, air quality, traffic and the health of the Cedar River, which is important salmon habitat. 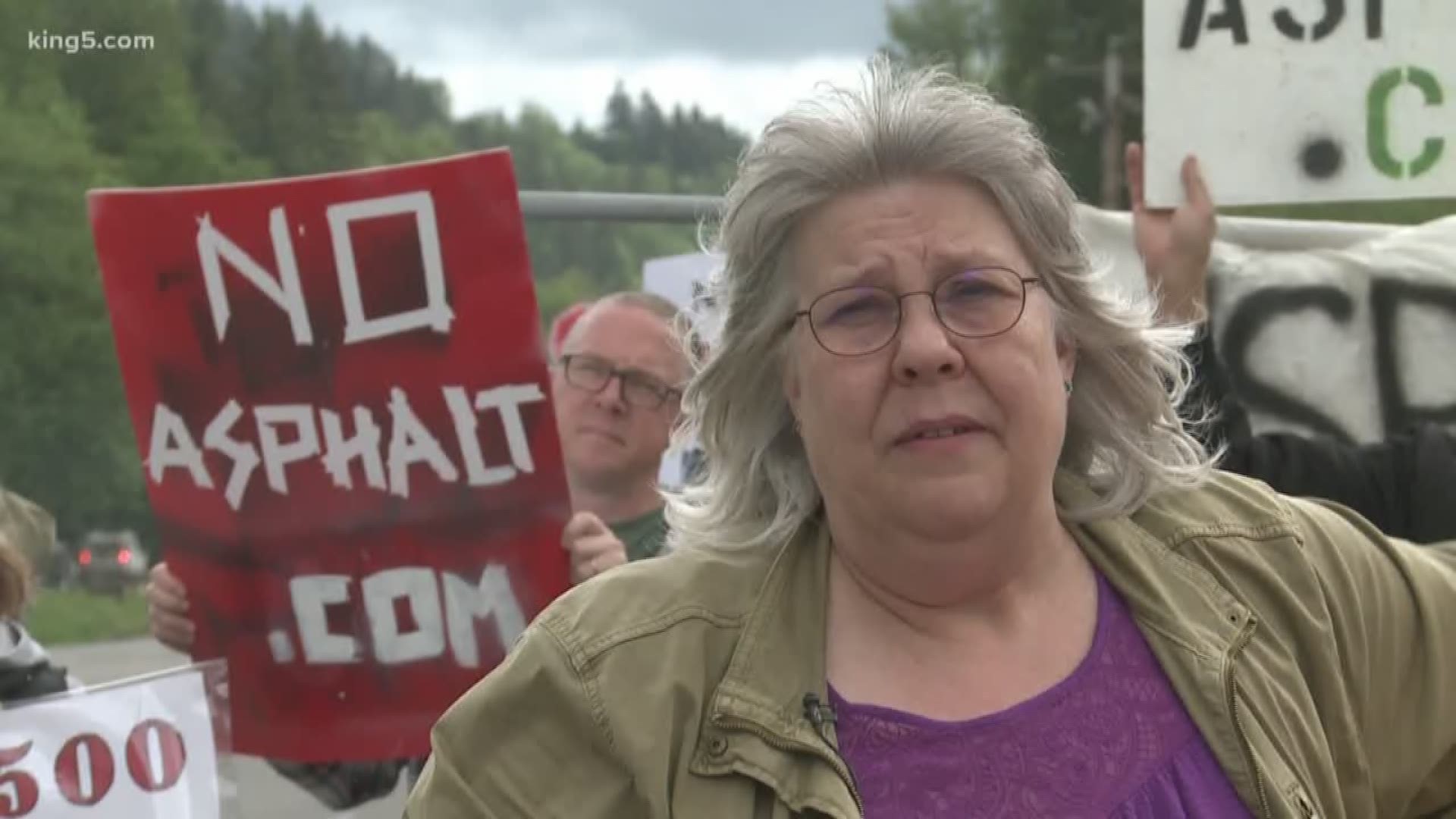 Neighbors continue to protest a proposed asphalt plant in Maple Valley as a temporary moratorium on permitting draws to an end.

"This is not the place for an asphalt plant," said Tammera Widell.

Widell and her neighbors don't like the proposed future for the site at 18825 SE Renton Maple Valley Road. Lakeside Industries wants to build one of their asphalt plants on what has been a landscape materials center.

Neighbors are worried about land value, air quality, traffic and the health of the Cedar River, which is important salmon habitat. They also believe it's an example of spot zoning and doesn't fit with the overall climate of the area.

"The intention was to allow a landscaping material processing center, not an asphalt company. We have nothing against Lakeside. It's just where they're trying to put the property," Dutch Deutschman said.

"It's a bad land use decision. It's right on the entryway of Maple Valley, Black Diamond, Covington - over 50,000 people. And I don't think anybody who lives out there wants an asphalt plant to be the gateway of their beautiful city," Dunn said.

Dunn successfully proposed a 6-month halt to the project, which ends next week. Lobbying in favor of the asphalt plant and working with Lakeside Industries, however, is County Executive Dow Constantine's former chief of staff Sung Yang.

"He's a good guy, and he's entitled to go to the private sector and do that. Again, I just think this is a bad site. He's going to argue for it in favor of the company. America's a great place. You can do that," Dunn said. "But my job is to make sure we have sensible land use decisions, and I don't think we have one here."

Lakeside says they've safely operated asphalt plants for decades and this is no different, sending KING 5 the following statement:

"Lakeside is seeking to relocate an asphalt production facility that will serve the entire region. It's important for the public to know asphalt is not toxic, and it does not harm fish or humans. In fact, our asphalt is highly sustainable – it's used to line drinking reservoirs and fish hatcheries. Asphalt is also used to maintain and preserve our public roads, schools, airports, and neighborhood streets, to name just a few. Lakeside Industries is a third-generation, family owned, locally based business that has safely operated asphalt plants for decades across the Northwest. The proposed site is already zoned for industrial uses – including asphalt plants -- and it's right on State Hwy. 169, a major thoroughfare many of our trucks are already using. So, Lakeside is not asking for any special treatment in our permit-application process. That is why we were surprised when the King County Council adopted a six-month moratorium last November. We felt that, at that point, we needed to ensure our policy makers had complete and accurate information regarding asphalt plants, and our proposed facility, in particular. We retained Pacific Public Affairs and Sung Yang to help correct some of the misinformation. Sung has two decades of experience working on public issues, including in land use, so we thought his guidance and counsel could help."

The project is also supported by some for job creation. Dale W. Cannon, the Secretary Treasurer and Business Manager of LiUNA Local 242 laborers' union, wrote a letter to the councilmembers opposing any extension of the moratorium.

"Lakeside Industries employs hundreds of Union Laborers and has a longstanding culture for safety, regulatory adherence, and social and environmental conscientiousness. The development of this plant is critically important to the economic vitality of King County – it will provide a great number of family wage jobs and be the source for a sustained supply of asphalt to preserve and maintain King County roads," the letter reads.

King County officials say the site is appropriately zoned and will have to complete extensive review.

"We saw that our existing codes are so rigorous at the local level, at the state level, and at the federal level, that it would cover the impacts of a development such as from an asphalt plant," Jim Chan said. "We do take their concerns seriously like we do with any other development. Our charge for our department is responsible development."

That answer is not good enough for neighbors.