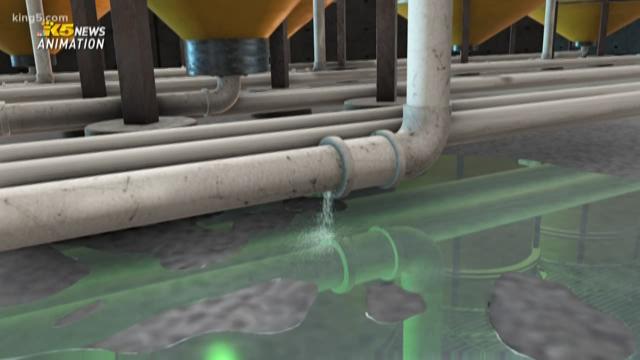 Civilian workers at the Navy shipyard in Bremerton were exposed to harmful poisons like cyanide and chlorine, but it took seven years for the shipyard’s managers to take action.

The exposures happened at a wastewater treatment facility at the Puget Sound Naval Shipyard. The KING 5 Investigators found that the facility was the subject of warnings and complaints about equipment and design failures before it opened in 2006.

Managers at the shipyard only took serious steps to address the problems in 2013, by which time some workers had been sickened by the chemicals.

That view is supported by six medical professionals at Harborview and Group Health/Kaiser Permanente who diagnosed Albert with occupational reactive airway disease, irritable larynx, vocal cord dysfunction as well as anxiety and depression – all due to workplace exposures.

“I believed what they told me and I’m suffering because of it,” said Albert, who worked inside the facility on and off from 2006 to 2015. “It’s scary. There’s days that I can breathe okay and days that are horrible. Just cold air can be a trigger (for coughing spells and difficulty breathing).”

Through World War I and II, PSNS served a pivotal role to keep the Navy battle-ready. The mission was to build ships and then to repair warships of the Pacific fleet that were damaged in battle. It’s the biggest shipyard on the West Coast, employing roughly 13,500 civilians who overhaul, repair and decommission ships and submarines.

The industrial processes used at the shipyard generate thousands of gallons of hazardous liquids a day. The toxins include the known carcinogen hexavalent chromium, as well as lead, mercury, PCBs, sulfur dioxide, chlorine and cyanide.

Several waste streams are cleaned at the plant that opened in 2006, called Building 1109. But even prior to its opening, employees expressed concerns that the $9 million facility lacked safe and effective features.

Victoria Whitney, a retired shipyard PhD of environmental engineering, was tasked with meeting with the workers to assess their complaints before the building was officially opened.

“Exposure to a lot of these chemicals can result in death,” said Whitney. “I had concerns that there were multiple spills reported, which means there were exposures (to toxins.) It was clear that (the workforce) was going to get exposed sooner or later.”

Whitney documented 43 concerns and submitted them to her supervisor. Among the problems she identified:

Whitney said some, but not all, of the concerns were fixed before the wastewater plant went into operation. Yet even after Building 1109 began processing wastewater, more complaints rolled in. Joe Giordano was the lead operator in 2006.

“I told them, we have leaks constantly. Things aren’t working right,” said Giordano, who is now retired. “The exposure I had to chemicals, I think about it all the time, like (perhaps) I could get cancer of some kind.”

Giordano said he urged managers to keep contractors who had built the plant on longer to fix problems, but that there was pressure to take possession of the plant and move on.

“Upper management would come and say, ‘We need to take this plant over, and get rid of the contractors. They’re pushing us to get out of here.’ And I said, ‘There’s a lot of problems here, we can’t do it,’” said Giordano. “Everything was breaking down and they still wanted us to process (the waste waters.) What were we to do?”

Over the years evacuations from the plant were commonplace: Warning alarms sounded, workers smelled strong chemical odors, and sometimes workers were overcome by gasses.

But by the time firefighters arrived, the would not find evidence of unsafe conditions. In one instance Joe Giardano said he ran out of the facility, gasping for air.

“I couldn’t breathe. I couldn’t hardly breathe,” said Giardano. “That was scary, oh it was.”

“There were so many days that scared the hell out of me in that plant,” said Albert. “I still have nightmares because of it -- hearing the alarms, waking up wanting to run out of the house or the building. It was so scary.”

Other current and former Building 1109 employees who spoke with KING 5 said they are suffering from health problems, including peptic ulcer disease, skin lesions, memory loss, and other lung diseases.

PSNS public affairs specialists contacted for this report said the facility is safe and has been since the opening in 2006.

“The facility is and always has been safe,” said J.C. Mathews, deputy public affairs officer at Puget Sound Naval Shipyard and Intermediate Maintenance Facility. “Building 1109 was constructed in 2006 using state-of-the-art systems which met industry standards…..PSNS & IMF has no evidence of adverse health effects resulting from work in Building 1109, and no injuries have been identified.”

The Navy spokesperson also said no workers had been exposed to toxins above the legal limits set by the federal Occupational Safety and Health Administration.

“(An) in-depth review of plant operations beginning in 2012 was conducted in response to employee concerns and feedback. As part of this review, industrial hygienists conducted monitoring during various treatment processes performed in the plant during its normal use. Sampling in various scenarios was conducted, and it was determined that the employees were not exposed above OSHA (limits),” said Mathews.

But after a thorough review of hundreds of internal Navy documents, the KING 5 Investigators found otherwise. Between March 2012 and July 2013, several investigations -- Critique Reports and Safety Trouble Reports – were conducted into safety at Building 1109. The investigations’ conclusions were signed by top PSNS managers, including the chief engineer and the facilities engineering manager. A host of problems were documented:

• Alarms “did not activate” as they should.

• The “ventilation system was not adequate” to remove toxins from breathing zones.

• Procedures in the plant manual “were not sufficient.”

• Alarms were not “periodically tested.”

“Nobody should have been shocked. I warned them. I wrote a white paper that spelled things out that these things need to be addressed,” said Victoria Whitney.

Other documents obtained by KING 5 show toxins measured at extremely dangerous levels inside the plant. A 2013 Personal Breathing Zone Air Monitoring Results document shows on April 10, 2013 chlorine levels measured nine times what is considered “immediately hazardous to life and health.” Cyanide was measured on the same day at more than double the legal limit.

The plant was finally shut down in 2013 after Kevin Albert was promoted to shop supervisor. He said his failing health and chronic problems at the plant led him to demand that experts come in to thoroughly test the air during routine work hours. Between April 5, 2013, and April 10, 2013, the testing measured unsafe levels of toxins on several occasions. Employees had to evacuate the building five times during the five days of testing.

Albert and another former manager confirm to KING 5 that thorough testing of this nature had not taken place in the plant since 2007.

“At this point…it was too late. We had already been exposed and we’d already been having the issues,” said Albert. “They let it continue. That’s the part where I am appalled. And I don’t understand how this could happen in our country.”

Kevin Albert has not been able to work at the shipyard since 2015 because he says the chemicals used across the complex exacerbate his breathing problems. He has hired an attorney and is pursuing legal options.

Since the shutdown in 2013, the Navy has spent $2 million in upgrades to the facility. Public affairs specialists said all chemical processes are back online as of March 10, 2017. They also said the changes were not made due to an unsafe workplace.

“The purpose of the $2 million project was to take advantage of engineering improvements to make the facility even safer and more efficient,” said the spokesperson.

“Anybody that thinks it’s not true, this didn’t happen, ‘Go stick your head in one of those tanks (for) half an hour. You just breathe for half an hour and then live my life and tell me how you feel,’” said Albert.