Changes coming to Northgate Mall ahead of light rail

Owners of the Northgate Mall submitted a new plan to the city of Seattle to re-develop the existing structure. 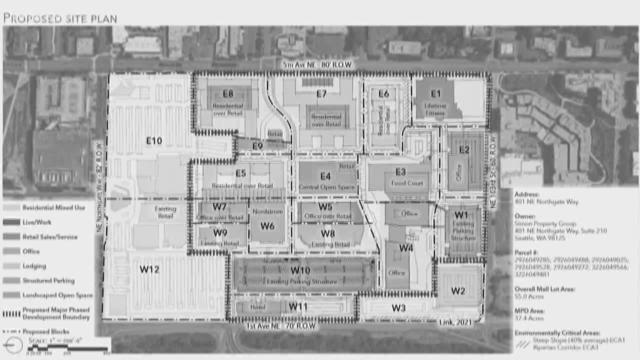 New plans filed Thursday with the city of Seattle show the Simon Property Group plans to add office and residential space to the mall.

The majority of the changes appear to take place above the mall and over much of the current parking lot. Additions include a hotel that sits on the eastern side of the property, just off 1st Avenue NE, and a fitness center on the corner of 5th Avenue NE and NE 103rd Street.

According to The Seattle Times, the Simon Property Group plans to add 500,000 to 750,000 square feet of office space; an addition that could accommodate at least 2,500 office workers.

The biggest question remains: Will the additions to the mall's existing structure be completed by the time Sound Transit plans to open light rail in 2021?