At issue: legally binding protective covenants promising that their lots will only be used for residential purposes -- not for busy transit or rail lines. 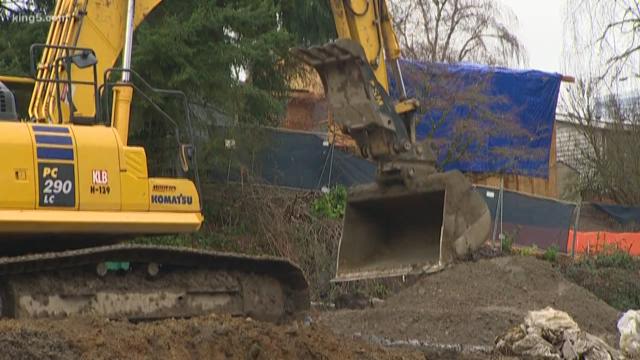 Sound Transit has filed a lawsuit against approximately 40 Bellevue homeowners and the case is headed to a jury trial. The regional transit agency is suing the residents after they refused to accept a $300 offer as “just compensation” for changing the character of their neighborhood, known as Surrey Downs. As per the Washington state Constitution, "just compensation" must be offered prior to property or property rights being taken by a governmental agency.

Since 1952, Surrey Downs residents have had legally binding protective covenants promising that the lots will only be used for residential purposes – not for busy transit stations or light rail lines. In addition, the covenants state the homeowners are to be free from annoying sounds and conditions: “There shall be no noise, vibration, smoke, dust….which would exceed that normally produced by a single residence.” The residents say they deserve a lot more than $300 for putting up with heavy construction for seven years, and after that, a train running by their neighborhood every seven minutes.

“I thought the $300 was a slap in the face,” said Dick Applestone, who has lived in the same Surrey Downs home for 59 years. “And $300, if you look at the price of these homes is peanuts, it’s an insult is what it is.”

“The noise, the construction, the vibration, has all been terrible,” said resident Gayle McElroy who has lived in the neighborhood for 18 years. “I was totally insulted (by the $300 offer) as were many of my neighbors.

Sound Transit needs a minimum of 75 percent of the Surrey Downs homeowners to accept the offer as compensation for changing their covenants to move forward. The agency has not convinced enough residents to agree, despite many efforts to do so.

Beginning in 2015, the homeowners began receiving letters from Sound Transit, with a no-nonsense message: agree to change your covenants or we will pursue legal action.

In a letter dated December 30, 2015 to McElroy, Sound Transit wrote: “Our total offer…is $300. We will wait another few weeks for you to arrange for signature of the necessary documents to receive your payment. If you do not wish to sign…this is to serve notice that Sound Transit will exercise its right of eminent domain (to file a lawsuit).

“And that was very intimidating. They were also coming to our houses to try to get us to sign off. I received numerous calls on my unlisted phone number and I finally told them that if they didn’t stop I was going to get a restraining order for them to cease and desist from calling me,” said McElroy.

“(Sound Transit) is coming in and saying ‘either sign or we’re going to sue you,’” said Jim Dore, an attorney representing 38 residents who are refusing to sign. “A lot of people are taking the $300 because they’re scared or they don’t want the threat of a lawyer suing them. The other day we had two clients who are in their 80s say for their own personal health, they can’t involve themselves in litigation. They’re willing to just give up and give Sound Transit whatever they want. It’s completely wrong.”

In three years, Sound Transit’s offer has not changed. Dore and his co-counsel, Catherine Clark, said this is highly unusual. They specialize in eminent domain cases and said most governmental entities try to avoid trial and come to a compromise. But not Sound Transit.

“We are big light rail fans. I ride it all the time. I think it’s great. But the law requires that the people who are directly impacted by it receive just compensation. And Sound Transit resists that. (Instead they) fight to the bloody end, the bitter end. It’s old school,” said Clark.

A Sound Transit spokesperson denied the agency acts in a predatory or aggressive fashion. Public information officer Rachelle Cunningham said the $300 offer was arrived at after an appraisal.

“Based on the assessment on the appraisal that Sound Transit did, we believe it is a fair value for this property right (change),” said Cunningham. “I think when this is all said and one this is going to be very convenient for these folks to walk to the light rail stations, so I think there are pros and cons to the construction. Absolutely there will be a benefit.”

KING 5 has found that Sound Transit has a well funded legal team who come in when the agency decides litigation is the path forward. The firm of Miller, Nash, Graham and Dunn were hired under a five year contract in 2015. The value was $1 million. But through change orders, the contract amount has ballooned from $1 million to $11 million in the first three years.

The Surrey Downs residents said the money spent on attorneys would have been better used coming to a reasonable compromise.

“We’re now forced into a multiple week jury trial to have a jury decide it when it would be easy enough in theory to throw some amount to try to settle the case as opposed to spending it on the lawyers to try to fight it,” said Clark.

“We appreciate that this is difficult for folks living in Bellevue and across our region as we expand our system in all directions really,” said Cunningham.

Sound Transit said the vast majority of the time they are able to reach agreements with homeowners, and that filing lawsuits is unusual.

"Our best estimate is that about 80 percent of our acquisitions are accomplished through voluntary deals with owners," said Cunningham.

The trial is set to begin February 20. It is expected to last several weeks. A jury will decide the fair compensation owed the homeowners.