Air quality on the decline in Northwest even as emissions fall

New research shows air quality in the Northwest is getting worse even as it gets better around the country. And the lead scientist says wildfires are to blame. 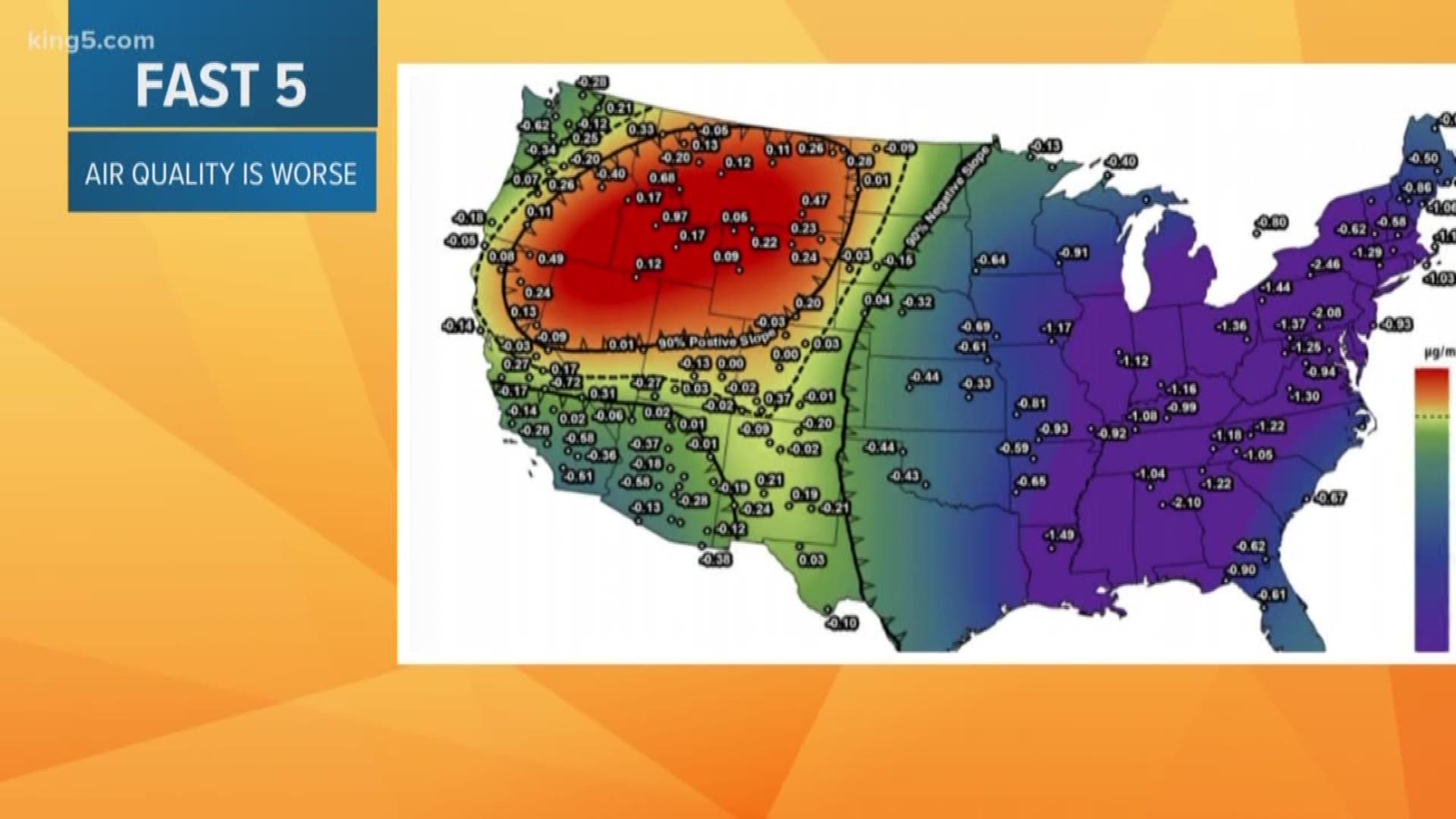 Research released this week out of the University of Washington Bothell shows that regional air quality in the Northwest is getting worse—even as it improves elsewhere around the country. The lead scientist said wildfires are to blame.

“Last year in Montana, we had some of the worst air quality ever measured in the United States from wildfires,” said Dan Jaffe, the lead author of the study who is also a professor of environmental chemistry at the University of Washington Bothell. “These wildfires are making a huge impact on specific days.”

Across the United States levels of fine particulate matter in the air have been falling over the past 30 years. Stricter emissions standards mean that cars and factories are burning fuels more efficiently, giving off fewer particles into the atmosphere. But here in the Northwest, these improvements are being offset by an increase in wildfires.

Combustion, whether of fossil fuels or brush grass, releases tiny particles into the air—what scientists call fine particulate matter or PM2.5. PM2.5 is one of the major pollutants tracked by experts who study air quality. Previous research has shown that particulate levels can double during high wildfire years.

The researchers found that most of the time, PM2.5 levels in the Northwest follow the national decrease. But there’s a caveat—the worst days are getting worse. Air quality on an average day has improved since the 1980s, but the number of days with bad air quality is on the rise.

Fine particulate matter’s tiny size is what makes it such a harmful pollutant.

The small particles “can get deeper into your lungs,” explained Beth Friedman, an atmospheric chemist with the Department of Ecology. “That can affect your [respiratory] system and leave you more susceptible to asthma, bronchitis, and other respiratory diseases.”

The Department of Ecology, along with the Environmental Protection Agency, maintains part of the monitoring network that Jaffe used in the research. They make air quality measurements by drawing air through a filter. By comparing the weight of the filter before and after collection, they can quantify the amount of particulate matter in the air.

In Washington, it’s generally the eastern side of the state that worries about wildfires. However, depending on the weather patterns, Western Washington can feel the effects of fires from as far away as Idaho and British Columbia—and it’s not immune to them itself, either.

Currently, the entire state of Washington is under moderate to extreme fire danger, according to the state Department of Natural Resources.

As for the trend in the Seattle area, Friedman thinks we’re in a “watch-and-wait period.” It’s hard to say if the particulate matter is getting worse or not because the air quality here is so weather-dependent.

What is clear to scientists, though, is that as temperatures rise, wildfires will increase in frequency. Previous research has pointed to human-driven climate change as responsible for nearly half of the wildfire area burned between 1984–2015.

Higher temperatures cause plants to dry out, creating more fuel to feed potential fires. Then all that’s needed is a spark—a bolt of lightning, a cigarette thrown from a car window, or an unwatched campfire.