1-on-1 with Gov. Inslee: Washington's coronavirus outlook and decision to close schools

In an exclusive interview with KING 5, Gov. Jay Inslee discusses keeping kids on remote learning, and when we could be gathering in large groups again. 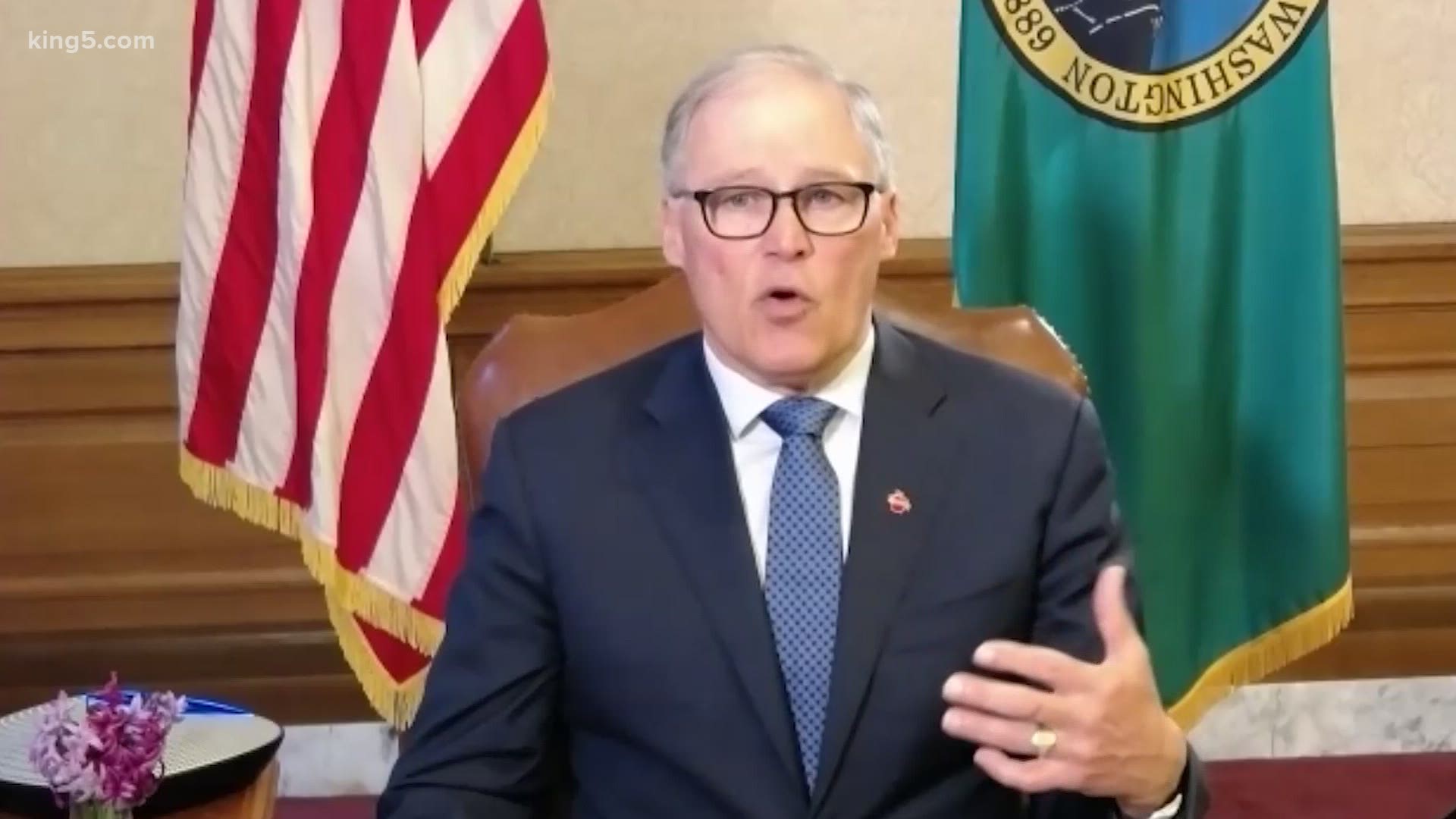 Those were just two of the topics covered in the wide-ranging interview with the Governor on Thursday about the coronavirus pandemic and the state's response.

On Wednesday, Inslee announced that the temporary field hospital at the CenturyLink Field Event Center would be dismantled and that Washington state would send ventilators to another state with greater need. Is that some sort of indication that the worst is over?

"When you do smart things in social distancing, and you act fairly early and you have a population like ours who are smart enough to do these things, you can bend the curve down, you can reduce the rates of fatality and we believe that we have done that," Gov. Inslee told KING 5.

Close to 9,700 people have tested positive for coronavirus in Washington state, including 446 confirmed deaths, according to the Department of Health. The trend line has not been as sharp as other states, but Inslee said "it would be deadly for a lot of people" to change behavior now.

RELATED: CenturyLink field hospital to be dismantled, sent to state with greater need

Gov. Inslee also said the state is not rejecting help and was asked specifically about testing for the virus. Washington state has only been able to test about 100,000 people. New York State has done more than three times that.

"We are not giving back a single swab for test kits and we're not giving back a single piece of personal protection equipment, because we still have a shortage of those things in the state of Washington," he said. "Our testing rate per thousand is in one of the top several states, even with this fact because no state really has adequate testing today, we all need it across the United States."

On Monday, Washington state also became the 14th state to cancel K-12 in-person learning at schools for the remainder of the year.

Gov. Inslee called it the right decision but said there was some consideration about altering the school calendar.

"It was important to let educators know that when they are making a commitment to remote learning, they need to make a commitment to remote learning because it's going to last for quite a while, you can't just sort of skate, take a vacation for a few weeks, think we're going to be back in the classroom," explained Inslee. "And we also just can't be confident. We gave some consideration for instance to, to not be in the classroom in May, but then come back in August. The problem with that is we can't be sure that we're going to come back in August, in the classroom."

RELATED: Washington schools shift to remote learning for the rest of the school year in coronavirus response

When asked how classrooms and other venues could be sanitized properly, Inslee said it would be part of any return order.

"We first prohibited large gatherings, including sport, large sporting events. Then we had to close the schools education on site. And then we had to have the stay home, stay healthy initiative and had to close a lot of businesses and restaurants. I think as we come out of this will probably come out in a sequential going the other direction. So that perhaps the last thing that we do is get together in giant sporting events," Inslee said.

Inslee said the state is hiring 200 people a week to try to handle the crush of unemployment claims, and acknowledged the frustration with the current system. The Governor said ESD should be "dividing up" the system, to allow for questions in one place and claims in another.

The Governor also tried to clarify his construction no work order, noting that he has given some discretion to other elected leaders, in each city or county.

RELATED: 16.8M Americans thrown out of work as economic toll of virus rises