8 spook-tacular plants to decorate your home 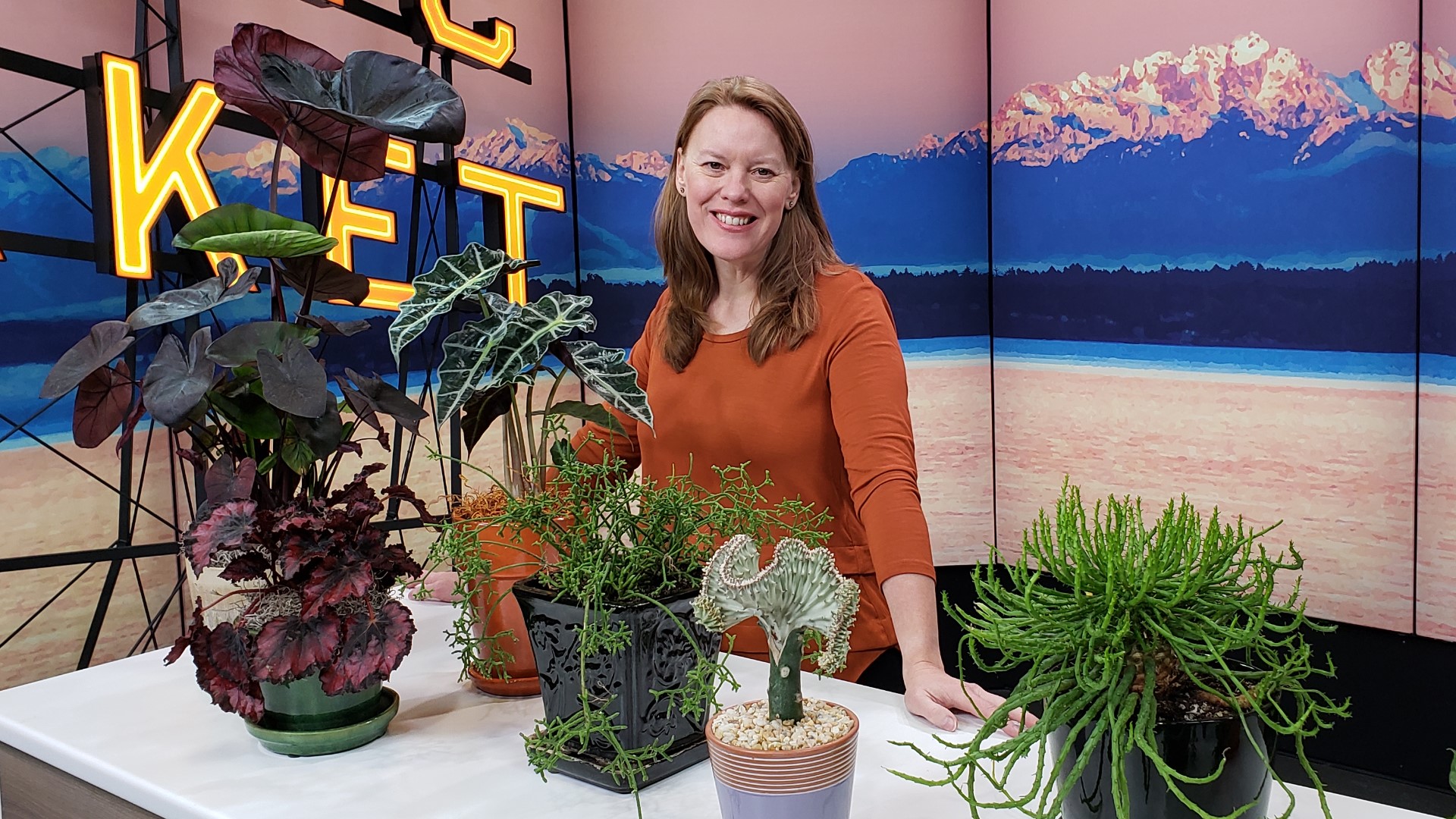 SEATTLE — Horticulturist and author Karen Hugg writes novels that are inspired by plants. She's says the world is full of creepy plants and she's sharing a few of her favorites with us!

String of Pearls (Senecio rowleyanus) is an otherworldly-looking plant native to southwest Africa. To store water and avoid evaporation, its little “leaves” are actually round balls, resembling peas on strings. This succulent evolved in shaded desert areas where it spreads horizontally and sends out roots via its trailing vines. When grown as a houseplant, it likes bright indirect light. As far as soil goes, it prefers a lighter mix, like for cacti. Water every few weeks. Watch your pets though because the peas are mildly poisonous. Otherwise, enjoy this strange and rare oddity.

Black Coral Elephant Ears (Colocasia esculenta ‘Black Coral’) seems like it would grow in a haunted swamp! If you’re one of those houseplant owners who often kills plants because you water too much, this is the plant for you. It likes its soil moist constantly and a bright filtered light. The dark mahogany leaves grow to four feet tall, adding an intimidating look to a home. Elephant Ears appreciate an occasional feeding of fertilizer to keep those narrow, heart-shaped leaves big and beautiful. But if it wilts in late November, don’t worry. It sometimes goes dormant for a few months. In February, the darkness will emerge again.

Rice Cactus (Rhipsalis cereuscula) The skinny stems of this splaying baby reminds me of delicate skeleton hands that might reach out and grab you at night when you’re sleeping. Its bony stems shoot out in all directions, making for a lovely hanging basket. Rice Cactus is an epiphyte, which means, it grows on another plant and takes moisture from the air. Because its native to South American jungles, it likes airy soil. I use half cactus, half regular soil mixed together with a bit of orchid bark thrown in. Don’t let this sweetie sit in heavy moist soil. It likes to ramble through the air!

Hindu Rope Plant (Hoya carnosa ‘Compacta’) is like a braided snake zig-zagging its way out of a hole. The curly leaves boast a waxy surface and the flowers bloom in curved corymbs of tiny pink flowers. Hindu Rope Plant needs indirect light, occasional water. This plant is also epiphytic and will amble up trees so it likes light soil, like an orchid mix. It’s a slow grower and might catch mealybugs if overwatered so let the soil dry out before watering. And if you give it a scaffold to climb on, it will reward with many arms of creepy crawliness.

Medusa’s Head (Euphorbia flanaganii) really opens her eyes and sends out trailing stems when she gets well established. Depending on conditions, that may take months, but once she does get happy, she creates bumpy snaky tendrils about a foot long. If she receives several hours of sunlight, she will produce a cluster of tiny yellow blooms. This euphorbia, unlike others, appreciates more frequent watering during the sunnier months. Mine thrives in a half-cactus, half regular potting mix. That and a bright window or grow light will keep this wild goddess thriving.

Polly Alocasia (Alocasia ‘Polly’) intimidates with its pointed, inky leaves that seem like they might poke you with a dangerous poison. Its white veins remind of a skeleton. It’s like a plant that came from a sinister swamp. Polly Alocasia grows up to two feet tall in bright indirect light. It likes some humidity and a regular potting mix that’s kept moist. Mine hasn’t died back in winter but it can go dormant. Keep the air warm and moist and this descendent of its rainforest ancestors will flourish.

Red Kiss Rex Begonia (Begonia rex-cultorum) This is the plant I imagine Dracula would grow. It feels dangerous and creepy with red markings and smoky black margins. And the name, ‘Red Kiss,’ sounds deadly. This swirly plant grows up to about one foot tall, likes indirect light, moist soil, and some humid air. If its edges get brown or crispy, that’s what’s lacking. In winter, the leaves may die back. A regular potting soil will help this bloody plant stay healthy.

Coral Cactus (Euphorbia lactea cristata) is a freaky wonder. Two euphorbias were grafted together to create this weird plant whose top looks like a smashed human brain. It’s even sometimes called a Frankenstein plant. The Coral Cactus likes bright indirect light. Plant it in a cactus mix soil and water only very infrequently. In winter, no more than once a month. If cut or broken, it also releases a sap that irritates the skin. So wear gloves!