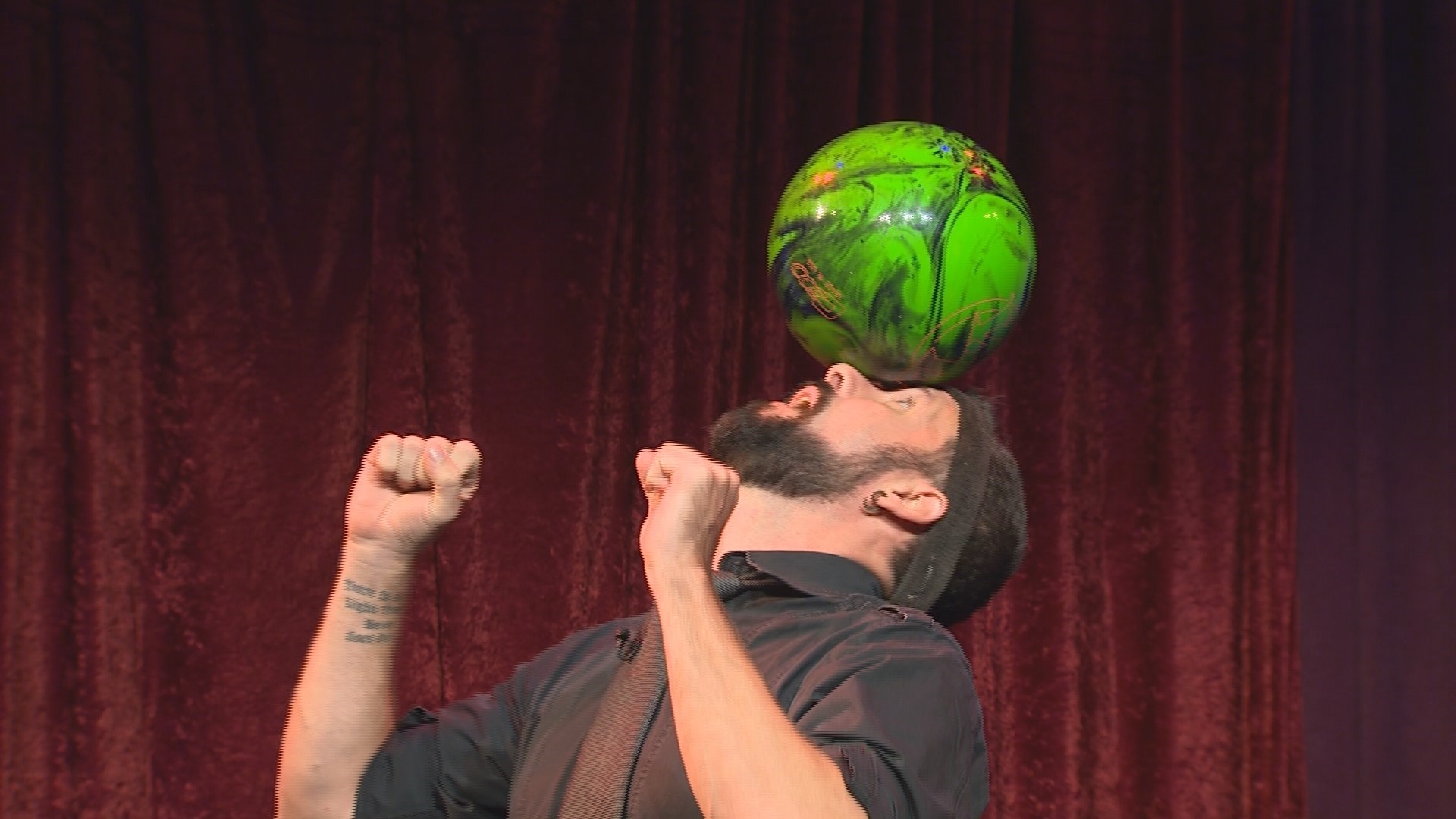 SEATTLE — The first time Matt Baker tried to catch a bowling ball on his face he got a concussion. "Eventually you just have to say all right, let's do it," says the Eugene, Oregon native.

The bowling ball stunt is just the beginning of what you'll see when Baker lights up the stage at Fremont's annual three-week vaudevillian celebration, The Moisture Festival."Some people come into the show having a tough day, week, year, life. And just to be able to give them the opportunity to forget about that for 45 or 50 minutes is a pretty great job to have," says Baker.

He says being a self-proclaimed "comic stuntman" is the ONLY job he's ever had. "All over the world! I've been doin' it full-time 17 years. Not bad for a high-school dropout!" he jokes.

His show includes tricks with the aforementioned bowling ball, spoons, balloons, hats...and, wait for it... a doll with knives attached. "Pretty much anything that can go wrong has gone wrong. I've cut myself with the knife-baby a couple times. And two concussions with the bowling ball. A couple broken fingers."

This all started for him when he ran off as a kid. "I got a job playin' hacky sack professionally in Europe when I was 17. So it required me to leave school. I use dropout loosely. I left school to go to Europe and do the thing I wanna do."

He got to see the world for a year and enjoy unlimited Snickers (his sponsor). "Came back to the States. And slowly realized there wasn't a huge future in hacky sack. So I learned to juggle. I sort of applied my coordination to some odd skills. Started creating weird tricks. Learned to tell jokes and then hit the road!"

That's where he's been ever since. But what does the most important audience member of all think? "My mom tells people I'm dead. No, I'm joking. It's funny 'cuz I'm the youngest in my family and it goes, corporate lawyer, pharmaceutical worker, professional ballroom dancer and then me. I was the first one to have a job."

And how does one actually work up to catching a bowling ball with one's face? "Practiced with a soccer ball first...just to get the motion of kicking it to your face. Then I practiced with the bowling ball, just throwing it and catching it."

He says he just had to go for it, hence the first concussion. He says it took him a year to figure out a headband was a good idea. He once finished a show with blood streaming down his face. "And then you're like oh I'm gonna do it again. And they're like please stop."

But Baker's not about to stop anytime soon. It is his JOB after all mom. "The world's a pretty serious place right now. I feel like showing people it's OK to be silly and you can still have fun. And there is a lot of like joy in the world."

See Matt Baker this Wednesday through Friday at Hale's Palladium in Fremont. The Moisture Festival runs through April 7th.