An Excessive Heat Warning is in effect for most of western Washington until Saturday evening. 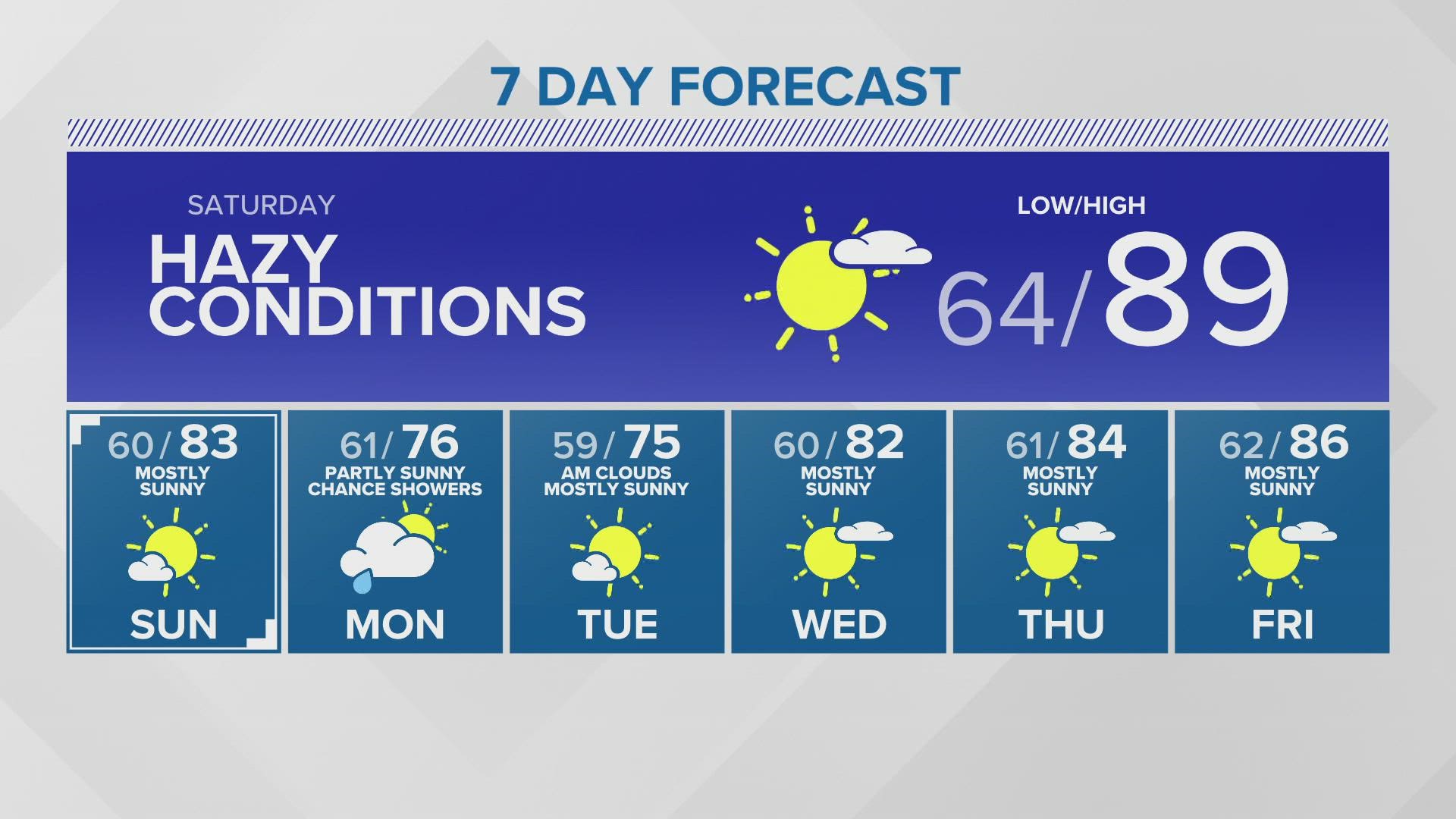 The heat and wildfire smoke will stick around in western Washington through Saturday.

Ocean air will move in Saturday and cool us 4-6 degrees in most places following two back-to-back hot days in Puget Sound. Temperatures Saturday are expected to be in the upper 80s to low 90s over most of the interior south of Everett.

Several clean air agencies around the Puget Sound region issued an Air Quality Alert until 7 p.m. Saturday due to the wildfire smoke from southern British Columbia and the Schneider Springs Fire, which is burning about 20 miles northwest of Naches, Washington.

As of Friday evening, the air quality ranged from “moderate” to “unhealthy" around the Puget Sound region, according to the Washington State Department of Ecology.

Increasing onshore winds will begin to clear the wildfire smoke out of western Washington, and it should be mostly gone by Sunday near the ground. Most of the Smoke blowing over western Washington will be coming from the west and southwest. It's smoke from California and Oregon wildfires that blew out over the Pacific. The prevailing winds Saturday will send that smoke our way. By the afternoon, a lot of that smoke will be above 5,000 feet and air quality at the ground will start to improve Saturday afternoon.

A stronger sea breeze Sunday will send the smoke well east of Western Washington. That is only if we don't get new wildfires. Any new wildfires could change our air quality depending on where a wildfire would happen.

The National Weather Service (NWS) issued an Excessive Heat Warning until Saturday evening for most of western Washington.

Several cities and counties across western Washington have opened cooling shelters to help residents cope with the heat (click here for a list of cooling centers).

The NWS warned that nighttime relief from the heat into Saturday morning would be poor east of Puget Sound to the Cascade foothills. The weather service said the extreme heat would “significantly increase the potential for heat-related illness.”

Still expecting gradual improvement in both heat and smoke. Heat wise, some areas should experience some relief tomorrow. But will take until Sun for all of W WA to feel that. The smoke is a little trickier, but the cold front moving through Sun night should certainly help! #wawx pic.twitter.com/sfpYZWVCUI

Outdoor cooking and heating appliances are also restricted other than certain manufactured gas and charcoal units.

Bellingham reached 100 degrees Thursday for the first time in its recorded weather history dating back to 1949. Its previous record was 99 set during this year's first heat wave in June. Prior to that, 96 degrees had been the hottest temperature on record, according to KING 5 meteorologist Rich Marriott.

Things will begin to cool down in western Washington for the start of next week.

The stronger push of marine air will cool us back to the upper 70s and low 80s by Sunday and Monday. There will be a chance for rain showers across western Washington Sunday and in the mountains, but it's not expected to amount to much.