Monday is expected to be the hottest day this week, and western Washington broke 90 degrees for the first time in 2020. Olympia hit 97 degrees. Puyallup hit 95. 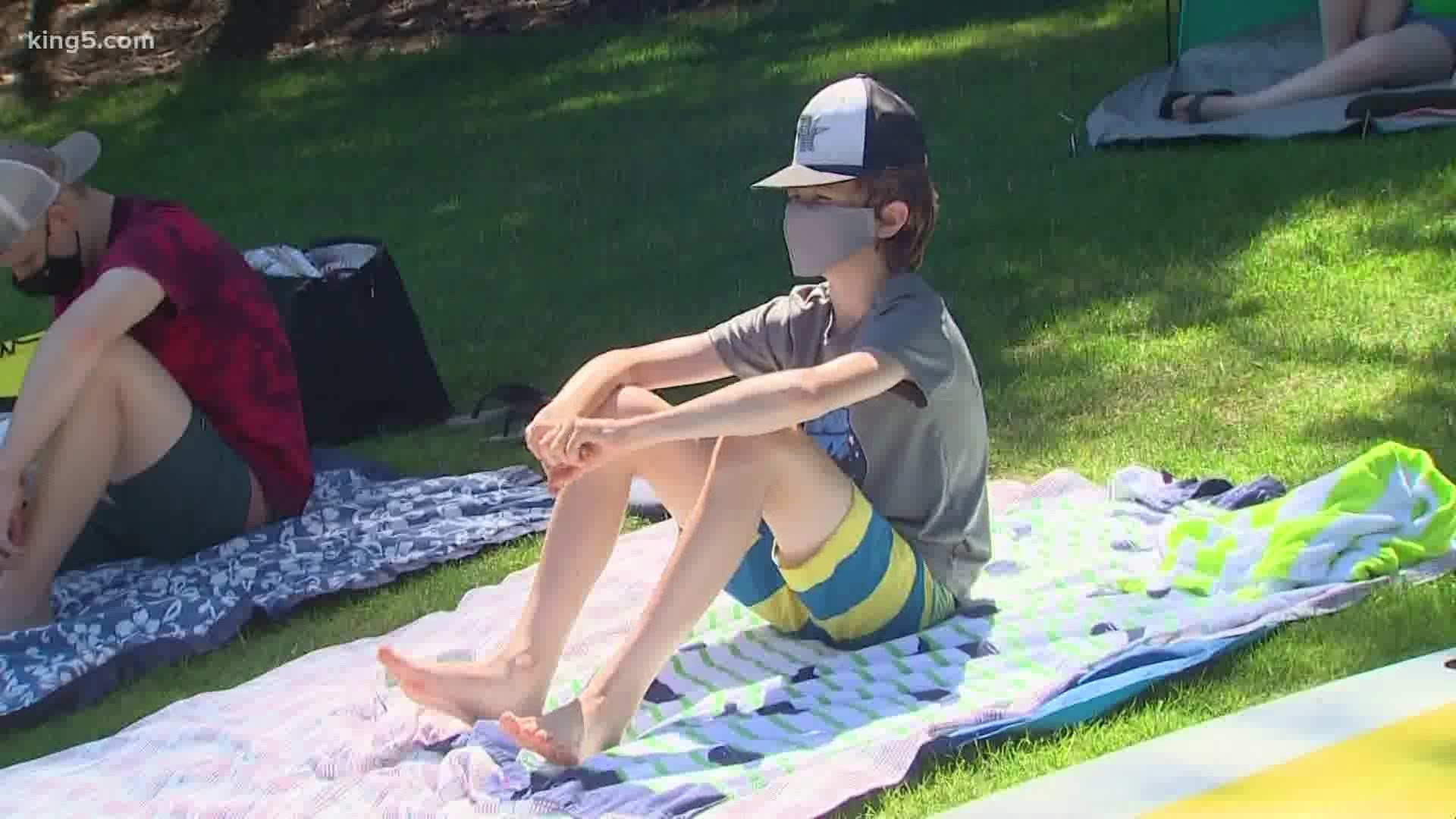 SEATTLE — Seattle broke 90 degrees for the first time in 2020 on Monday, with a high temperature of 94 degrees at Sea-Tac International Airport.

It ended a streak of 371 days without a 90-plus degree day in Seattle. The National Weather Service reported that local temperatures could possibly hit 95 degrees Monday.

SeaTac Airport officially has hit 94°F today. The record for the date is 95°F in 1998. It's not impossible to warm up a little more, but it'll be hard. 94°F will likely be the high today. #wawx

The National Weather Service issued a heat advisory for parts of the Puget Sound region from 9 a.m. until 8 p.m. Monday. The heat advisory will be in effect in the areas near Tacoma, the lower Chehalis Valley, Seattle, and the Southwest Interior, the NWS said.

RELATED: Tips and hacks for staying cool during a Pacific Northwest heat wave

A red flag warning was also in effect for the western slopes of the central Cascades Monday from 11 a.m. until 8 p.m. due to the hot, dry conditions.

Brace yourself...it's going to be a hot one! In fact, many of you will be under a Heat Advisory today. Stay cool, stay hydrated! #k5summer #k5weather #wawx pic.twitter.com/6esD6sq9wl

A phase one burn ban was issued Monday for unincorporated areas of King County due to potential wildfire conditions. All outdoor burning is prohibited, except for recreational fires in established fire pits at approved campgrounds, or on private property with permission. The burn ban will remain in effect until it is lifted by the fire marshal.

Onshore winds will gradually increase Tuesday and Wednesday cooling temperatures back to the low to mid-80s.

The heat arrives after a chilly start to the summer. As of Friday, Seattle has had 14 days of below normal temperatures and seven days of above-normal temps in July. The average high temperature the first week of the month was 69.4 degrees, which is the coldest start to July since 2002.

At this time of year, the high temperature in Seattle is typically 77 degrees.

If you plan to hit the beach to cool off during the hot weather, officials warn the water is still cold, and people should wear life jackets if they recreate on the river. Puget Sound is about 52-56 degrees, and alpine lakes and rivers are even colder, according to the National Weather Service.

As of Thursday, there have been nine drownings in King County rivers this year, a pace that is double the last two years combined, according to the King County Department of Natural Resources and Parks.

Unlike most hot summer days, there were no cooling centers, spray-grounds or movie theaters for Thurston County residents to escape to Monday.

As the temperature at the Olympia Airport pushed 100 degrees, crowds flocked to Lacey’s Long Lake Park. The public park has a boat launch and swimming area that remains open.

While the priority was clearly to cool off, Meegan Cronk, a mother of three from Olympia, made sure to keep her family safely distanced from other picnickers and swimmers’ beach towels.

"We don't want to stay home on a day like today,” said Cronk. “But it's challenging to find a place that's both distant, near water and comfortable."

Cronk told her children they had to wear masks unless they were swimming.

Ashley Miller, a mother from Yelm, said she’s made sure her family wears masks when they go to the grocery store, but she felt safe not making them wear a mask at the park.

“When we're outdoors, and we’re away from others like this, and we’re swimming, and it's 90 degrees? We're not going to wear a mask,” said Miller.