Several cars were washed away in floodwaters and hundreds of Whatcom County residents are displaced. 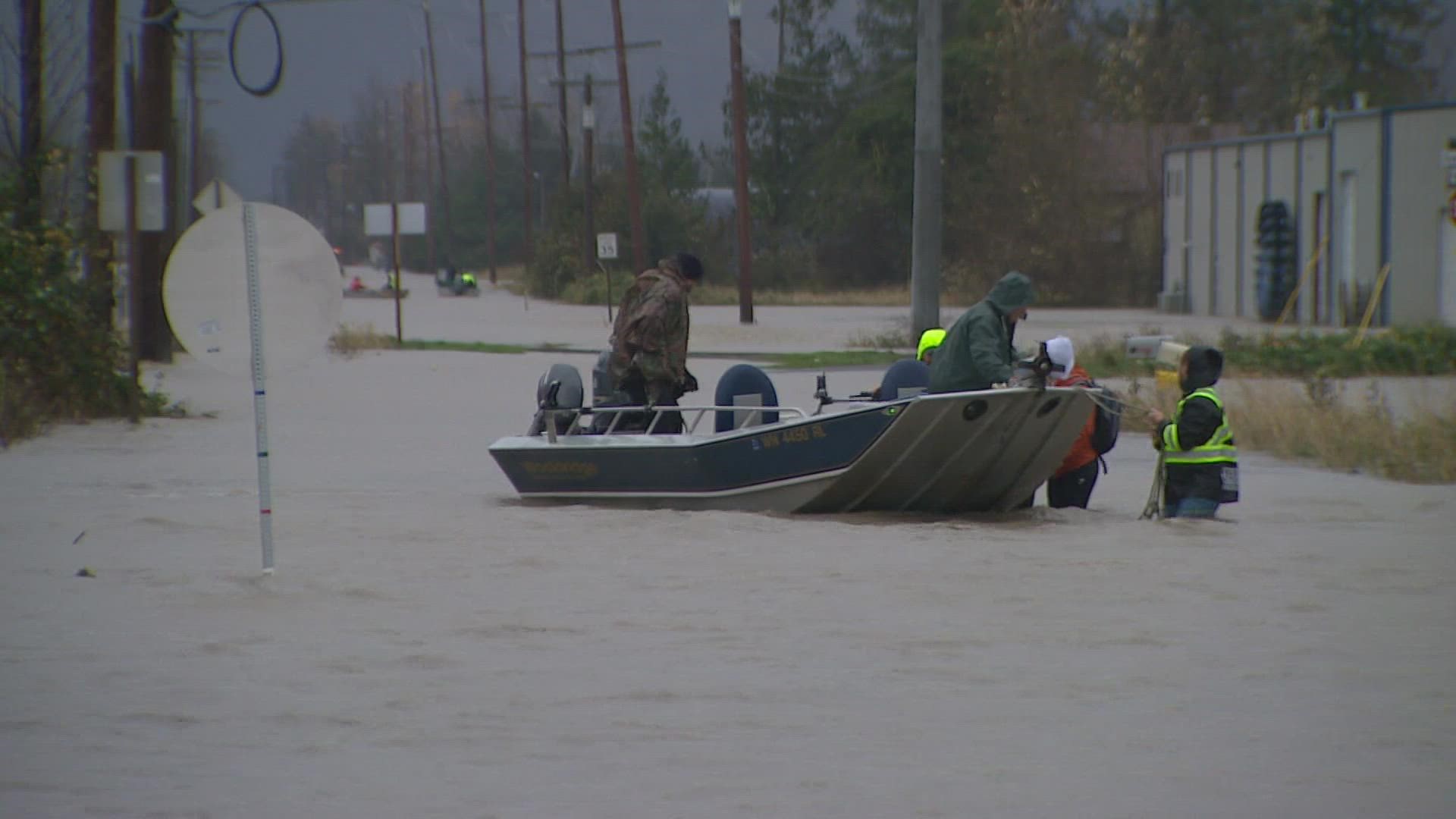 SUMAS, Wash. — Emergency officials in Whatcom County called it the worst flooding since 1990, and more is still to come. Officials estimate more than 500 people have been displaced from their homes, especially in north Whatcom County.

More than half of the displaced residents moved to shelters that were quickly established Monday at Everson Elementary School, Nooksack Elementary School and North County Christ the King Church in Lynden.

The small town of Sumas near the Canadian Border was inundated with floodwaters Monday. The Nooksack River spilled over its banks Monday morning and washed out several roads.

Residents were advised to remain in their homes. City and county rescue crews were inundated with calls for help, so neighbors used fishing boats to bring people to safety.

As of Monday evening, there were no reports of serious injuries in Whatcom County.

An atmospheric river brought heavy rain and wind to western Washington on Sunday night, prompting Flood Warnings on a dozen rivers. Bellingham received about 3.5 inches of rain over a 24-hour period from Sunday to Monday, according to the National Weather Service (NWS).

The Nooksack River at Everson crested Monday afternoon, according to the NWS.

"They're in a bad way out there," said neighbor Jordan Beld. "There's a lot of water and it's only getting higher."

Beld said he has family stranded in the flood zone and was desperate to get them to safety as the waters continued to rise.

"A couple hours ago, they all thought they were okay. No water had shown up, but now it's coming full force," Beld said. "I've heard it's up to 4 or 5 feet deep in the neighborhoods. People got a foot in their house."

Sarah Ivanhoe and her 15-year-old son left their home when water started flooding inside.

They live about 2 miles away from where rescue volunteers gathered at Halverstick Road with their boats.

The pair had to wade through freezing cold water until someone floated by to pick them up.

"There was nothing in our house and then in less than 30 minutes, it was up to our ankles. Outside it was up to my waist in some spots," said Sarah's son, Thomas Austin. "I was terrified."

"It's bad. It's pretty deep. It's fast. It's dirty and it's cold," added soaked and shivering Sarah.

City Hall was one of the buildings that flooded.

RELATED: I-5 closed overnight south of Bellingham due to flooding, landslides

Multiple vehicles washed off the road, and the city said people are waiting to be rescued. The city urged people not to drive around "road closed" signs.

It takes just 12 inches of water to sweep away a vehicle, and the road may have collapsed under the water, according to the NWS.

“These bad decisions put out first responders at risk and take them away from other life saving duties (sic),” the city said in a Facebook post.

Residents are asked to conserve water until the floodwaters recede as access to the water springs has been hindered. 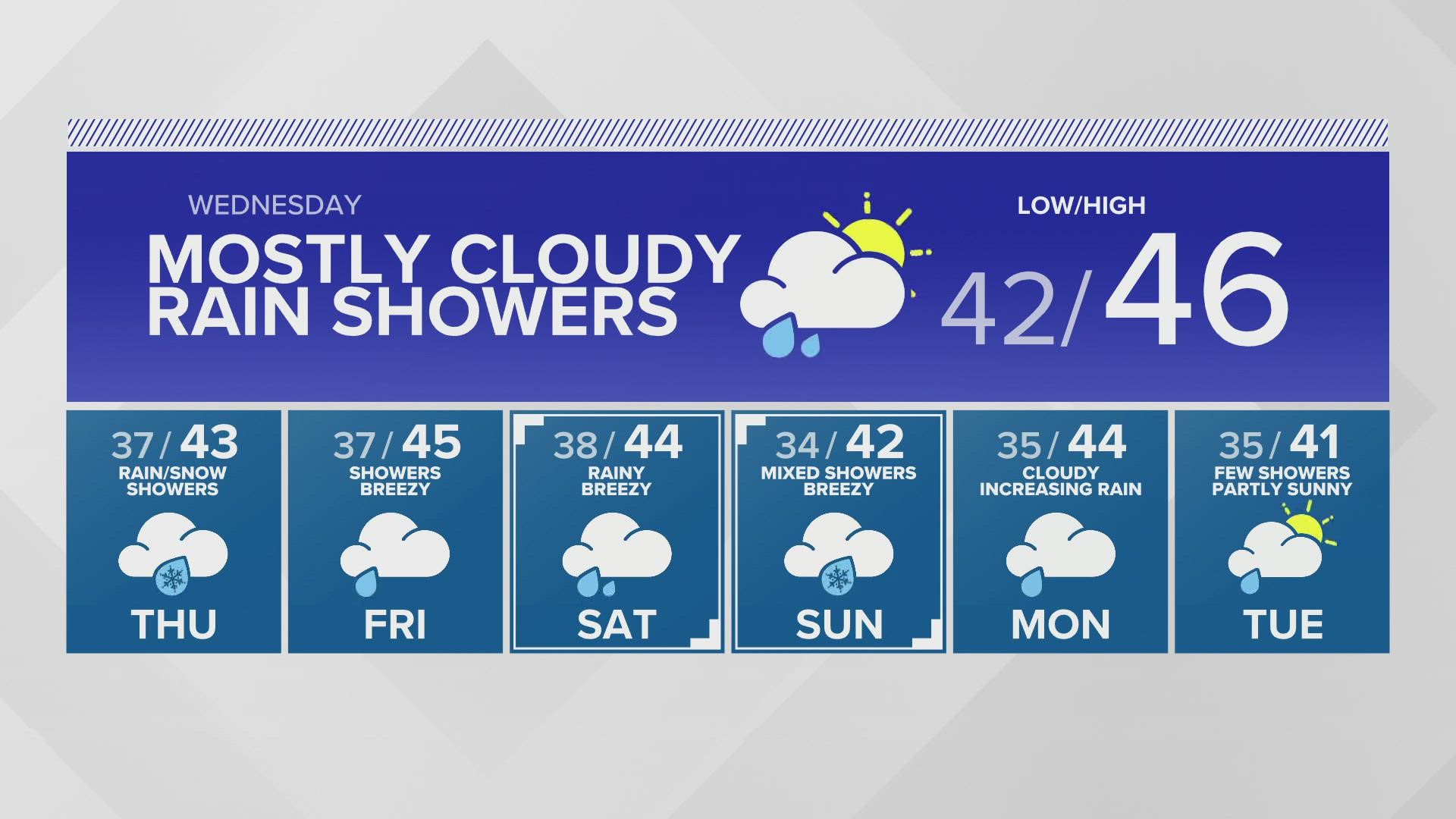