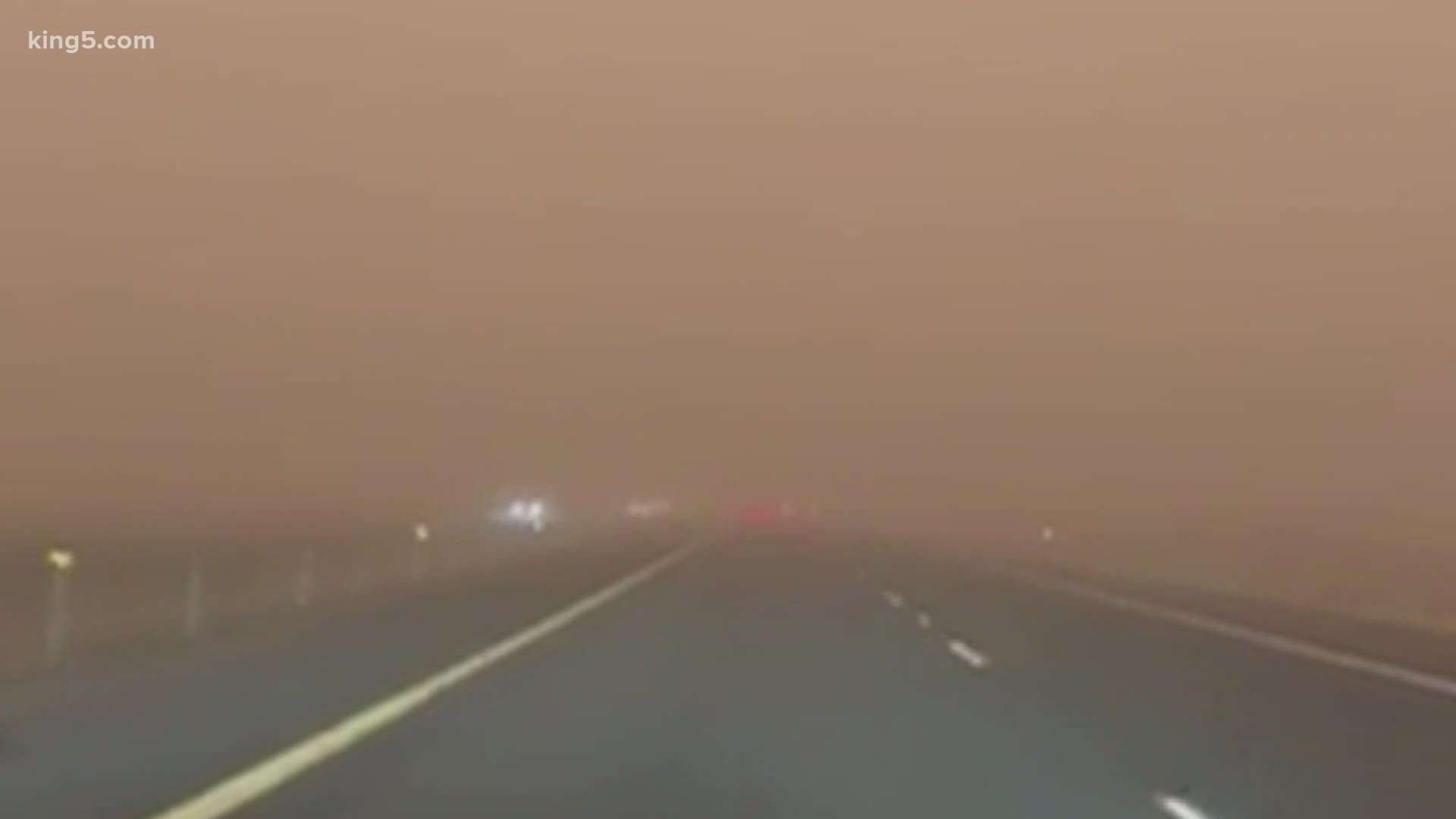 On Monday night, a brush fire closed both directions of SR 167 at SR 410 near Sumner. Trooper Ryan Burke said power lines came down, causing scattered outages in the area. Detours were put in place, according the Washington State Department of Transportation.

The roadway was at least partially open by 3 a.m. Tuesday.

SR-167 @ SR-410 currently closed in both directions. Fire at 167 and power lines down at 410. Crews on scene and more on the way. Sumner PD is handling evacuations where necessary. @wsdot_tacoma
Avoid the area please!! pic.twitter.com/4fpROGLEAG

Much of western Washington is under a Red Flag Warning because of dry conditions, rising temperatures and strong winds out of the east. Fire danger is relatively high.

The National Weather Service advises closing your windows as more smoke pushes into the region.

The Red Flag Warning includes the northeast and southeast Puget Sound lowlands - below 1,500 feet, along with the western slopes of the north and central Cascades and east portion of the Olympics.

The Red Flag Warning is currently in effect until 11 p.m. Thursday.

Clark is especially concerned since he said all of the fires that started across Washington were human-caused. "I'm sick, the amount of new fires today is unreal," Clark tweeted. "Early estimates figure 288K acres burned today across the state. Numerous homes and property destroyed, 30K+ without power. Every one of these was 100% human-caused and therefore 100% preventable."

I'm sick, the amount of new fires today is unreal. Early estimates figure 288K acres burned today across the state. Numerous homes and property destroyed, 30K+ without power. Every one of these was 100% human-caused and therefore 100% preventable. #WaWILDFIRE #wawx pic.twitter.com/RJDFXpoJyE

According to the National Weather Service (NWS), "A Red Flag Warning means warm temperatures, very low humidities, and stronger winds are expected to combine to produce an increased risk of fire danger."

Any fires that develop in the Pacific Northwest have the potential to spread quickly. Outdoor burning is not recommended anywhere in the state.

Winds, especially strong Monday night through Tuesday afternoon, could reach up to 25 mph, with gusts up to 45 mph, according to NWS.

Easterly winds will increase across the Cascade gaps this afternoon, peaking tonight through Tuesday morning. Hot, dry, and windy conditions will combine to create critical fire conditions across much of the region. Make sure to avoid any activity that could create a spark! #wawx pic.twitter.com/o5wZGxyhc6