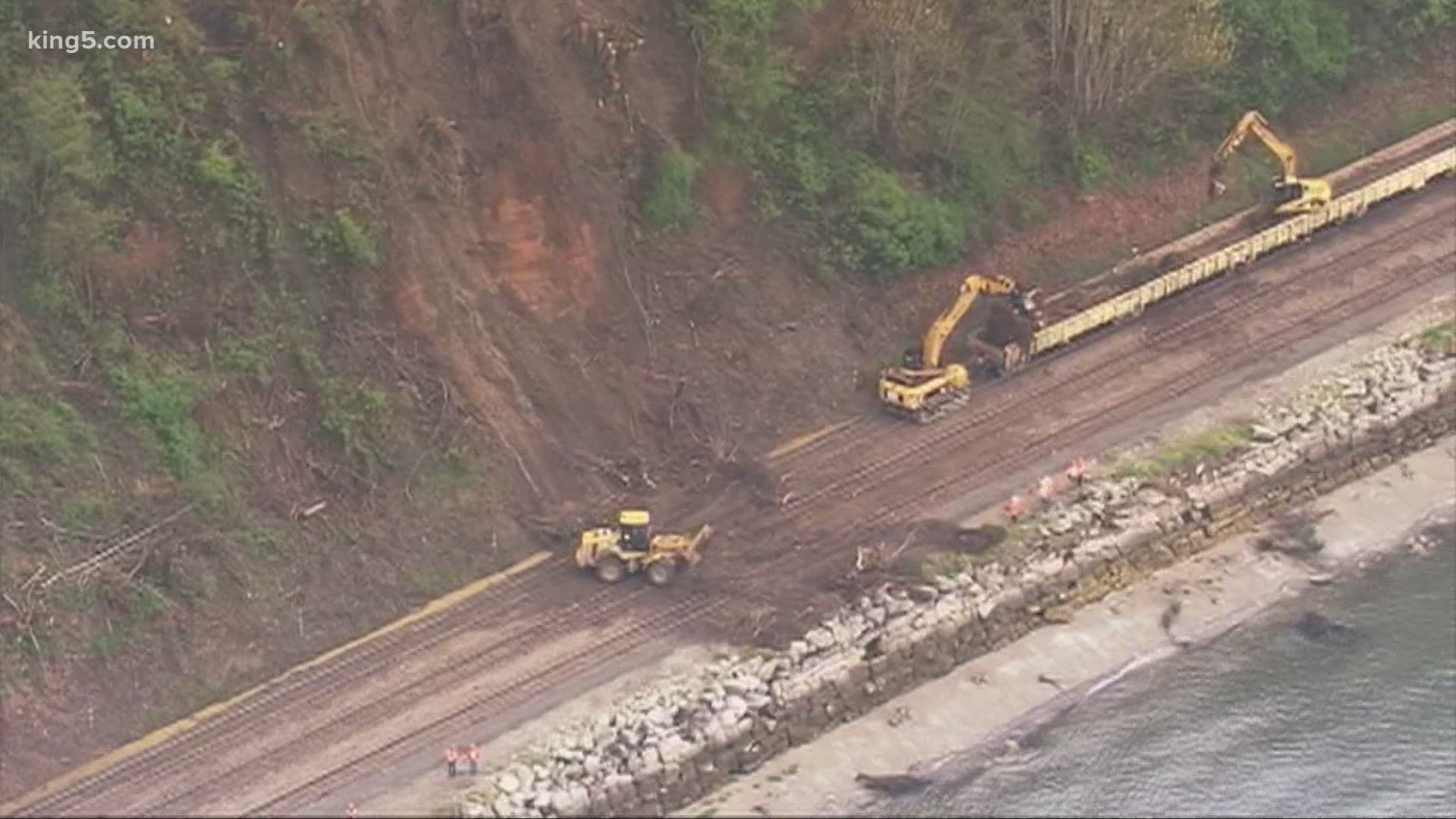 EDMONDS, Wash. — Heavy rain across western Washington this week has increased the threat of landslides in the region. Transportation officials are discussing the ongoing efforts to prevent landslides when the ground gets saturated.

Two new landslides on the railroad tracks between Seattle and Everett have canceled Sounder commuter trains at least through Wednesday. One occurred close to Mukilteo during record downpours Saturday night, and the other happened Monday near Richmond Beach.

Rules on the Burlington Northern Santa Fe (BNSF) Railway bar passenger travel for 48 hours after a landslide, however, freight trains are allowed to pass once the tracks have cleared.

The slides happened at two locations that have seen slides before, one of the last three of 15 locations where mitigation efforts are targeted over the next two years, according the Washington State Department of Transportation's (WSDOT) rail, freight and port's division.

Of those 15 identified locations, 12 have been fully or partially mitigated so far at the cost of $36 million in state funding with a 50% federal match to protect passenger trains, including Amtrak.

"Of those mitigation measures we’ve implemented out there, once they’ve been in place we have not seen those 48-hour moratoriums. They've been 100% effective,” said Operations and Capital Program Manager Jason Biggs, who is overseeing the mitigation projects for WSDOT.

Biggs said he expects the legislature to continue funding the remaining three projects, including the two locations that let loose in the current round of storms. The costs for the remaining projects is estimated at around $3 million a year.

One of the most effective measures for preventing landslides is the construction of “catchment walls,” where beams are driven twenty feet into the ground and support concrete barriers that hold mud, rocks, trees and other slide debris back from the tracks.

Other efforts have involved changing the angle of slopes and covering them with rocks. Tracks are also protected with wires, slide fences that are electrified with small amounts of electricity. If falling debris breaks the wires, that can trigger signals stopping trains until inspectors can make it out to determine what happened. The mitigation program also involves public education for homeowners who live on bluffs above the tracks to better manage drainage and keep the slopes drier.

"Five years ago and before, we were having to cancel hundreds of days of service because of numerous landslides throughout the rainy season," said Sound Transit spokesman Scott Thompson.

Now, that number of canceled trips is a few dozen, or less in some years. Due to the pandemic, Sounder service on the north line where these landslides occurred is already cut in half because the virus has dramatically cut ridership.

With more heavy rain in the forecast this week, the National Weather Service is continuing to warn of increased landslide danger since the soil has already been saturated from recent storms.