A massive warmer-than-normal pool of water that’s formed in the Pacific Ocean off the Washington coast may already be wreaking havoc with our weather. 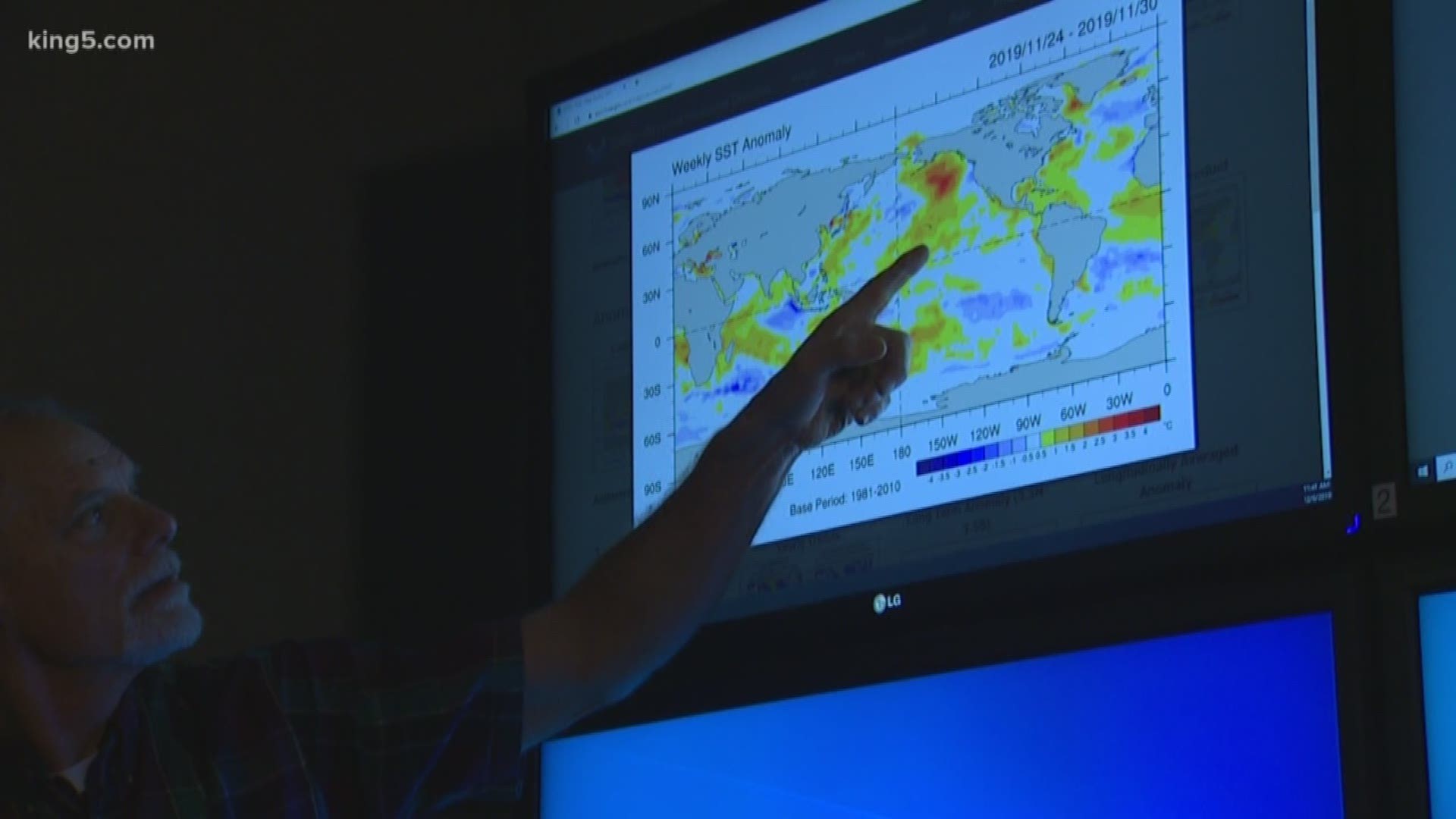 WASHINGTON — Whether you want to call it “Blob 2.0"  or more scientifically put, a marine heat wave, is back on the West Coast.

A massive warmer-than-normal pool of water that’s formed in the Pacific Ocean off the Washington coast and up into the Gulf of Alaska may already be wreaking havoc with our weather.

“This predisposes us to weather on the warmer side than usual,” said Washington state climatologist Nick Bond, with the University of Washington.

For those who think a few degrees won't make an impact, Blob 1.0 is blamed for record wildfire seasons, super low snowpack over the winter, and droughts in 2014-2015.

The first Pacific Blob began in late 2013 and eventually grew to flank the entire west coast before fading away.

Bond said he wasn’t expecting a repeat so soon. "The original blob was so unusual, and stood above the usually kind of variations in the climate and ocean temperatures that we thought 'wow, this is going to be something we won’t see for quite a while.' And here that we’re talking about it right now, is quite a surprise.”

Blob 2 was first noticed in early September and has wobbled around the northeastern Pacific since then. Right now, it spans an area roughly a 1,000 to 2,000 miles west of Washington.

Although the technologies to track sea surface temperatures are far more advanced from where they were even a few decades ago, Bond said there was likely a Blob in the late 1950s, and a somewhat similar ocean warming phenomenon in the late 1990s.

Bond specializes in how the ocean water interacts with the air that passes over it and to an extent, he expects the prevailing winds moving from west to east will become warmer than normal as a result.

As Washington has moved through its fall and soon into winter, there have been some notable milestones. November, normally our wettest month, was incredibly dry. And the snowpack which is closely tracked in the mountains is as low as 5 percent of normal in the central Cascades for this time of year. Everywhere in the state is running well below normal.

Is there a direct correlation between the marine heatwave and our weather? Bond puts it in the terms of a gambler: "I like to put it in the casino analogy, that having this warm water stacks the deck toward warmer than normal air temperatures.”

Bond said in many ways, these marine heat waves are their own phenomenon, but their intensity is boosted to a limited degree by a broader rise in sea surface temperatures. What has him really curious is why this round is starting just six years after the last one.

The fact that they can take years to play out is not a mystery, “The ocean has a lot of thermal inertia. It is very slow to warm or cool.”

As for where the current snow pack stands, Bond isn’t ready to write the winter off yet.

“If we have another month, month and one half without much snow it’s really hard to make up the deficit at that point. And at that point you have to give people notice that there may be water restrictions," Bond said.