'Are you beeping?' Avalanche program aims to save lives in the Cascades

A volunteer ski patroller started a project to help save lives in the Cascade mountains. 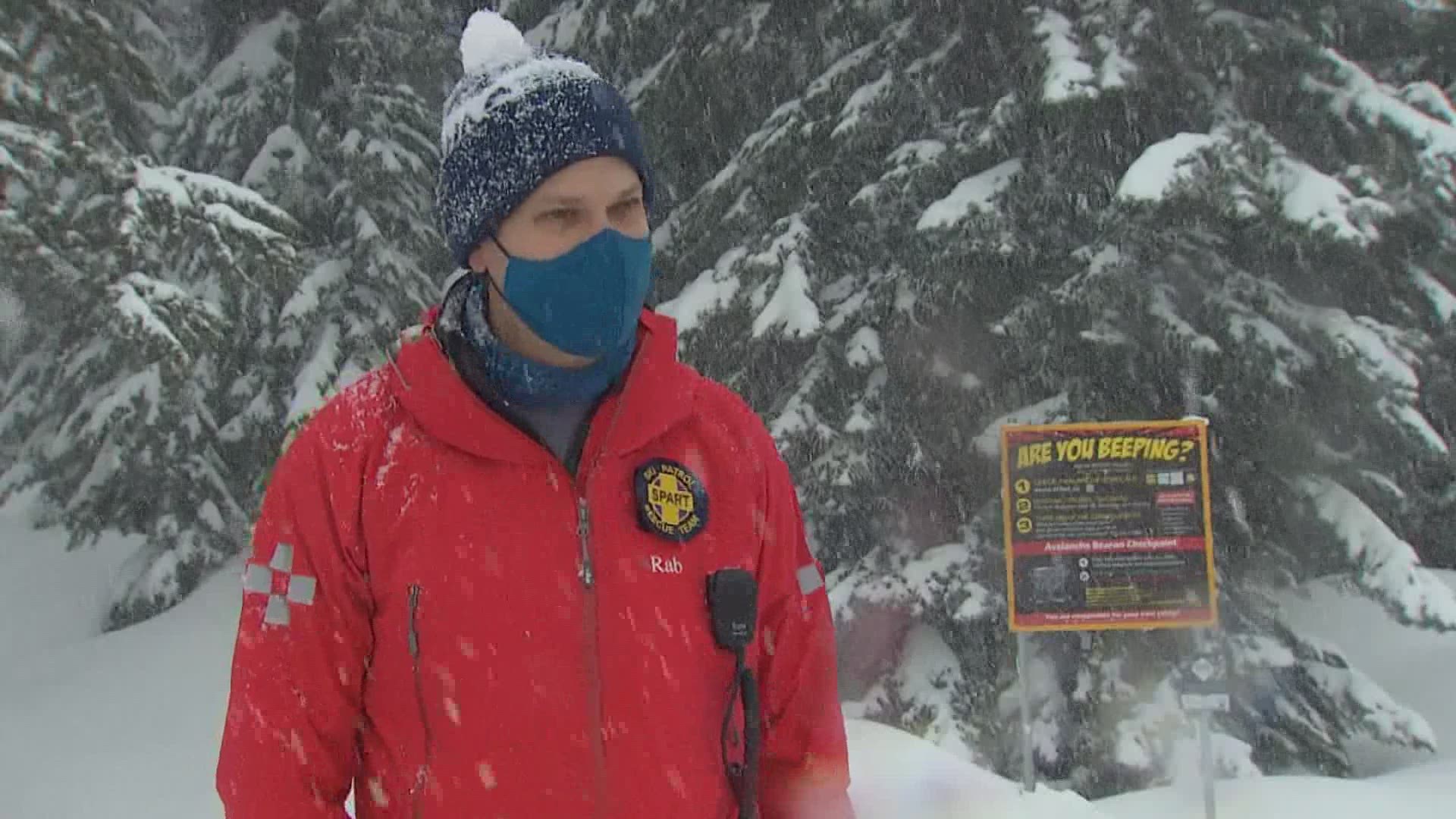 SNOQUALMIE PASS, Wash. — It has been an especially snowy February in the mountains of western Washington, with feet of snow falling in a matter of days. Significant storm systems have forced closures at the passes and raised avalanche danger for backcountry users.

On Friday, Snoqualmie Pass got another foot of snow overnight, bringing the season total recorded by the Washington State Department of Transportation (WSDOT) to 396 inches, or 33 feet. The evidence of that is clear, with mounds of snow reaching the top of light poles, and walls of ice taller than semi-trailers.

Stevens Pass closed for a period Friday after avalanche debris covered US 2. WSDOT shared this image of an avalanche that closed a portion of US 20/North Cascades Highway.

The Northwest Avalanche Center also says danger across virtually all of the Cascades is high, and travel in avalanche terrain should be avoided.

So it's no doubt that avalanches are on Scott Waller’s mind. He’s a volunteer ski patroller with King County Search and Rescue and started a project to improve avalanche safety a decade ago.

Waller's project “Are You Beeping?” installs avalanche beacon test sites and signage at resort gates and forest trailheads before users enter risky terrain. It's a chance for explorers to turn on their avalanche beacons. The signs also include information about avoiding risky terrain and unstable snow conditions.

Waller sees it as a friendly reminder to be prepared.

“It’s amazing how people will have the intentions of putting on their avalanche transceiver, putting it on and turning it on before they go into risky areas, then they forget it in their car,” he said.

Some ski resorts have bought the signs, which he makes at cost, and many are funded by non-profit donations.

On Friday, he installed a new one on the Pacific Crest Trail near the Alpental exit off I-90, a popular snowshoeing and touring destination. It was funded by Ski Patrol Rescue Team (SPART), a volunteer crew that works with King County Search and Rescue. Two more of the check stations will be installed at Alpental's backcountry gates this weekend.

It’s tough to know if the signs have saved lives, Waller said, but that is the goal.

“That’s the hope,” he said. “That’s the hope. It’s hard to measure that, or quantify it, but know I’ve sat at trailheads putting these up all over and it’s amazing how someone will show up, they’re a backcountry skier, and they forgot to turn it on. Yeah, it happens. Just reminding them.”

He stressed those reminders have become especially important in the time of COVID-19 and social distancing, as more people are hitting the trails, including those with less experience.

And a reminder: many popular summer trails are hazardous in the winter, so check conditions, and educate yourself on avalanche and weather hazards.