4.6 earthquake near Monroe felt as far away as Olympia, Wenatchee

It was followed by a series of aftershocks, including one that was a magnitude 3.5. 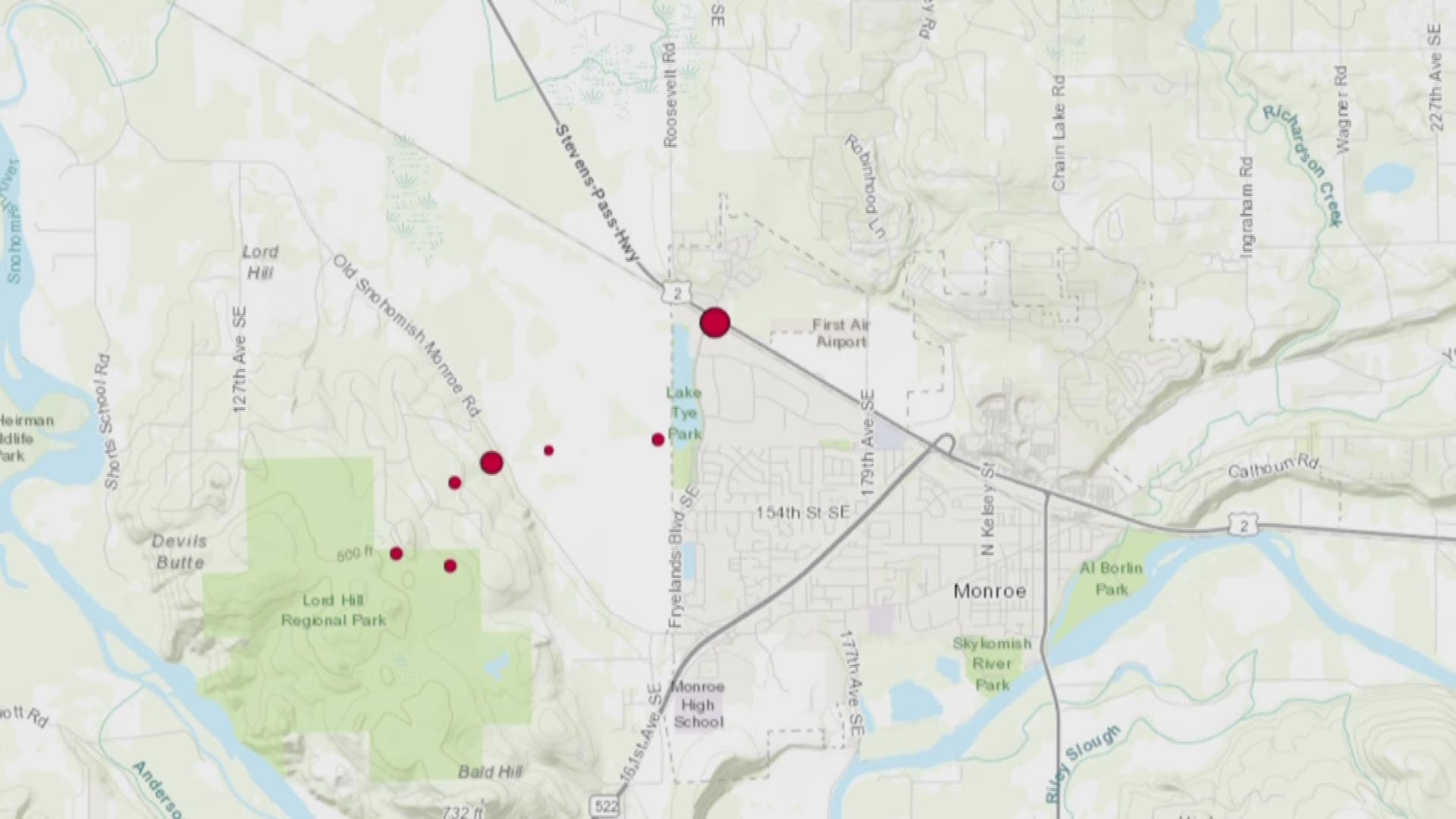 SEATTLE — A magnitude 4.6 earthquake hit near Monroe Friday morning, with the shaking felt by thousands of people.

The U.S. Geological Survey said the temblor struck at 2:51 a.m in the Three Lakes area, which is about eight miles north of Monroe. It was about 13.5 miles deep.

The earthquake was followed by a series of at least a dozen aftershocks, including a 3.5 earthquake two minutes after the initial quake. That aftershock was nearly 19 miles underground. Here's the timeline, according to USGS: 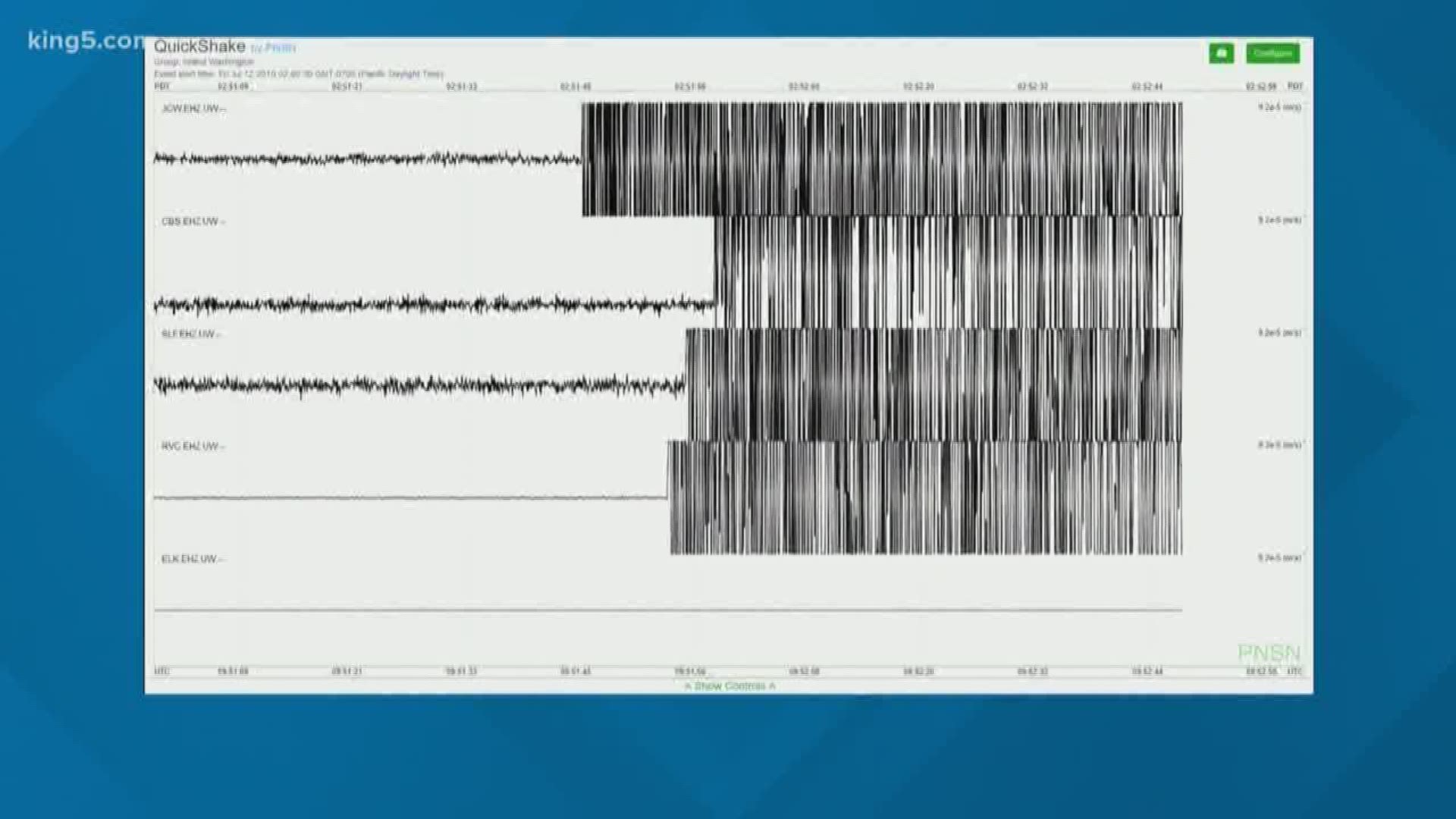 More than 11,700 people responded to a USGS survey saying that they felt shaking as of Friday at 10 a.m. Reports of shaking came from as far north as Vancouver, British Columbia and as far south as Olympia.

Shake maps from the Pacific Northwest Seismic Network shows which regions saw shaking during the magnitude 4.6 and 3.5 earthquakes and how severe the shaking was. A map of the 4.6 earthquake shows the shaking was moderate in the Monroe area, although the entire Puget Sound region saw light or weak shaking. The 3.5 earthquake was less intense, but still produced weak shaking throughout the Puget Sound region.

1 / 4
PNSN
A magnitude 4.6 earthquake on July 12, 2019 produced moderate shaking near Monroe and light to weak shaking throughout the Puget Sound region.

The depth of the 4.6 earthquake – 24.3 kilometers or about 13.5 miles – is important, because it helps scientists determine where the fault line is and what's to come. This earthquake wasn't shallow, but it also wasn't as deep as other large earthquakes the region has experienced. In 2001, the Nisqually earthquake was 59 kilometers (37 miles) underground, reaching down to the Benioff Zone where the oceanic plate starts to bend.

Friday morning's earthquake happened in the North American crust. Its depth means that the epicenter didn't feel the shaking as violently as it would have if the earthquake was shallower. However, the formation of the rock at that depth allows the energy to travel to the surface without a lot of dissipation and travel much further, according to Bill Steele, Pacific Northwest Seismic Network director of outreach and information services. That explains why people as far away as Vancouver felt shaking.

Scientists do not believe the earthquake originated from the South Whidbey Fault zone, which is the largest nearby fault and runs southeast from the Strait of Juan de Fuca to the Cascade foothills, south of Monroe.

“It behaves differently than the earthquake that we had out here,” said Steele.

At this point Steele said it looks like the quake originated from a cluster of faults running north-south from Duvall. That's the same area where a magnitude 5.4 earthquake caused millions in damage in 1997. However, Steele said that quake was shallower and stronger than Friday's.

The fault moved vertically. If a similar style of quake occurs on the Seattle fault under Puget Sound it could also produce a tsunami.

The recent magnitude 7.1 in California was roughly 300 times stronger than this Monroe magnitude 4.6. Scientists believe shallow faults in Washington are capable of producing up to a magnitude 7. 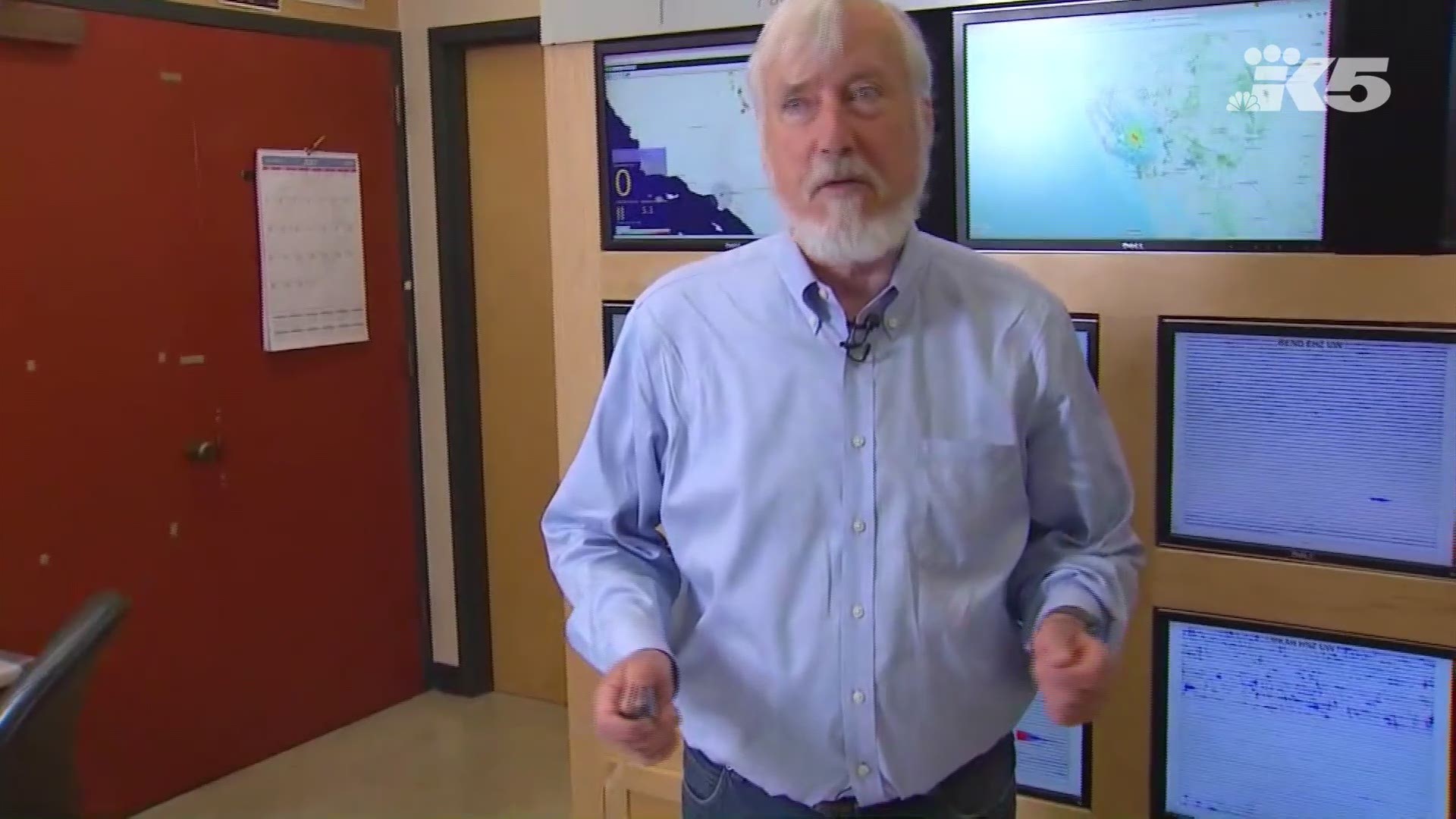 Over the next 24 hours the Puget Sound region could see more aftershocks. Steele said with a seismic event 13.5 miles deep the aftershocks typically die off sooner than if they're near the surface. However, if there's enough strain built into the region and conditions are just right, a larger earthquake could be triggered.

The Snohomish County Sheriff's Office says it hasn't received any reports of injuries.

Law enforcement haven't reported any damage from the earthquake, although several KING 5 viewers have documented damage.

"Sounded like an explosion in the living room," Yepez-Rice wrote in a Facebook message. "Then there was a lull and then the house started to shake. I tried to get out of bed and had to hold onto the bed and dresser. The rocking was so strong I couldn't walk and my perfume bottles slid off the dresser."

Credit: Joy Yepez-Rice
Two cracks formed in the foundation of Joy Yepez-Rice's home on Lake Beecher near Cathcart after a 4.6 magnitude earthquake struck near Monroe on July 12, 2019.

Crews from the Washington State Department of Transportation inspected bridges in the area Friday morning, but had no reports of damage.

Others reported feeling the quake, although they said there wasn't any damage or even anything out of place in their homes.

Alisha Skoglund of Monroe was getting up to get ready for work when the earthquake struck. Skoglund said it was her first earthquake, and at first she wasn't sure if it was her dad waking her up or if it was a quake.

"A little shaken from it," she said.

Kim Sawyer of Monroe was on the top floor of her building when the shaking started.

"It seemed like it lasted a long time," Sawyer said. "It didn’t feel like it was going to stop."

The earthquake also sparked some residents to think about preparedness for "The Big One," which could be a magnitude 9 earthquake from the Cascadia subduction zone off the Washington coast.

"It makes you think twice about being prepared for a disaster," Sawyer said.

Emergency management officials recommend preparing to be on your own for two weeks in case first responders can't get to you. Bridge could be knocked down, cell service could be nonexistent, and first repsonders will need to prioritize who they aid.

Build a two-week emergency kit for your home and make smaller kits for your car and work. Make a plan with your family now so you're prepared when disaster hits.

Earthquakes that are a magnitude 4 or greater are not rare in western Washington, but they are infrequent. Since 1990 there have been 32 scattered around the area, including Friday’s in Monroe, the 6.8 Nisqually earthquake in 2001, the 5.4 earthquake in Duvall in 1996, and the 5.0 earthquake in Seattle-Tacoma urban area in 1995.

Credit: USGS
This map shows all magnitude 4 or greater earthquakes in Washington state since 1990. The Monroe quake is marked in orange.

RELATED: Californians urged to prepare for 'Big One' after weekend quakes

RELATED: Lessons from California earthquakes: What Seattle should know about 'basin effects'