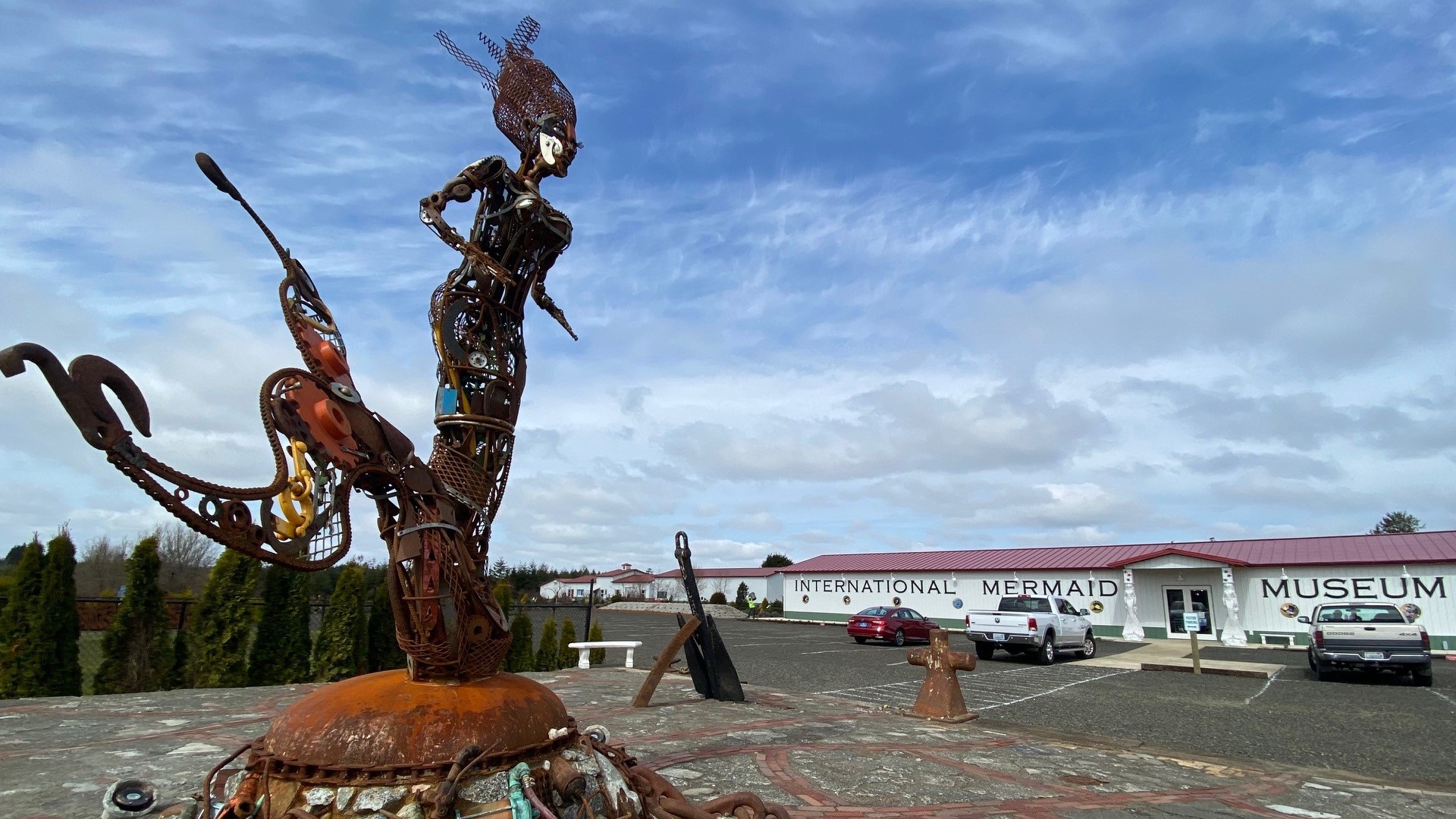 ABERDEEN, Wash. — Next time you head to Washington's coast, you may be distracted by the siren song of a new attraction.

The International Mermaid Museum just opened up on the highway between Aberdeen and Westport. This first-of-its-kind museum feels like a trip beneath the waves, right down to its sparkly 'ocean' floor.

“Well you know as mermaids, we are just spreading glitter everywhere, it's our thing,” said Kim Roberts – the museum’s founder. Kim and her husband Blaine also co-own Westport Winery and Gardens, and they once operated Hawaii’s biggest dive shop. So taking the plunge for this latest venture came naturally.

“I always wanted to be a mermaid when I was growing up, either a mermaid or a lighthouse keeper. And I got to do both having a lighthouse here as part of our winery,” said Kim, referring to the lighthouse that makes Westport Winery a landmark along State Highway 105.

The museum offers mermaid mythology, alongside ocean ecology. There’s also a bit of kitsch, and plenty of pop culture, from Ariel (Did you know her best friend Flounder was not an actual flounder?) to “Splash” to a display featuring a Seattle-born siren: "The most famous mermaid of all is the twin tailed mermaid from Starbucks coffee,” said Kim.

This place has 'International' in its name, but the non-profit museum was built by Washington’s coastal community.

"What I love the most is just that it was a grassroots effort - it was Kim’s vision, she presented it to a couple of people, and just ran with it,” said board member Karyl Vasereno.

Aberdeen architect Jamie Walsh designed and built the twin-mermaid entrance columns and a 12-foot tall scrap-metal siren that beckons to anyone driving by is the work of Tokeland artist Yosef Adams.

Locals donated much of what's inside as well - from mannequin mer-folk to a WWII diving helmet worn during the recovery effort after Pearl Harbor was bombed. Kim said the significance of that historic contribution gives her goosebumps.

Real-life mermaids from Seattle and Portland pods occasionally drop by and lounge in a specially designed grotto. Maranda was there when we visited, combing her hair and posing with young visitors who may be mermaids-in-the-making. There’s also a gift shop full of Mer-chandise, including award-winning Westport-made wines and spirits with mermaid artwork on the bottles that Kim herself painted.

Even though Kim Roberts says she's 100 percent human and simply loves the underwater world because of her past as a commercial fisher-woman and deep-sea diver, we think she secretly may be a denizen of the deep.

The International Mermaid Museum is located at 1 South Arbor Road, Aberdeen, WA 98520 and is open daily from 11 am to 6 pm. Visit their website or call Westport Winery 360-648-2224 for more information.