Bacon and Eggs skatepark putting Wilkeson on the map

Meet the artist behind the big breakfast in the Washington town. #k5evening 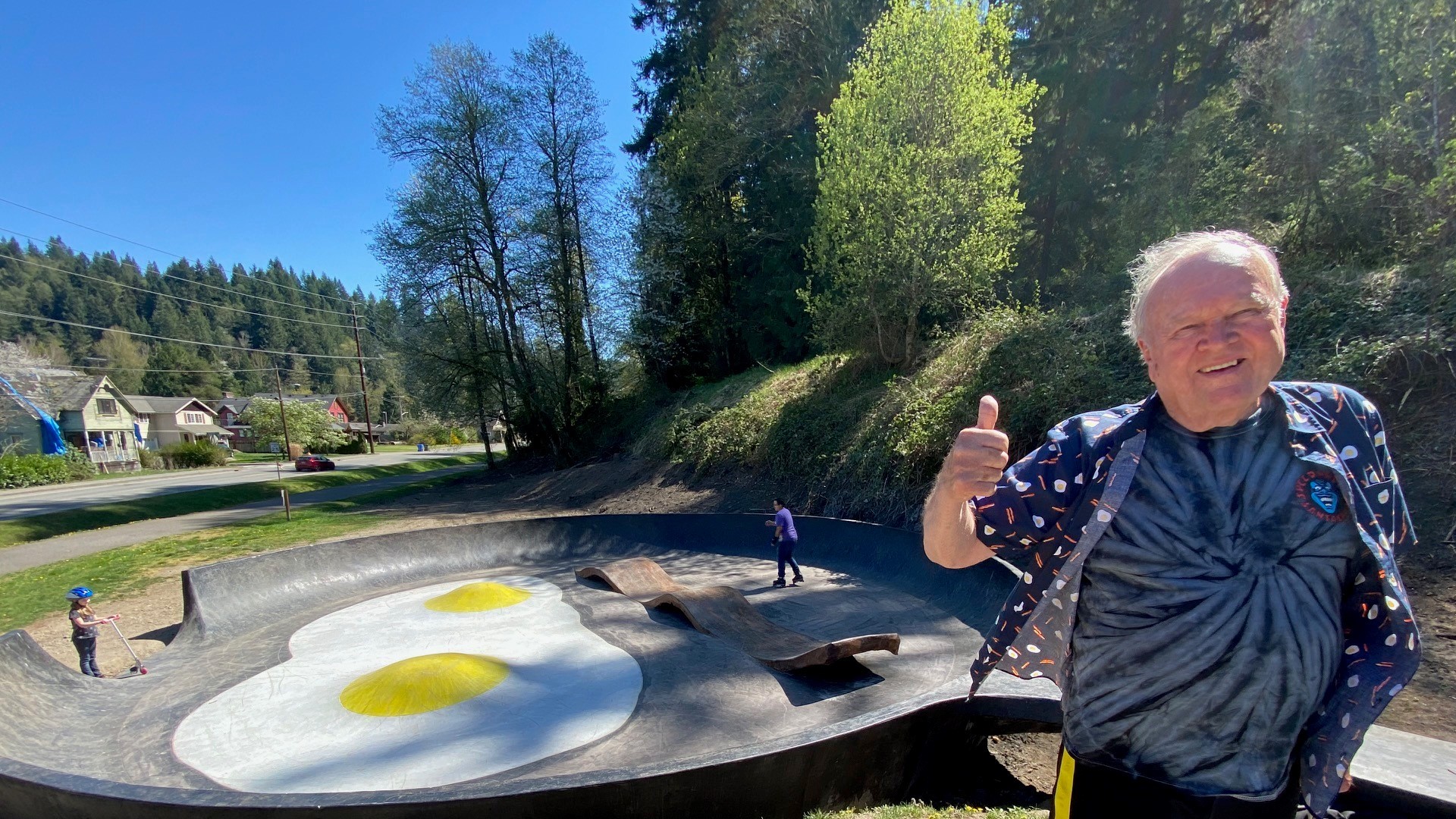 "We're in the Bacon and Eggs pop art skateable sculpture in Wilkeson Washington," said local artist John Hillding, sitting on the edge of a giant piece of bacon.

"I presented the idea to Mark Hubbard about 7 years ago, and I said 'I have this fantasy about bacon and eggs. Could you build something like that? And he said 'We can build whatever you want'."

Mark Hubbard was the founder of Grindline, a Seattle company that builds skateparks. Mark passed away in 2018 but Grindline kept John's big breakfast on the front burner. The project was personal, John used his wife's frying pan for scale. The park finally opened this spring, and now people are coming from all over to ride a thirty-foot-long piece of bacon and cruise two fried eggs that John says are 'over hard'.

"It is putting Wilkeson on the map, on the internet, social media, all the skaters that post, 'This is on our agenda, we've gotta come and skate bacon and eggs!'" Hillding said.

Jade Debolt took a day off work to visit Bacon and Eggs: "We came from Bremerton Washington, about an hour and a half away. We came because I've been watching the frying pan get made the past three years, and we love it!" She added that it's a great place for all ages - a 'good family frying pan'.

Bacon and Eggs isn't John Hilding's first crack at art. He's one of the founders of Bumbershoot - Seattle's long-lived music festival. He hung a gigantic windsock from the Space Needle back in the day.  And he hosted a famous piece of performance art in the '70s called Media Burn - where a custom '59 Cadillac was driven through a pyramid of television sets and flames ensued.

This big all-day breakfast in a small Washington mining town has brought the artist some brand new fans. Hillding says he's glad to see all the use that his new creation is getting.  And he's thrilled to have built an epic pop art monument to a tasty breakfast - and fun on wheels.

"Long after I'm gone kids are gonna be playing in Bacon and Eggs. How cool is that?"

Bacon and Eggs is right off State Highway 165 in Wilkeson - look for it on the right as you're coming into town.